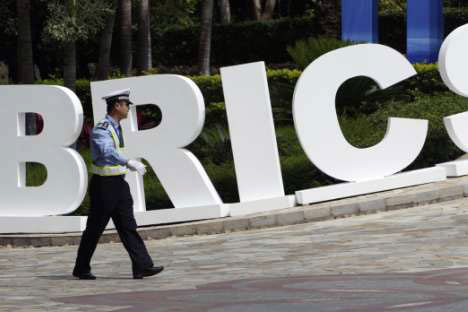 Syrian crisis provides a unique opportunity for the BRICS to emerge as a responsible peacemaker in the world. Source: Reuters / Vostock Photo

The BRICS should declare unequivocally that violence is no means to resolve the Syrian conflict.

That the Syrian crisis is taking new turns with passing days is almost a foregone conclusion. Despite running its third year with loss of about 70,000 people, the crisis in the Middle East is still raging with potential for vaster destruction. In this international crisis the question arises – what kind of roles can BRICS play? And this becomes imminent after the Syrian government officially appealed the BRICS to play an active role to defuse the crisis.

Bouthaina Shaaban, the senior advisor to Bashar al-Assad revealed to the press on March 16, 2013, that she has handed over a letter from Assad to Jacob Zuma, the President of South Africa and the chairman of the forthcoming BRICS summit at Durban. The letter read, “President Bashar al-Assad asks for intervention by the BRICS to stop the violence in his country and encourage the opening of a dialogue, which he wishes to start.”

There is unanimity among the members of the BRICS that the Syrian crisis should be resolved peacefully and through dialogue. Though Russia took a lead role among the group members, the members in their last summit at New Delhi developed a common position on this issue calling for dialogue and peace and opposed any armed intervention. Russian Foreign Minister, Sergei Lavrov in past months made whirlwind tours and diplomatic meetings with the UN and Arab representative, Syrian leaders, and leaders from other countries to develop a common framework on Syria. Russia and China used their veto powers in the United Nations Security Council to oppose sanctions against the war torn country. The members have also opposed any armed intervention or supply of arms to rebel groups to topple the Assad regime. Though the UK and France advocated lifting arms embargo on Syria the EU in its meeting in last week expressed reservation on such a project.

Shaaban made tours to BRICS countries to garner support for a dialogue process in her country. Early this month she visited India and appealed to Indian leadership to play an active role. Shaaban expressed hope that the powerful BRICS could use its clout in playing a meaningful role in Syria by bringing parties together. She stated, “We want India, Brazil, Russia, China and South Africa to make a very strong decision to support a political solution in Syria, to support the right of the Syrian people to decide a future for themselves.”

The Indian foreign ministry expressed “deep concern on the security situation in Syria.” While the rebels revel at the defection of a high ranking military officer from Assad’s army, the situation on the ground is really sordid with daily dance of death and destruction.

The question then arises – what role can BRICS play in this complicated scenario? It is absolutely passé to paint the developments in Syria as a crucible of the Cold War. It also does not make much pragmatism to see Syria as the emerging ground of a new cold war. In the post-cold war globalized world, it is pragmatism that weighs over ideology, if at all there is any clear cut ideology or ideologies that guide/s conducts of nations. The rise of the BRICS is a testimony to this evolving world order. Despite differences between the members, the grouping has stood for a multi-polar world order in which dialogue and cooperation are key principles.

It is necessary to identify what are the exact demands of the two major parties in the Syrian conflict before debating over the roles BRICS can play. The two major parties in the conflict are Assad regime and Syrian National Council. As articulated by Shaaban, Assad regime is now interested in peace and the right of the Syrian people to “decide a future for themselves.”

The reports suggest that Assad is ready to give up power under a peaceful mediation and abide by a fair electoral process. His regime, as suggested by reports, is to ready to abide by a ceasefire that prohibits either parties to engage in violence. The Syrian National Council aims at immediate removal of Assad from power by violent means. That is its first demand. The problematic part of its strategy is that the rebels believe that they can topple Assad from power by violent means. The weapons from Qatar and Saudi Arabia have strengthened the rebels’ resolve. The problem is that the international community including the BRICS is afraid of any such violent resolution of the conflict as envisaged by the Council. The fear of a replication of Libya and further proliferation of radical ideology is a genuine concern. It may be a genuine demand that Assad must be subject to a democratic process, with which perhaps all parties agree, but the question is how to achieve this goal. The rebels’ insistence on violence, as seen since the last two years, has not been working on the ground, rather it has proved a failure.

In this prevailing scenario BRICS can play a constructive role. The Durban summit would likely witness important pronouncements in this regard. The BRICS should declare unequivocally that violence is no means to resolve the Syrian conflict. Besides, it must call all parties including Assad and the Council to shun violence and join a dialogue process. At the summit, the grouping can form a high ranking joint committee of the five countries and dispatch it to meet the parties and pressure them to give up violence. The grouping can go a step further by calling other international powers like the US and the EU in coordinating actions and possibly developing a joint action plan with the help of the United Nation to resolve the crisis. It can also provide humanitarian reliefs to the victims of the violence. The bottom line is that violence must be stopped. After the end of violence it is necessary to initiate an inclusive peace process. Syrian crisis provides a unique opportunity for the BRICS to play a constructive role to defuse the tension and emerge as a responsible peacemaker in the world.