Russians in the Baltics: Forever Foreigners 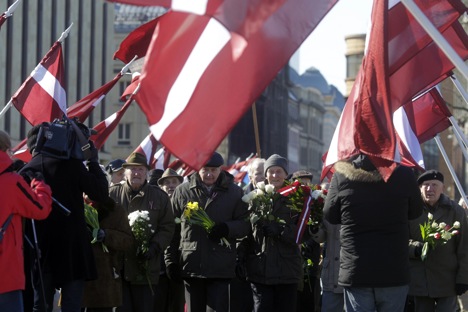 The treatment of Russian minorities by governments in Latvia, Lithuania and Estonia completely goes against the European values of multiculturalism.

In the early 1990s, when the huge Soviet Empire fell to pieces, different large and small states suddenly appeared on the map of Eastern Europe, the Caucasus and Central Asia. This event of great geo-political importance had a tremendous impact on lives of many apolitical people. Many ethnic Russians who had lived in Soviet republics found themselves at once as inhabitants of new states with no clear idea of their future. This impact was felt the most by Russians in the newly formed three Baltic countries: Latvia, Lithuania and Estonia.

Few outsiders know much about the complex history of the region. Despite being members of the European Union since 2004, the Baltic countries remain unknown even to many in the “Old Europe.” From time to time officials in Brussels confuse Latvia and Lithuania, Riga and Tallinn and so on.

The region by the Baltic Sea had always been a battlefield between great countries. In the 13th century separate Baltic tribes were attacked by German crusaders. After a short struggle with the less armed and poorly organised local aborigines, the invaders created their state and the territory of the future Latvia and Estonia got the name of Livonia. The Baltic people became powerless and subservient to their new masters. Lithuanians were lucky to create their own rather mighty principality during the Middle Ages. But having a small population it was incorporated into the Polish State in the 16th century.

Historically, Russia made many attempts to get access to the Baltic Sea. During the Livonian War (1558–1583) Tsar Ivan IV or Ivan the Terrible succeeded in his attempts to destroy the German state, which had been in deep decay for a long time. But mighty Sweden and Poland weren’t happy to see newcomers from the East at their borders. The Russians were repelled and the Swedish Empire begun to dominate in the region.

The Swedes in turn were defeated by the Russian Emperor Peter the Great during the Great Northern War (1700-1721). Livonia became a part of the newly formed Russian Empire for almost two centuries until the Bolshevik Revolution. Being subservient to the Germans for hundreds of years, the Baltic nations now received a privileged place under Russian rule. For example, serfs in these countries gained freedom much earlier than their Russian counterparts.

The revolution of 1917 terminated the large Russian Empire. For the first time in their history, the Baltic nations got an opportunity to form their own independent states. Unfortunately, independence lasted no more than 20 years. The Molotov-Ribbentrop pact divided Eastern Europe, and the Baltic States were bloodlessly incorporated into the USSR. The people in Latvia, Estonia and Lithuania called this ambiguous event as an “occupation” and it has been a burning issue in relations between Russia and the Baltic nations.

The legacy of Soviet rule in the Baltic countries is highly contested. On the one hand, closed borders cut the three nations off from the rest of Europe. During the initial years of Soviet rule, thousands of local people were arrested and sent to Siberia. But repressions were not so one-sided. Many SS soldiers of Baltic origin were spared by the Soviet government. After a short imprisonment they returned to their homelands.  By comparison, Russian, Ukrainian or Belorussian Nazi collaborators were shot without any trial at the moment they were captured.

On the other hand, the Soviet Union gave much to the Baltic nations, spending great amounts of money to raise their economy and create huge industrial complexes and resorts in Latvian Jurmala, Estonian Pärnu and Lithuanian Palanga. The Soviet regime paid a great deal of attention in developing the culture of its national republics. The Baltic countries were a direct beneficiary of this Soviet taste in culture, history and literature, with national song and dance festivals, and cultural exhibitions being organised annually. The Riga Film Studio was famous in the USSR and Warsaw Pact countries.

Ethnic Russians in Latvia in 1989, just a couple of years before the Soviet collapse, formed was 34 percent of the population, in Estonia –30 percent and 9.4 percent in Lithuania. Most of them voted for independence from Moscow, when such referendums were held in 1990.  But they didn’t become equal citizens everywhere like they expected. Only in Lithuania were they given citizenship automatically. Those who had no family ties to Latvia and Estonia prior to World War II did not receive citizenship. They were classified as “aliens,” non-citizens with passports of a different colour without any political rights. They could hardly travel outside their resident countries until the EU and Russia specially opened access for them. When it came to taxes and duties, they had the same obligations as the majority community.

During the first years post-independence, the treatment of Russians by the local population was awful and discriminatory and it remained that way for a long time. It was (and still is) usual for Russians to hear such insults as “occupier,” “Kremlin spies” and a very popular phrase “Take your luggage, go to the station and move to Russia.” The problem is that Baltic Russians don’t consider Russia as their motherland and many of them have never visited the country. They love their resident countries where they are third-generation residents. Russia for them is a land of their ancestors, land of the same faith and a close culture, but nothing more.

To become a citizen of Latvia or Estonia, a member of the minority should undergo a process of naturalisation: pass exams in the local language, history and constitution. It seems to be a justified claim: a person should know the language of the country he lives in. But in the Baltic countries, even passing these tests changes little for Russians. They remain second-rung residents and foreigners forever.

Many Russians don’t want to become citizens of the Baltic country they live in because they are angry and tired after many years of poor treatment. Many others who did get citizenship used it as an opportunity to immigrate to another EU country. People of the older generation believe that they have worked hard whole their lives to create the prosperity found in the Baltic republics and so deserve the right to be citizens without any exams.

Many Russians understand Baltic grievances with the USSR, but they don’t understand why in the 21st century, they should be answerable for the sins of leaders from the distant past.

The mindset of the political class in the Baltic countries is discriminatory and the governments would be happy to cleanse the countries of ethnic Russians. They don’t try and hide this and don’t care much about the fact, that such a mindset is harming relations with the Russia. This ant-Russian ideology and human rights violations have cost the Baltic countries so many economic advantages. Nord Stream is one shining example. The EU, whose principles are based (as claimed) on human rights protection, ignores such obvious problems within their own borders, but likes to judge other states, including Russia. You hardly hear any criticism from Brussels of SS veterans marches, which are held annually in Latvia and Estonia. Russia’s protests are always ignored.

The global economical crisis has hit Baltic countries in the hardest way. Having no natural resources and low industrial potential (what was leftover by the Soviets was terminated or sold for scrap) the Baltic countries seem to be in an economic black hole. Low salaries, high taxes and unemployment are forcing mass emigrations.

If Baltic people migrate only to western countries, Russians have a path to the east. The Russian Federation welcomes migrants of Russian origin, but after coming to the land of their ancestors, Baltic Russians realise that they have little in common with the local people. They look alike and speak the same language without any Baltic accent, but they are foreigners, people from another cultural domain, who were raised in a different social environment. Moscow Russians are more similar to people from distant Vladivostok than with those from nearby Tallinn or Riga.

The treatment of Russian minorities by the governments in the Baltic countries completely goes against the European values of multiculturalism. It is impossible to create a successful country by discriminating against a part of your own population. These people who could be loyal patriots are becoming enemies of their own homeland, as a direct result of the treatment they get. What is happening in the Baltic countries also shows how governments deliberately use nationalism and raise hatred among people to draw them away from real economic problems. Such methods seem to be working, but it is important to stop them by all means, so that the Baltic countries can truly practice the principles of the European Union.

The writer was born in Latvia and now lives in Moscow.