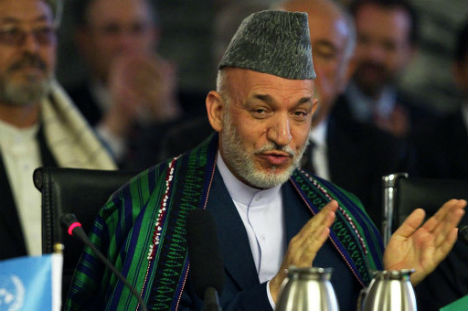 Karzai’s invitation to the Taliban to participate in the presidential elections is going to be a turning point for Afghanistan. Source: Reuters

Moscow has also made it clear that it would welcome the involvement of Pakistan and Iran in settling the situation in Afghanistan.

Russia has urged a “cautious approach” to the recent offer by Afghan President Hamid Karzai to the Taliban for participation in the presidential elections in the war-torn country scheduled to be held in April 2014. Karzai's presidential term is nearing its end, and under the Afghan constitution he is not eligible to run for office for a third term after two consecutive terms.

“It is probably necessary to cautiously approach this offer to the Taliban. But a peaceful settlement process is needed badly. The presence of foreign forces does not solve the declared task there, but on the contrary, serves as a destabilizing factor,” Russian Federal Drug Control Service Chief Viktor Ivanov said a press conference this week.

Ivanov was referring to Karzai’s interview  to German daily Sueddeutsche Zeitung published on Tuesday in which the Afghan President said he wanted the elusive Taliban supremo Mullah Omar to run in the 2014 presidential  elections so that people could “vote for or against him.”

He noted that the Afghan constitution is valid for all Afghans and “the Taliban also should benefit from it.”

Since the beginning of his second term, Karzai has kept a soft instance towards the Taliban, although they have been accused of killing his father, Abdul Ahad Karzai in Quetta, Pakistan in 1999 and his brother Ahmad Wali Karzai in Kandahar in 2011.

Over the last decade, the Taliban under the leadership of Mullah Omar has killed thousands of innocent Afghans, destroyed hundreds of schools and thwarted efforts made for political, economic and social development in the country.

Karzai’s invitation to the Taliban to participate in the presidential elections assumes significance as next year is going to be a turning point for Afghanistan, with NATO withdrawing its troops by the end of the Afghan president’s term. Afghan opposition believes Karzai will go beyond his constitutional remit and try to stay in office, but Karzai has repeatedly dismissed the claim as baseless, stressing that after the presidential election he “will be an ex-President.”

However, one of the Karzai’s main goals to secure stability after NATO troops withdrawal from Afghanistan, is to reach a peace agreement with the Taliban, for which he has regularly called on the Taliban to come to the negotiating table. In his interview to the German daily, Karzai reiterated his call to the Taliban to lay down their arms and participate in the political process.  He also confirmed his government had “sporadic contacts” with the Taliban but that there is no negotiation.

Answering a question as to whether Mullah Omar could be a presidential candidate in the elections, Karzai said, “He can become a candidate for the presidency and give Afghans the opportunity to vote for or against him.”

“The moment I was declared the head of the interim government, I declared complete amnesty to the Taliban from the leadership to everybody else,” he said.

“And the plan was to bring them and have them integrate into Afghan society like all other Afghans,” he added, referring to the Islamic extremists as “brothers.”

Karzai’s remarks come in the backdrop of his visit to Doha, the capital of Qatar, last Sunday to discuss the opening of a Taliban office in the Gulf state, where a team of Taliban envoys and their families have set up base since 2011. Karzai met with Qatari Emir Sheikh Hamad bin Khalifa al-Thani amd Prime Minister and Foreign Minister Sheikh Hamad bin Jassim al-Thani.

The Afghan government has been trying to preserve its key role in future negotiations by securing support from the region’s political heavyweights-Qatar and Pakistan-which are able to influence the militant Afghan opposition.

According to the media reports, Karzai’s government has agreed that the Taliban will be allowed to open an office in Qatar if the group breaks all ties with al-Qaida and renounces terrorism. It may be recalled that the idea for an office to be opened in Doha was announced by the Taliban, in early 2012. Karzai initially had rejected the idea of a Taliban office in a third country. He has been among most fierce critics of the idea, fearing that it could eventually lead to the international recognition of the Taliban and hamper ties with the US. Most recently, he accused his US allies of holding secret talks with the Taliban, a claim denied both by the US and the Taliban.

The Afghan government openly said it would prefer Turkey or Saudi Arabia as a mediator, fearing that the Gulf state would lend the movement international recognition and hamper ties with the US.

The details of Karzai’s talks with his Qatari counterparts in Doha were not disclosed, but Afghan Foreign Ministry’s spokespeson Janan Mosazai explained that the talks covered the conditions for opening a Taliban mission in Doha.

Experts also note the role played by Washington in convincing the Afghan government to adopt a less hostile posture to the Taliban. It is suffice to quote, they claim, the joint statement earlier by the US President Barack Obama and Karzai which stated that the two leaders “would support an office in Doha for the purpose of negotiations between the High Peace Council and the authorized representatives of the Taliban.”

Karzai’s new peace initiative has already received support from Pakistan, which plays a central role in the future Afghan peace process. The US administration has also given its consent to open a Taliban office in Doha.

However, Karzai’s new peace move, like his previous initiatives, was rather coldly received by the Taliban. “The opening of the Taliban office in Qatar is not related to Karzai, it is a matter between the Taliban and the Qatar government,” the Taliban spokesman Zabiullah Mujahid, who is close to Mullah Omar, said.

As Karzai’s remarks over the participation of the Taliban came, representatives from China, Russia and Pakistan on Wednesday held talks in Beijing to coordinate their positions on Afghanistan. The talks followed a similar meeting India, China and Russia held in Moscow recently to assess the unfolding situation in Afghanistan. The participants in the talks said they would back the Shanghai Cooperation Organization (SCO) to play a greater role as NATO troops prepared to pull out of Afghanistan in 2014.

Russia has also made it clear that it would welcome the involvement of Pakistan and Iran in settling the situation in Afghanistan in light of the plans to withdraw NATO troops from country in 2014.

“In the run up to another radical transformation of the situation in Afghanistan after withdrawing the principal number of NATO troops from there, it appears to be vital to thoroughly and systemically analyze the situation and develop the most efficient stance for Russia,” Ivanov said at his press conference.

Ivanov also called for promoting close cooperation with the international community and Afghanistan, “primarily with regional countries, among which Pakistan and Iran should certainly be specially mentioned.”