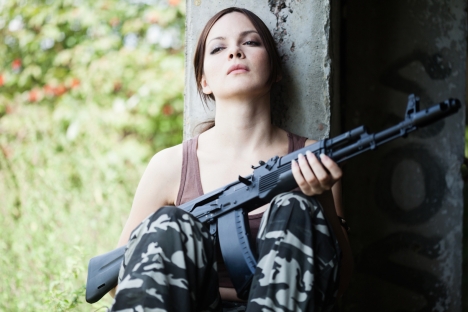 Despite the good intent of the bill, why did Russia, India and China abstain from voting for the treaty?

The Arms Trade Treaty (ATT) was approved by the United Nations General Assembly (UNGA) in a majority vote last week.  Almost all the countries across the globe including major powers have not disputed the intentions of the treaty.

Whether it is Russia or India or the US or any other major player in international scene, none has questioned the intention of the treaty: to regulate arms transfers across the globe. Any follower of international events would agree that opaque arms transfers have led to loss of thousands of lives across the globe. Whether it is killing fields of Congo in Africa or in other parts of world, it is indisputable that civilians become victims of violence. About 750,000 deaths take place annually by arms-related incidents. Religious extremists, drug traffickers and other kinds of trans-criminal organisations have taken advantage of lack of any international mechanism to checkmate illegal flow of arms. Russian Foreign Ministry Security and Disarmament Department Director, and also the head of the Russian delegation at the UN, Mikhail Ulyanov, observed that the ATT “declares good targets,” but added that it is “rather shallow in essence.” As per an estimate, the arms business per year amounts up to $70 billion.

The United Nations Secretary General hailed the ATT as “a victory for the world’s people.” While 154 members of the UNGA voted in favour of the ATT, three members opposed it, and 23 members including India, Russia and China abstained. The question then arises: why despite the good intent of the bill did the three players in international scene, who are also members of BRICS and G-20, abstain from voting? While the opposition of three countries, Syria, North Korea and Iran can be explicable as the treaty might seriously affect the status quo in these countries and threaten current regimes, in the case of RIC (Russia, India and China) the abstention needs further elaboration. This will throw light on some of the nuances underlying the ATT, and also provide new insights as to how to strengthen the ATT and provide it real teeth.

There are differences of perceptions between the powers that affect prospects of cooperation between them on the issue. The linking of the ATT with human rights may be a good argument, but the caveat is how to define human rights, and who will define who is violating human rights of whom. This is indeed a tricky affair. While some powers may use it to bring their detractors under the purview of the ATT, which may be right in some contexts but there is no guarantee that it will not be misused. In absence of any international guarantor in the world in ensuring the just use of the ATT, there is possibility that it will be misused.

There is also another point of contention. As Sujatha Mehta, head of Indian delegation at the UN, argued that the ATT is “weak on terrorism and non-state actors and these concerns find no mention in its specific prohibitions.” Mehta insisted that the ATT does not contain any provision as to how to curb arms flow to religious extremists. As a result even if the ATT is signed and ratified by the members of UNGA, it will not help control the menace of religious extremism and terrorism. India’s concern is understandable as it has witnessed the devastating menace of terrorism in its territory. Russia and China too have suffered this menace. Keeping out this rising phenomenon from the ambit of the ATT may prove one of its weaknesses.

Russia has advocated for the incorporation of a provision in the ATT about transfer of arms to unauthorised non-state authorities, which are not recognised under international law. The provision would have led to ban on transfer of arms to unauthorised non-state authorities. The ATT did not incorporate this provision. It may be argued, though on the basis of conjecture, that the ATT in its current form may not prohibit arms transfer to organisations who claim to be sovereign power of a state, though they do not have legitimacy to rule. This may have implications for conflicts in Middle East or in other parts of the world. Ulyanov advocated for further deliberation on various provisions of the ATT. In his words, “We suggested taking things slowly and refraining from approving or recommending an inadequately thought-out text.”

The ATT is not enforceable now. Only after it is signed and ratified by the requisite members, it can be implemented on the ground. The treaty will be open for signature on June 3, 2013. There is a common agreement that even if the treaty is signed and ratified, it will take at least two or three years for it to take concrete shape. In that sense, the ATT is just in the making. As per the ATT conventional weapons including not only small arms and light weapons but also battle tanks, combat aircraft, warships and missiles, will come under its purview. There are provisions in the treaty which ban arms transfer if the arms would be used for genocide or crimes against humanity or attack on civilians. These conditions are just indeed, but how far their enforcement would remain just in a contested global politics is undoubtedly subject to differing interpretations.

In the United States, there is already a debate going on whether to ratify the treaty or not. Even though it signs the treaty, there will be a strong opposition against the ratification as revealed by the National Rifles Association, which has a strong influence over policy making. A report suggests that the Association could bring 67 members of the Senate, necessary to ratify the treaty, to its side. With the RIC countries already out of the orbit of the ATT, and the US out of it by force of its domestic politics, the fate of ART can be easily imagined. The three major arms exporters out of the scope of the ATT will severely dent the potential of the ATT to enforce a global arms regulation regime.

The current status of the ATT and its prospects can be well explained by the phrase Much Ado about Nothing, the title of the Shakespearean play. Though the ATT embodies noble intentions, it lacks needed support and dynamism. As a result of which, despite jubilation in some circles, the ATT idea may prove a nonstarter unless the major powers come together and develop something concrete and workable.