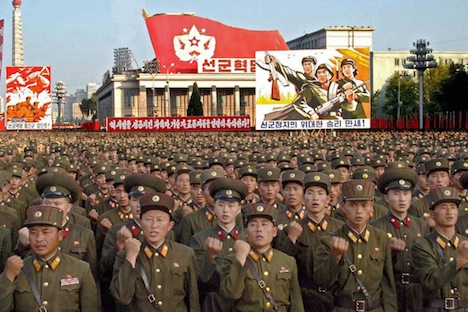 Pyongyang's flaunting of its nuclear weaponry may be an attempt to push for global acceptance of North Korea as a nuclear state. Source: AP

An influx of Korean refugees and exodus of the native population from the Russian Far East, and even hits by stray ballistic missiles made the list of possible consequences of a new war cited by pundits.

Radioactive fallout from South Korean nuclear plants blown up by enemy saboteurs could be, for Russia, the worst consequence of a Korean war – should one happen, Russian analysts said.

“You could have five or six Chernobyls take place over a relatively small territory,” said Alexander Zhebin, who heads the Centre for Korean Studies at the Russian Academy of Sciences' Institute of Far Eastern Studies.

The worst nuclear disaster in history was also on the mind of Russian President Vladimir Putin, who said Monday that if events on the Korean Peninsula take a turn for the worse, it could make “Chernobyl…seem like child’s play.”

An influx of Korean refugees and exodus of the native population from the unsafe – and already depopulated – far eastern reaches of Russia, and even hits by stray ballistic missiles also made the list of possible consequences of a new Korean war cited by pundits.

Russian contingency planning likely includes closing its 14-kilometer-long border with North Korea and putting on full alert both the emergency services and the military, including nuclear submarines, but not intervening, analysts said last week.

But a more likely outcome is that Russia will not be affected at all, even in the unlikely event of war breaking out, all experts interviewed by RIA Novosti agreed.

“Expecting a war just because of North Korean statements is like expecting rapture in the immediate future just because the Pope gave a sermon about sin in the world,” quipped Andrei Lankov, a Russian expert in Korean studies who teaches at the Kookmin University in Seoul.

“I don’t see any real threat for Russia,” said Vladimir Dvorkin, a retired army general who now teaches at the prestigious Institute of World Economy and International Relations in Moscow.

The situation on the Korean Peninsula has been deteriorating ever since mid-February, when North Korea conducted both a nuclear test and a long-range missile launch.

That triggered a suddenly belligerent reaction from Pyongyang, which declared an end to its truce with South Korea; denounced all denuclearization agreements to which it was a signatory; cut off an emergency hotline to Seoul; threatened to attack US bases in Okinawa, Guam and Pearl Harbor; closed a joint enterprise with South Korea in the Kaesong industrial zone; reportedly moved two ballistic missiles to its southern border; and urged the evacuation of all foreigners from both Koreas.

Putin on Tuesday urged “everybody to calm down” and said the conflict should be resolved through negotiations.

If a new Korean war produces radioactive fallout, it is unlikely to come from nuclear bomb strikes, experts said.

Moreover, the country’s leadership is reluctant to violate the international taboo on nuclear attacks, Yevseyev said.

But in the meantime, sabotage or strikes by conventional weaponry against South Korea’s 23 nuclear reactors are highly likely, he said.

In that case, radioactive fallout could reach Russia’s Far Eastern Federal District, which has a population of 6.2 million, experts said.

Even if the nuclear threat is avoided, a war could boost the outflow of people leaving the economically depressed region, said Zhebin of the Centre for Korean Studies. The Far Eastern Federal District lost 20 percent of its population between 1989 and 2013, according to official statistics.

Finally, in the event that the United States joins the conflict – which is almost inevitable, given its 60-year-old military alliance with South Korea – stray American missiles may hit Russian or Chinese territory, Zhebin said. He cited as examples the Yugoslavian and Iraq wars, both of which saw US rockets hit the wrong targets or land far from their intended ones.

Still, there is not much that Russia needs to do – or indeed, can do – in the event of war breaking out.

Most refugees would likely head to China, whose border with North Korea is 100 times longer than Russia’s, Lankov said.

Closing the border would pose no problem for the Russian military, especially given that it is marked by the lower reaches of the deep Tumen River, the expert said.

Emergency services would be put on standby for the cleanup of radioactive fallout, said Yevseyev of the Public Political Studies Centre.

Troops from Russia’s Eastern Military District together with police, emergency services and other departments held a large-scale drill last week to practice handling a nuclear incident, though the training situation envisaged a malfunction on a Russian nuclear submarine rather than radioactive fallout from the Korean Peninsula.

Intercepting stray rockets would pose more of a challenge, because Russia has no strategic missile defense forces in the Eastern Military District, said Dvorkin, the retired general.

But the country would most likely have the Pacific Fleet – including its 10 nuclear submarines – out at sea, though as a precaution, rather than for intervention, Yevseyev said.

Russia’s joint economic projects with North Korea, such as the railroad to a new terminal at the North Korean port of Rason, would be put on hold in the event of war, though a skeletal staff would in any event remain at the Russian embassy in Pyongyang to provide the Kremlin with direct contact with the country's leadership, Yevseyev said.

However, the only way for the Korean standoff to escalate into a full-scale war is for some trigger-happy troops on the ground to start shooting over some misunderstanding and despite the will of either Korea’s leadership, Lankov said.

China, Russia to stand together on missile defense in AsPac

“We don’t think either side would open hostilities deliberately, but there’s currently a high risk of involuntary clashes that could detonate the situation,” Russian ambassador-at-large Grigory Logvinov said last Wednesday.

Pyongyang, weakened by 15 years of economic trouble and natural disasters, stands no chance of winning a full-scale war and knows it, said Zhebin of the Center for Korean Studies.

South Korea is bound to win a prospective second Korean war – but this is what Seoul fears the most, said Lankov of Kookmin University.

The human toll would likely be immense, given that Seoul, with its population of 10 million, is within range of North Korean artillery, said the analyst, himself based in the South Korean capital.

Furthermore, the post-war reconciliation effort would set back South Korea for decades, given its income gap with its northern neighbour, Lankov said. South Korea's GDP was 17 times that of North Korea in 2011, according to South Korea’s central bank, or about 30 times higher, according to Lankov’s estimate.

The current crisis evokes a definite sense of déjà vu because, as all experts noted, North Korea is fond of sabre rattling.

Pyongyang last warned of a war with South Korea in 2009; last year, it even threatened surgical strikes against the offices of South Korean media in central Seoul – but no newsrooms across the world have so far ended up on the wrong end of a North Korean missile.

Although the concrete goals of the North Korean leadership can only be guessed at, an attempt to secure more foreign aid is a plausible theory, analysts agreed.

North Korea received about 12 million tonnes of food from foreign donors over the past 15 years, according to the World Food Programme, with about half of that coming from Japan, South Korea and the United States, although the latter two mostly cut their food supplies to Pyongyang after 2009. About 45 percent of North Korea’s food currently comes from China, according to the Council on Foreign Relations, an independent nonpartisan think-tank based in New York.

The expectations of blackmail were echoed by South Korean President Park Geun-hye, who spoke Tuesday of an “endless vicious cycle of [North Korea] creating crises before reaching compromises in exchange for aid.”

Pyongyang's flaunting of its nuclear weaponry may also be an attempt to push for global acceptance of North Korea as a nuclear state, similar to India, Pakistan and Israel, Zhebin said.

Recognition of North Korea’s nuclear status was designated a strategic goal for the country at a session of the central committee of the ruling Workers' Party of Korea in late March. The decision was criticized by the Russian Foreign Ministry as defying the UN Security Council’s non-proliferation efforts.

These, too, have happened before, most notably the 2010 sinking of the South Korean corvette Cheonan, blamed by Seoul and Washington on a North Korean torpedo.

“But the North doesn’t give warning when it really intends to shoot,” said Lankov, who predicted a minor incident closer to the end of the year.