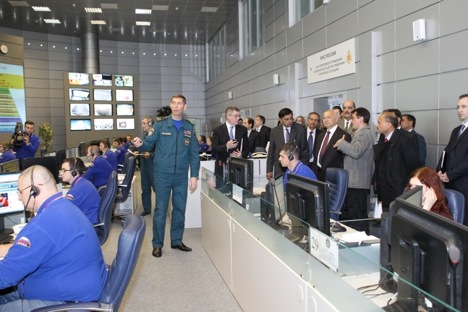 During his visit to Moscow Union Home Minister Sushilkumar Shinde attended the Russian National Crisis Management Centre. Source: Embassy of Russia in the Republic of India

India has already set up a National Disaster Management Authority and is planning to create a high-tech crisis management centre, although the process for establishing such a centre is still at its very initial stage.

Russia has offered technical help to India in setting up a central crisis management centre to effectively meet the challenges from natural and man-made disasters. The offer came during the talks between the Russian Emergency Situations Minister Vladimir Puchkov and  Union Home Minister Sushilkumar Shinde who paid a three-day visit to Moscow, last week.

The idea of setting up a crisis management centre in India on the model of Russian National Crisis Management Centre (NCMC), had, for the first time, been proposed by the-then Home Minister P. Chidambaram during his talks with the-then Russian Emergency Situations Minister Sergei Shoigu, in Moscow, in June 2011.

In a way, Chidambaram as Union Home Minister revived the interaction between the concerned sides of the two countries by making a visit to Moscow after a long hiatus of  about 15 years during which he held high-level security dialogues with top ministers and officials to closely cooperate in disaster management.

Before holding talks with Puchkov on April 10, Shinde took a tour of the NCMC, in order to get the first hand information about the layout and equipment of the Centre, special features of interaction of systems and subsystems of the Russian Unified System of Prevention and Elimination of Emergency Situations.

“Russia has the latest monitoring and forecasting system and we would like to learn many things here,” Russian Emergency Situations Ministry quoted Shinde as saying during the talks  with Puchkov after his tour of the NCMC.

Noting that Russia and India were widening their cooperation in the area of emergency response, Puchkov urged India to work together on developing systems of space monitoring, observation and laboratory control and exchange information on the results of research and studies and plan joint research projects.

"The sides intend to cooperate in scientific researches and studies, forecasting and gathering information during emergency situations. In addition, India is planning to establish the centre similar to the National Crisis Management Centre of the Russian Emergency Situations Ministry, for that the Ministries are going to consolidate their cooperation and adopt each other’s practices,” Russian Emergency Situation Ministry said in a statement after the talks between Puchkov and Shinde.

Russia has a state-of-the-art National Crisis Management Centre, which keeps real time record of each and every case of accidents and disasters in the country. The Centre has highly mobile infrastructure that can airlift rescue and relief teams into any part of Russia within hours.

India has already set up a National Disaster Management Authority (NDMA) and is planning to create a high-tech crisis management centre, although the process for establishing such a centre is still at its very initial stage.

According to the experts, it may take some more time before the idea could take a concrete shape with its all-embracing plan for the construction of such a centre, including possibly, with its network at the level of states in the country. To build such a crisis management centre requires huge infrastructure, funds and a well-coordinated mechanism for cooperation with Russia, they pointed out.

Established in October 2008, by a decree of Russian President, the National Crisis Management Centre, is the daily management body of the Russian Unified System of Prevention and Elimination of Emergency Situations. In the past few years, the NCMC has been developing in accordance with the growth of the task range of Russia’s EMERCOM in the present period, the necessity of shifting to new management technologies and the increase of interdepartmental interaction efficiency.

The rescue and relief workers and professionals of the Russian Emergency Situations Ministry (EMERCOM- acronym of “Emergency Control Ministry”) remain ready “24 hours a day, 7 days a week” to respond to any emergency situations, anywhere in the country or abroad. Selflessly and tirelessly fulfilling their missions, thousands of professionals at EMERCOM save a life every 12 minutes, according to the official statistics.

“The employees of EMERCOM perform heroic deeds practically every day. And it is very good that the Ministry activities are developing and improving, as there is nothing more important than a human life,” Russian President Vladimir Putin said recently praising highly the effective and useful work by the NCMC.

One of the main tasks of the Russia’s NCMC is the acceleration and optimization of emergency response activities with the use of modern technologies. In case of natural and man-made disaster, its state-of-the art-technologies, allow the Federal Operational Sections on Emergency Relief to hold meetings on on-line to prevent and eliminate the consequences of the calamities and provide relief to the needy people.

For example, recently during the elimination of the consequences of the armed conflict in South Ossetia and the Sayano-Shushenskaya Hydro- Electric Power Station accident, the heads of the Federal Ministries and Departments were able to hold meetings on-line and discuss the problems with the operational groups working in the emergency areas via video conference call facility. As a result, officials were able to take quicker management decisions to carry out more efficient relief operations during major emergency situations.

The NCMC also carries out emergency monitoring and forecasting, information cooperation tasks aimed at providing safety to the population and territories on the federal, interregional and regional levels and management, organization and implementation of interdepartmental cooperation while solving the tasks on emergency prevention and relief.

Currently, the NCMC, conducts continuous monitoring of the Russia's territory and the state of industrial facilities by means of the “Antistikhia” (anti-disaster), Unified Information System on Sea (ESIMO), All-Russian Comprehensive Informing and Warning System (OKSION), “Tsunami,” the system of objective control of objects.

It also collects automated information about the economic entities by means of Unified Dispatch Service “112” through regional crisis management centres and issues the integrated data to the management and automatically inform the population in case of a threat or any information about an emergency with an opportunity of a feedback in real time mode by using the All-Russian Comprehensive Informing and Warning System.

In the past few years, following the establishment of the NCMC, Russia’s EMRCOM has immensely expanded the application of satellite data for the solution of tasks presented by the Russian Emergencies Situations Ministry. As of today, the departmental space monitoring system is not only functioning but it is continuously improving.

The NCMC has considerably increased the application of space technologies in sphere of satellite imagery, since December 2008 when the Ministry decided to hand over the daily operation of the Emergency Situations Space Monitoring System to the newly created Centre. A specialized geo-portal on the basis of space data, which is one of the main information resources for everyday activities of Real-Time Operations Desk at NCMC, was also loaded into the server of NCMC recently.