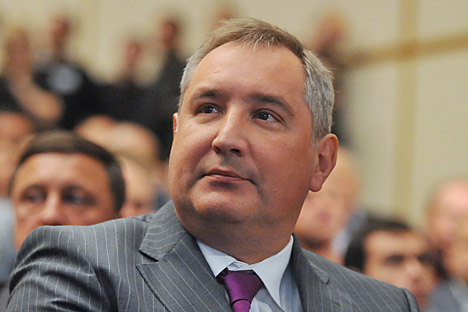 Deputy Prime Minister Dmitry Rogozin is concerned that poorly upheld border controls could slow down the process of introducing visa-free travel between Russia and Europe.

Citizens from other former Soviet republics may be barred from entering Russia without foreign-travel passports as early as this year as Russia lobbies for visa-free travel with Europe.

“I think it is necessary in the near future to stop people from coming into the country with documents that don't properly identify the holder,” Deputy Prime Minister Dmitry Rogozin said during a visit to a train stop in the Astrakhan region as he toured the rail line between Moscow and Dushanbe, Tajikistan.

Rogozin, whose portfolio includes oversight of border issues, expressed concern that poorly upheld border controls could slow down the process of introducing visa-free travel between Russia and Europe.

“We want to achieve a certain liberalisation of relations with the EU, including visa-free travel, but we will never be allowed into Europe if we continue to manage our own borders like this,” he said Sunday.

He noted that President Vladimir Putin himself has asked both houses of parliament to implement the new border controls no later than 2015.

“The government is responsible for the implementation, and it is possible that these measures can be taken more quickly, particularly regarding the railroad to Tajikistan,” Rogozin said, according to Interfax.

He said the changes on the Tajikistan line should be made within “a couple of months.”

On Monday, the Federal Security Service's border control agency proposed closing the railroad connection to Tajikistan altogether, but Rogozin rejected that as “radical,” saying the border issues between the countries should be examined “in a spirit of partnership,” Interfax reported.

Citizens of many former Soviet republics are allowed to travel to Russia with internal-travel documents rather than the standard foreign-travel passports required of travellers to Western countries.

Rogozin was joined in his inspection of the rail link to Tajikistan by Gennady Onishchenko, Russia's chief sanitary official. Onishchenko criticized the dining cars used on the route, saying they were “not intended for the transportation of people” because they used dirty cutlery and lacked refrigeration.