The other side: A North Korean point of view 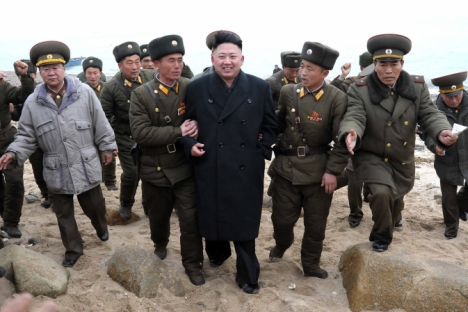 Even if DPRK was a dictatorship, is that a ground for invasion? Source: AP

The Democratic People’s Republic of Korea is facing an existential threat and the possession of nuclear weapons is the only way to ward off an American-led misadventure.

It is in fashion to condemn the Democratic People’s Republic of Korea (DPRK), to call the country a rogue nation and to insult its leader by labelling him a ruthless dictator. In this column, I would like to express my personal views as a proud citizen of a sovereign and peace-loving nation: A country that has never invaded another nor instigated conflict in the near or far abroad.

Today, DPRK faces an existential threat. The global hegemon, the United States of America has thousands of men and a dangerous arsenal stationed in its puppet regime in the so-called “South Korea.”  I say so-called because the Korean nation has existed long before the Americans and their subservient nations divided the peninsula. The people of this great nation want to live in peace and harmony, but the Western world, which has a policy of uniting its countries (European Union) and dividing and Balkanising the rest of the world to profit from such divisions, wants there to be permanent conflict in Korea.

The US and its European allies do not respect Asia. Instead they gain immensely from dividing and making Asian nations fight. Take for example, the division of India on questionable religious grounds. The US benefitted from this British policy and enjoys playing India against Pakistan. America sells weapons to both countries and encourages hatred between them so that this blood money can fuel unsustainable lifestyles in places like California.

Nations that stand up to the US are victims of regime change if they can only defend themselves with conventional weapons.  Saddam Hussein paid with his life and the life of a million Iraqis because he chose to not develop nuclear weapons. The only deterrent for the US in its quest to have puppet and slave regimes all over the world is nuclear weapons.  Pakistan is an example of a country that exists now because it has nukes. The country is making a fool out of America by helping, housing and aiding the Taliban, which will walk back into power when the American-led coalition of cowards leaves the country with a job not done. The US does not have the courage to fight Pakistan in a war because the latter has nukes.

If the DPRK exists today, it is because of these very same nuclear weapons. The country also has the benefit of having true and unconditional friends like Russia and China. These two great powers always come to the aid of a brotherly nation like DPRK when the need arises.

I would now like to address some of the claims against my country. The first such false claim is about DPRK being a dictatorship and ruled by a single family. I agree that Korea is ruled by a family but it is governed, like most countries, by professional bureaucrats and officials. There is almost no interference in the day to day life from the family. Even if DPRK was a dictatorship, is that a ground for invasion? Why select us? The world is full of so-called dictatorial regimes. Many of these regimes are proud proponents of an outdated ideology that calls for violence around the world. Since they submit themselves to the will of the US, they are safe from ugly American threats.

There are claims that the DPRK regime is barbaric and full of insane people. Such claims should not need to be dignified with a response. But I ask you, the readers, a question. Which is the first and only country to use a nuclear bomb? The man responsible for this act of barbarity, was none other than Harry S Truman! What about chemical weapons? The answer is the same: USA. So, the greatest threat to world peace has always been the evil and insane Americans. The world needs no reminders that America has the largest stockpile of weapons of mass destruction. This is a country which is insane enough to use them.  Our friends the Russians and Chinese never used their nuclear arsenal, showing their great degree of responsibility.

As a Korean, I stand by the DPRK in this critical time when the US and its puppet Korean regime in Seoul are indulging in the worst kind of provocation.  If this alliance indulges in any kind of misadventure its own citizens will face the consequences. As the Americans says, the ball is in their court. Do we want to leave a peaceful world for our children or a world destroyed by nuclear war? If it is the second option, rest assured that the Americans would be solely responsible for it with their penchant for causing troubles all around the world and trying to fight a country perfectly capable of defending itself.

The writer is a North Korean citizen and is not employed by the country’s government. The Russia & India Report agreed to withhold the author’s real name to protect his/her identity.