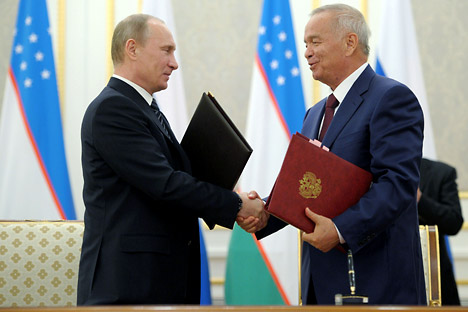 In a rare sign of warming of relations this spring, Russia and former Soviet Central Asian Republic of Uzbekistan have agreed to join hands to meet the threats from Afghanistan after the pull out of US-led NATO troops from the war-troubled country in 2014.

Leaving  behind long-strained Moscow-Tashkent ties, Russian President Vladimir Putin and his Uzbek counterpart Islam Karimov during their talks in the Kremlin on Monday decided to take forward the bilateral ties in view of the looming dangers of  terrorism and illegal drug-trafficking spilling over to Uzbekistan from Afghanistan following the planned withdrawal of US troops. The two leaders made it amply clear at their joint press conference in the Malachite Hall after the talks that security cooperation between Moscow and Tashkent, was high on the agenda of bilateral negotiations in Moscow.

Karimov had arrived in Moscow on his two-day official visit, amid ongoing rumours about his poor health. In March, the 75-year-old Uzbek leader appeared in public to disappear again for sometime in what the exiled Uzbek opposition said was an enforced absence due to a heart attack. His daughter Gulnara, an Yoga enthusiast, dismissed the opposition’s allegations about his ill health as baseless.

Media reports hinted Karimov took his trip to Moscow, to mend Tashkent’s relations with the Kremlin in light of the terrorist threats to the Central Asian country bordering Afghanistan after the withdrawal of US troops. Karimov had last visited Moscow for bilateral talks in April 2010, although he attended a regional summit in the Russian capital in May 2012.

Russia’s relations with Uzbekistan have almost always been bumpy and tempestuous in the past years after the collapse of the Soviet Union. Karimov has fiercely opposed the Moscow’s construction of two hydro-power dams in Kyrgyzstan and Tajikistan, claiming the dams would choke off much downstream water for agriculture in Uzbekistan. He even warned of “water wars.” He was also irked over Russian supply of weapons to Bishkek and Dushanbe.

Russia has been alarmed over the growing cooperation between Taskhent and Washington after Uzbekistan withdrew from the regional security group, the Collective Security Treaty Organization (CSTO), in June 2012. Washington’s promise to “gift” Uzbekistan some Afghanistan “leftovers” of arms in return for facilitating the pull out, have really been a major concern for Moscow.

As the situation in the region is quite unstable, Russia fears that US intention of creating new military bases or supply arms to Tashkent could result in new conflicts. It claims no matter how heavily arsenals are guarded, terrorists and radical extremists are likely manage to get access to the arms to be used for terrorist activities.

During the talks with Putin, the Uzbek leader emphasized Russia’s stabilizing role in the Central Asian region. He called for Moscow’s “proactive measures” to be taken to maintain stability in the region.

“The prospect of allied forces leaving Afghanistan makes the situation unpredictable, so we need consultations on these issues,” Interfax news agency quoted Karimov as saying at the meeting in the Kremlin. He warned that the risks were particularly real in the run up to the withdrawal of NATO forces from Afghanistan.

“The consequences of the expansion of terrorism, extremism, and religious radicalism could be far worse than open war,” he stressed.

“We discussed in detail the situation in Central Asia of course, and spoke about the issues related to the withdrawal of international coalition forces from Afghanistan in 2014,” Putin said in a statement at the joint press conference after the talks with Karimov.

“We agreed to keep monitoring this issue closely and coordinate possible future joint steps, in particular the possibility of providing any needed assistance to Afghanistan’s leadership to help stabilize the military and political situation and fight drug trafficking, terrorism and extremism,” he noted.

In his statement at the press conference, Karimov took pains to explain at length that there was no need to convince anyone that “terrorism and extremism” were all making their impact felt in the Central Asian region. “This is the reality that we all have to deal with today,” he said.

“The upcoming withdrawal of peacekeepers from Afghanistan after 2014 (the process has essentially already begun) could lead, in my opinion, to negative developments in the region. We cannot deny these problems,” he stressed, pointing out, in this context, that his talks with Putin assessed “the real state of affairs in the region, at this time, when the situation is changing very fast.”

The Uzbek President expressed the fear that the completion of withdrawal of the NATO forces from Afghanistan in 2014 could not only lead to civil war in Afghanistan itself, but, most important, it could increase tension throughout this whole vast region.

Karimov was referring to the situation in Uzbekistan during the 1990’s, following the break-up of the Soviet Union when the Taliban control in Afghanistan led to increased radical Islamic terrorism in the region. The Islamic Movement of Uzbekistan (IMU) fought together with the militants in Afghanistan and carried out bombings in Uzbekistan and kidnappings in Tajikistan and Kyrgyzstan. In 2004, the Islamic Jihad Union (IJU) carried out suicide bombings in Uzbekistan. These militant groups have, according to media reports, taken shelters in the porous areas of Af-Pak borders, and may cross over to Uzbekistan as soon as NATO troops pull out of Afghanistan.

“It is hard to find anyone today who would be able to tell us now what things will be like in Afghanistan by the end of this year or the end of next year,” he said, underlining the necessity of Russia’s presence in Central Asia as “an important factor” in cementing peace and stability and preventing the “creeping expansion” of extremism and radicalism in the region and beyond.

He also vowed to “expand and deepen” Uzbekistan’s cooperation with Russia in the UN, SCO, CIS and other influential international organizations, expressing in this respect his “particular respect” for Russia’s place and role in further developing the Commonwealth of Independent States (CIS).

According to the experts, since Uzbekistan is no longer a member of the CSTO, Russia taking a balanced approach, will focus more on Moscow-Tashkent “bilateral partnership” in terms of fight against terrorism, extremism, illegal drug- trafficking and organized crime, in the region.