What the world really needs from the BRICS 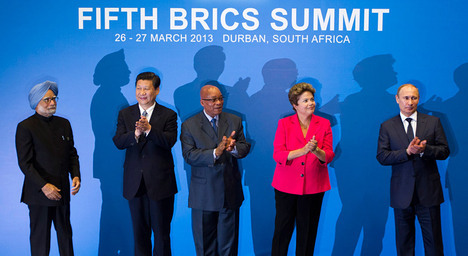 The 5-nation grouping should focus on greater leadership on today's great global issues.

In 2001, Goldman Sachs' Jim O'Neill famously coined the term BRIC to characterize the world's four largest developing economies — Brazil, Russia, India, and China. But, more than a decade later, just about the only thing that these countries have in common is that they are the only economies ranked among the world's 15 largest (adjusted for purchasing power) that are not members of the OECD.

The four countries have very different economic structures: Russia and Brazil rely on commodities, India on services, and China on manufacturing. Brazil and India are democracies, while China and Russia are decidedly not. And, as Joseph Nye has written, Russia is a superpower in decline, while China and (less markedly) the others are on the rise.

Yet, in a strange case of life imitating fantasy, BRICS — the original four countries, now joined by South Africa — have formed a grouping of their own with regular meetings and policy initiatives. Their most ambitious effort to date is the establishment of a development bank.

At their meeting in Durban in March, the five countries' leaders announced that their "New Development Bank" will focus on infrastructure investment in developing countries, which, they said, was constrained by "insufficient long-term financing and foreign direct investment." They pledged to make an initial capital contribution to the bank that would be "substantial and sufficient for the bank to be effective in financing infrastructure." A second initiative announced in Durban is the creation of a $100 billion contingent reserve facility to deal with "short-term liquidity pressures."

It can be cause only for celebration that the world's largest developing economies are regularly talking to each other and establishing common initiatives. Nonetheless, it is disappointing that they have chosen to focus on infrastructure finance as their first major area of collaboration.

This approach represents a 1950s view of economic development, which has long been superseded by a more variegated perspective that recognizes a multiplicity of constraints — everything from poor governance to market failures — of varying importance in different countries. One might even say that today's global economy suffers from too much, rather than too little, cross-border finance.

What the world needs from the BRICS is not another development bank, but greater leadership on today's great global issues. The BRICS countries are home to around half of the world's population and the bulk of unexploited economic potential. If the international community fails to confront its most serious challenges — from the need for a sound global economic architecture to addressing climate change — they are the ones that will pay the highest price.

Yet these countries have so far played a rather unimaginative and timid role in international forums such as the G20 or the World Trade Organization. When they have asserted themselves, it has been largely in pursuit of narrow national interests. Do they really have nothing new to offer?

The global economy has operated so far under a set of ideas and institutions emanating from the advanced countries of the West. The United States gave the world the doctrine of liberal, rule-based multilateralism — a regime whose many blemishes highlight the lofty principles according to which the system has generally functioned. Europe brought democratic values, social solidarity, and, for all its current problems, the century's most impressive feat of institutional engineering, the European Union.

But these old powers have neither the legitimacy nor the power to sustain the global order into the future, while the new rising powers have yet to demonstrate which values they will articulate and promote. They have to develop their vision of a new global economy, beyond complaints about its asymmetric power structure. Unfortunately, it is not yet clear whether they have the inclination to rise above their immediate interests in order to address the world's common challenges.

Their own development experience makes countries like China, India, and Brazil resistant to market fundamentalism and natural advocates for institutional diversity and pragmatic experimentation.

They can build on this experience to articulate a new global narrative that emphasizes the real economy over finance, policy diversity over harmonization, national policy space over external constraints, and social inclusion over technocratic elitism.

But they must stop being supplicants, and act like real leaders, understanding that others, too, including advanced countries, face challenges that sometimes require policies that put the domestic economy first. And they must work to uphold the bedrock principles of the global economy that have served it — and them — so well in the last 60 years: non-discrimination and multilateralism.

Ultimately, though, the BRICS must also lead by example. The human rights practices in China and Russia, and their suppression of political dissent, are incompatible with global leadership. These authoritarian regimes must reform themselves at home if they are to exert any kind of moral claim abroad.

Dani Rodrik, professor of international political economy at Harvard University, is the author of "The Globalization Paradox: Democracy and the Future of the World Economy."