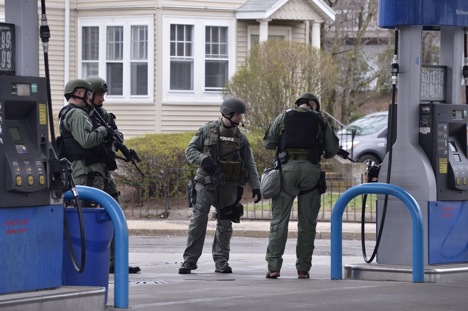 Estimates of ethnic Chechens in the Boston area vary from 20 to 40. The diaspora has been shaken by the emergence of two of its young members as the main suspects in last week’s deadly twin bombings.

Echoes of Chechnya are everywhere at this small suburban Boston homestead.

Traditional ram’s wool hats hang on the walls; a computer monitor glows with the green of the Chechen flag; and the sapling of a medlar, an ancient fruit-bearing tree rare in America but common in the North Caucasus, awaits summer in a backyard garden.

“It makes me feel at home, because that’s the tree originally that that I grew up around, the tree that I used to see everywhere in Chechnya when I went around in the woods as a kid,” said Magomed Imakaev, speaking at his home in Needham where he moved in 2004 as a refugee from the war-battered region.

Imakaev, 27, is part of a small community of ethnic Chechens in the Boston area that began putting its roots down here more than a decade ago in the wake of two bloody wars between Russian federal forces and local armed groups.

It is a diaspora that has been shaken by the emergence of two of its young members as the main suspects in last week’s deadly twin bombing of the Boston Marathon that killed three people and wounded more than 180 others.

The older suspect, 26-year-old, Tamerlan Tsarnaev, was killed in a chaotic shootout with police early Friday. His brother, 19-year-old Dzhokhar Tsarnaev, was captured alive but seriously injured. He remained Sunday in critical condition at a Boston hospital.

“I think everyone is still in the shock phase that this thing happened,” Imakaev said.

The Boston area is home to more ethnic Chechens than any other metropolitan area in the United States, as many US cities have refused to accept asylum-seekers from Russia’s violence-ridden North Caucasus region, according to Glen Howard, president of the Jamestown Foundation, a Washington-based nongovernmental organization highly critical of Kremlin policy in Chechnya.

There are around 40 Chechens living in the Boston area out of a total of 200 “disbursed all over” the country, including in Michigan, California and Oregon, Howard, whose organization has offered support to Chechen asylum applicants in the United States, told RIA Novosti.

Nicholas Daniloff, a former foreign correspondent for U.S. News & World Report with close ties to Boston’s small contingent of Chechens, estimates there are 20 to 30 currently residing in the area. He disagrees with Howard’s claim that Boston has attracted the bulk of the diaspora in the United States, however, and that other major cities are less friendly to Chechen asylum-seekers.

“As far as I knew, they have settled also in Chicago, Seattle [and] New York,” Daniloff, a professor at Northeastern University in Boston, told RIA Novosti.

There is no official data on the number of ethnic Chechen émigrés living in the United States, though a majority of those who settled here fled Chechnya between 2000 and 2002, Daniloff said.

Imakaev, who lives with his mother, wife and four children in a two-story home in a public housing complex, said he knows of five or six Chechen families in the Boston area.

Two other Chechen families live nearby, including his sister’s family, Imakaev said. The others are spread out around the greater Boston area and are not tied together through any sort of centralized organization, he said.

When he’s not busy doing freelance home construction jobs or studying to get his commercial driver’s license, Imakaev said, he will occasionally get together with some other Chechen and Russian men to play soccer.

Six weeks ago one of those young men on the field was Tamerlan Tsarnaev, Imakaev said.

“He was very nice, always smiling,” he said, though he added that his family had minimal contact with the Tsarnaev family. “Always fun and joking – a very nice guy to be around.”

Boston was briefly the home of the most prominent Chechen to be granted political asylum in the United States, Ilyas Akhmadov, who served as “foreign minister” for the Chechen rebel government that gained de-facto independence from Moscow following a brutal two-year war with Russian federal forces that ended in 1996.

Akhmadov fled Chechnya in 1999, shortly before the second Chechen conflict, which brought the region back under Moscow’s control, along with other rebel leaders who declared themselves a government in exile.

He made his way to Boston because he had friends in the area, including Chechen surgeon Khassan Baiev, a physician who treated the wounded on both sides of the conflict during the wars in Chechnya, including the notorious warlord Shamil Basayev who was killed in 2006.

Akhmadov’s application for political asylum in the United States was met with resistance by some officials in Washington who worried about his possible ties to terrorists.

But he received support from senior US lawmakers and dignitaries as well, including former Secretary of State Madeline Albright, and in 2004 a Boston immigration judge granted the asylum request after the federal government halted its challenge.

The decision sparked criticism at the time from Russian President Vladimir Putin, who said the United States had granted asylum to a “terrorist envoy.”

According to a 2005 profile of Akhmadov in the Washington Post, the rebel official developed a keen appreciation for the iconic Boston beer Sam Adams but that he urged the author not to include that detail in the story.

Reached by telephone in New York City, where he now resides, Akhmadov described the Sam Adams anecdote was simply “a silly joke” and that he has not had a drink in a “long time.”

Like Imakaev and other ethnic Chechens with ties to Boston, Akhmadov took pains to distance the suspects in the terrorist act from Chechnya, noting that they came to the United States after living in Kyrgzystan and neighboring Dagestan.

“They were notional Chechens,” Akhmadov said. “They never lived in Chechnya.”

Akhmadov called the bombings “hideous savagery” and said the news that the two brothers were suspects was “shocking for all of us.”

“I had never heard about these people,” he said of the Tsarnaev family.

Baiev, the Chechen surgeon, said in a statement to RIA Novosti that actions of the suspects “were truly despicable” and that the bombing has “cast a terrible shadow over all the Chechen people and Chechnya.”

“I can barely find words to express my sorrow over this event which has left us mortally ashamed,” he said. “We, who have deep ties to our original homeland of Chechnya and our adopted country the United States, want you to know that our hearts go out to all the victims of this tragedy.”

He says he feared retribution from Russian authorities for treating the warlord, who masterminded numerous horrific terrorist attacks in Russia before he was killed, and also from Chechen extremists who might target him for treating Russians.

Baiev was brought to Boston by Physicians for Human Rights, a Boston-based organization that investigates human rights violations, according to Daniloff, a friend of Baiev’s who co-authored a book with him called “The Oath: A Surgeon Under Fire.”

He currently travels back and forth between the United States and Chechnya, but his family still maintains ties to Boston, according to people close to the Chechen community here.

Baiev was out of the country and could not be reached for comment, though he passed on his statement on the Boston bombings through Daniloff.

Many of the Chechens who have settled in Boston and other US cities seek out manual labour jobs that allow them to capitalize on the resourcefulness and tenacity acquired while growing up amid destruction and harsh climes in Chechnya, Imakaev said.

“If the houses are destroyed by shelling and bombing, what else are you going to do?” he said. “Whoever is dead is buried. The rest who are alive have to live on and move on. So everybody gathers and puts things together, clean it up, and try to rebuild.”

Daniloff said he has known Chechens who became auto mechanics, house painters and construction workers after settling in the United States.

Chechens, like the peoples of neighbouring Dagestan and Ingushetia, are “very hard workers,” Imakaev added.

This strength was noted by the boss of Anzor Tsarnaev, an auto mechanic and father of the suspected Boston Marathon bombers, who called the elder Tsarnaev “one of the toughest guys I’ve ever known,” The Boston Globe reported.

A foreman at the repair shop where the father worked several years ago told the newspaper that he once saw Anzor Tsarnaev changing a car transmission while working in freezing temperatures and snow.

It is this kind of resilience that Imakaev worries his children will not learn growing up in the tranquil surroundings of suburban Boston. He would like his four children to return to their home outside the Chechen capital of Grozny to finish high school, after which it would be up to them to decide whether to return to the United States for college.

“I know if they do finish school back home, then I can take them anywhere,” he said. “I could drop them off in the middle of the desert and they’ll survive. They’ll know who they are, they’ll work their way through life, they’ll be OK.”

Imakaev and his family are all US citizens, and he says he feels comfortable sending his wife and children there, though he is not certain it is safe to return himself. He and his family were granted refugee status by the US government after his father and brother disappeared following their detention by Moscow-backed forces as Russia regained control over Chechnya in the early 2000s.

In the meantime, he and his wife speak Chechen at home with their children, whom he also enlists to help with the backyard garden, where he has coopted a small strip of public land to grow garlic, broccoli, parsley and dill.

On a small patch of soil in his own backyard, the rare Medlar tree growing next to the raspberries bushes is a small reminder of his missing family, Imakaev says.

“Right before my brother disappeared, my father and I planted two of these in my backyard,” he said.

Imakaev said he is grateful to the United States for giving refuge to his family, though he had originally hoped to emigrate to Europe, where uncles of his were living and where tens of thousands of ethnic Chechens received asylum following the two wars.

But the human rights organisation that helped get his family out of Chechnya brought him to Boston, he said. “We didn’t really have a choice,” he said.

Inside his house on Saturday, chunks of beef were boiling in a pot on the stove while onions, red bell peppers and potatoes soaked in a large pink plastic bowl on the kitchen table.

Imakaev wore brown pants and a white t-shirt with the word “warrior” emblazoned in gothic script on the back, revealing arms clearly acquainted with the slightly rusting bench press equipment that is the centrepiece of his backyard.

As he sipped a cup of black tea, his young daughters watched American cartoons and bounded around the house.

“I work, everybody works. The kids go to school. And after the day is over, all we got is a couple hours of time to teach them your culture, your values,” he said. “That doesn’t work, because the system spends 18 hours with them, you spend two hours a day. So what’s the result?”