Increasing Russia’s involvement in the Asia-Pacific 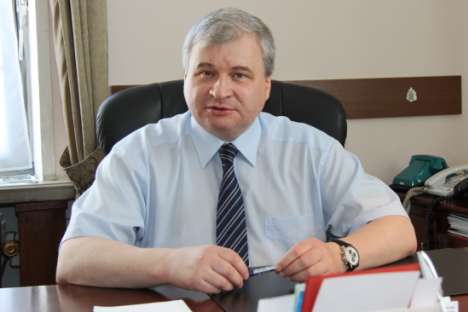 Seasoned diplomat and Russia’s new ambassador to China Andrey Denisov talks to RIR about Moscow’s development of friendly relations with Asian countries and the scope for BRICS.

The new Russian foreign policy concept sets a diplomatic course towards strengthening the country's positions in the Asia-Pacific region, including through the development of friendly relations with India and China. In Beijing, this mission will be carried out by newly appointed Russian ambassador Andrey Denisov, former senior deputy foreign minister, an experienced diplomat and orientalist.

Prior to his departure for China, Denisov gave an exclusive interview to RIR. Here are some excerpts.

What is Russia's view of the integration processes in Asia-Pacific, which is turning into a global competition arena?

All the key international players are getting increasingly interested in Asia-Pacific, which has established itself as the primary driver of global development. The USA has announced a “strategic return” to that region and the EU is also showing a keen interest. Some nations strengthen their historic allied relations with Asian partners, while others seek to increase their economic and political involvement in the region. It is of principal importance for cooperation, trust, and mutual understanding to prevail over competition and confrontation in Asia-Pacific. This is our strategic approach to that region, in which Russia, being both an Asian power and a Pacific power, has always had and always will have profound political and economic interests.

Russia has never left the Asia-Pacific, and today it is prepared to increase its involvement in the political and economic integration processes of the region.

We hope for our partners' favourable reaction to Russia's growing involvement in the Asia-Pacific affairs. Without Russia is would be impossible to ensure a military-political balance, coordinate collective efforts in countering international terrorism, develop cooperation in disaster response efforts, and promote dialogue among civilisations. Russia contributes significantly to addressing the energy, transport, academic, technological and environmental problems of Asia-Pacific.

Russia's accession to the WTO provided us with an opportunity for greater involvement in the processes of trade liberalisation and economic integration in Asia-Pacific. We are interested in the ideas to set up a common Asia-Pacific free trade zone, a trans-Pacific partnership and a comprehensive regional economic partnership. We are convinced that the implementation of these ideas should be based of equality and due regard for the needs of each country's economy. Only then will it be possible to avoid the emergence of exclusive trade blocs and "alienation lines".

In our practical work we naturally give priority to our national socio-economic goals, with due regard for our obligations within the evolving Eurasian Economic Community of Russia, Belarus and Kazakhstan. In this context we attach special importance to the pilot project to draft a free trade agreement with New Zealand; we also look at the possibility of concluding similar agreements with other partners, first of all with Vietnam.

Is the Asia-Pacific environment suitable for the establishment of the equal and indivisible security principle, which appears to be having difficulty taking root in the Euro-Atlantic region?

Russia's approach to the security architecture of Asia-Pacific is well known: it implies the necessity to jointly seek a balance of interests which would open up the way to the forming of a predictable and stable order in the region. Our partners react positively to this approach. We are working jointly with China and Brunei in the Asia Cooperation Dialogue format to develop a framework declaration that would confirm the Asia-Pacific countries' common adherence to the principles of peaceful resolution of disputes, non-use of force, renunciation of confrontation, and the establishment of partner ties between multilateral alliances in Asia-Pacific. It is extremely important to enshrine in the declaration the principle of indivisibility of security. This is the foundation that could allow us to proceed to taking practical measures for the sake of strengthening mutual trust and resolving regional problems.

What tasks does the concept of Russia's participation in BRICS set before its embassies in the other member countries?

First of all, the concept instructs us to strengthening the commonality of strategic interests that has evolved among the BRICS partners in the areas of politics, finance and economics. We and our partners stand for a reform of the international financial and economic architecture with due regard for the global economic reality of the 21st century; for the principle of supremacy of international law; and for the central role of the UN in maintaining universal peace and security. Hence the specific tasks for our diplomatic missions in the BRICS countries: to facilitate dialogue with our partners across the entire spectrum of BRICS activities and to generate new proposals. Initiatives in the field of multilateral investment cooperation are in special demand today. Direct communication channels have been set up at all levels within the BRICS framework, from the heads of states to the coordinators of individual working groups.

How true to life are the fears of China's economic expansion to Russian territory, which are voiced periodically in Russia's Siberia and Far East?

Contributions from all foreign partners towards our effort to develop Russia's Siberian and Far Eastern territories are equally welcome, but we must not forget that China is our closest neighbour, it is the world's second largest economy which is growing at a rapid pace. As President Putin appositely put it, we should “catch the Chinese wind in Russia's economic sails.” It is to this end that Russia has adopted the 2009-2018 programme to develop cooperation between its Far Eastern and East Siberian regions and China's northeast regions. Our current objectives are to increase the effectiveness of that programme, improve the quality of cooperation and search for new cooperation formats.

Over the past decade Russia has failed to rectify the structural imbalance in its trade with China...

Over these years, China has turned into our primary trade partner, and the volume of mutual trade has grown almost eight-fold to just below $90 billion. As for the structure of Russian exports to China, and of Chinese exports to Russia, in reflects the general structure of either country's foreign trade. Naturally, we are not happy with this situation and are seeking ways to improve the structure of mutual trade, first of all through increasing the volume of investment and developing cooperation in hi-tech spheres such as civil aviation, space exploration and nuclear physics.

Does the signing of major agreements in the field of military-technical cooperation during Chinese President Xi Jinping's recent visit to Moscow indicate that competition between Russia and China in the global arms market is a thing of the past?

I have no information about any such agreements. However, military-technical cooperation in undoubtedly an important area of bilateral cooperation. The advances made in this field testify to the special, trust-based, nature of Russian-Chinese partnership. Incidentally, they also facilitate improvements in the structure of our mutual trade. I will stress that our interaction in the field of military-technical cooperation is not aimed against third countries and is being conducted in accordance with the international rules of appropriate transparency. We pay a great deal of attention to protecting the intellectual property rights, and our Chinese partners understand our position. As for competition on third-country markets, we have no doubts about the high competitiveness of our national defence industry.