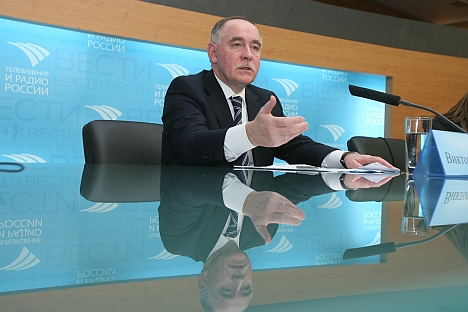 Viktor Ivanov, the head of Russia's Federal Drug Control Service talks about how the country intends to fight drug trafficking from Central Asia with the help of a new corporation.

It was reported last week that a special government commission had approved a proposal by the Federal Drug Control Service (FDCS) to establish a Russian-led “corporation of cooperation" with the countries of Central Asia. The purpose is to create jobs so as to distract the region's population from getting involved in the drugs trade from Afghanistan. The first phase of the initiative will cost 2 billion roubles ($64 million).

The head of the FDCS, Viktor Ivanov, spoke about the number of Russian lives that could be saved as a result.

The corporation will seek to focus on the construction of hydropower plants in Central Asia, the poultry industry, and hi-tech industrial assembly. How should the corporation be structured?

I propose that it should take the form of an open joint-stock company. 51 percent of the shares will be held by the state, while the remaining 49 percent will belong to private companies. By investing money in the corporation and becoming part of it, these companies will receive political, economic, and financial support from the government to invest in cost-effective projects in Central Asia.

Are hydropower projects in the region really cost effective? There are some very serious risks.

I've talked to the heads of some major Russian companies. They are all unanimous: if the government were to back us in the form of an organised corporation, we would feel inordinately more secure.

By how much will Russia's mortality rate from drugs fall if the corporation swings into action?

The figure among young people presently exceeds 100,000 a year. Five years of concentrated effort could see the figure drop by 25 percent, i.e. 25-30,000 lives.

How many jobs in Central Asia are due to be created through the corporation?

About 30,000 could be created in the first year of the programme alone.

Why invest public money in creating jobs in other countries instead of, for example, spending it on tackling drug traffickers in Russia?

Experience shows that policing by itself does not produce results. We need a comprehensive approach. Russian police tactics have traditionally favoured punitive measures. There is nowhere left to go in that direction. Last year alone, we arraigned 300,000 people for crimes and offenses related to drug trafficking, mostly youngsters.

So why not create jobs for them?

Other government departments are dealing with that. Job creation, especially for the young, is a key task. After all, those who traffic and consume drugs do not work.

Maybe we can spend this money on them?

Economic plans already exist to that effect, but getting results is a different ball game. We have development programmes, for example, aimed at the Far East and the North Caucasus. But no projects currently exist for Central Asia. What's more, there are very many people who migrate to Russia due to the lack of local employment. If we don't go to Central Asia, it will come to us — it already has, in fact. According to the Federal Migration Service, there are more than 12 million guest workers in Russia. That creates a very favourable environment for drug dealers, especially those who move and sell drugs from Afghanistan.

So why not use the money to beef up border security?

We have long said that border posts need to use gamma-ray equipment to inspect vehicles and detect drugs inside them. Regrettably, Russian industry no longer produces such equipment. It is made in Germany, the U.S., and China. But it is a very effective method.

Maybe the money should be put into buying such devices?

Yes, they need to be purchased.

Instead of the corporation...

2 billion roubles is, of course, a lot of money. But when $4.8 billion is allocated to help Cyprus, the question arises: should this money have been used instead to fund the fight against drugs? We would station these devices along our entire border. So it's all relative.

Abridged version. Original was first published in Russian in Kommersant.