Moscow's view on the non-proliferation of nuclear weapons 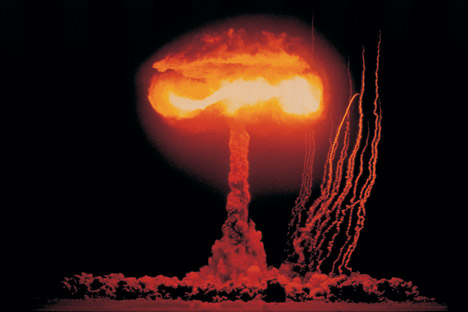 One of the most serious issues on the agenda of the NPT review process is the creation of the nuclear weapons free zone in the Middle East. Source: Getty Images / Fotobank

Russia views strengthening the NPT regime as a crucial task, and considers it, unquestionably, a foreign policy priority.

The preparatory committee for the 2015 NPT review conference took place in Geneva on April 22-May 3.

Russia views strengthening the NPT regime as a crucial task, and considers it, unquestionably, a foreign policy priority. We believe that the treaty’s realisation and consolidation serves the interests of all states.

Before the conference, the five NPT nuclear-weapons states met in Geneva on April 18-19, under the Russian Federation’s chairmanship. They reviewed the progress made towards fulfilling the commitments made at the 2010 NPT review conference, and continued discussions on issues related to all three pillars of the NPT: non-proliferation, the peaceful use of nuclear energy, and disarmament. The participants issued a joint statement which was submitted as a preparation committee document at the NPT review conference.

Establishing nuclear weapons free zones is a substantial tool to upgrade the regional and international security and strengthen the nuclear non-proliferation regime. Expanding the geographical scope of these zones is important in the context of addressing the problem of providing legally-binding security guarantees for non-nuclear states.

All the challenges to nuclear non-proliferation that we currently face should and must be addressed on the basis of the NPT and its unshakeable provisions, with strong adherence to the norms of international law while also taking into account the legal, security, and development interests of all states.

We should strive to establish the architecture of international cooperation on the peaceful use of nuclear energy. This would lower the risk of sensitive technologies being used, while also ensuring the strict observance of the rights of states that uphold their non-proliferation commitments to satisfy their lawful energy needs using nuclear energy. It is important not only for states to keep their non-proliferation promises, but also to ensure that nuclear materials do not get into the hands of malevolent non-state actors, chiefly terrorists.

Russia consistently advocates the development of the peaceful use of the nuclear energy and strong adherence to NPT commitments on not converting existing nuclear materials into nuclear weapons. This can be done by building a modern, proliferation-proof structure of international cooperation in the civilian use of nuclear energy.

Russia and the United States are working to implement the START treaty.  It is based on the principle of equal and indivisible security. We believe that this approach should be at the core of all international agreements in the sphere of disarmament and arms control.