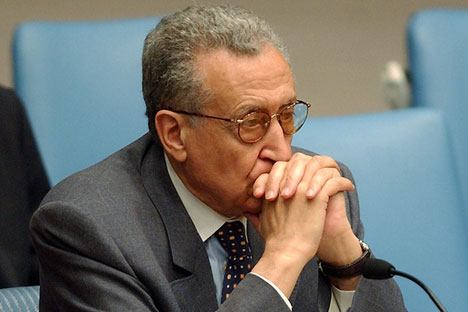 Lakhdar Brahimi praised the agreement between Russia and the United States to convene international talks on Syria that will involve both representatives of the Syrian government and opposition.

The UN and Arab League's special envoy to Syria, Lakhdar Brahimi, “warmly welcomed” on Wednesday an agreement between Russia and the United States to convene international talks on Syria that will include both representatives of the Syrian government and opposition.

The conference, expected to be arranged by the end of this month, will be aimed at facilitating a solution to the Syrian crisis through political dialog, US Secretary of State John Kerry said at a meeting with Russian Foreign Minister Sergei Lavrov in Moscow on Tuesday.

“The statements made in Moscow constitute a very significant first step forward,” a statement from Brahimi's office said.

The Syrian government has assured Russia it is ready to participate in the conference, Lavrov said. “But, of course, so far these are just words that have yet to be transformed into actions.”

The Syrian opposition has not commented on the proposal, Lavrov said. Opponents of Syrian President Bashar al-Assad have refused to sit down for talks with the regime in the past, saying that Assad’s removal is a non-negotiable issue.

The conference would be a follow-up to last year’s international meeting in Geneva that drafted a peace roadmap for Syria, Lavrov said.

The resolution passed in Geneva by the UN Action Group on Syria, which includes Syria’s neighbours and permanent members of UN Security Council, proposed to start with the creation of a transitional government comprising representatives of the opposition and Assad’s regime.

Both Kerry and Lavrov stressed that Russia and the United States support the Geneva roadmap and see political dialog as the only solution for Syria. The alternative is increasing violence, a humanitarian crisis and the country’s disintegration, Kerry said.

Moscow and Washington have come to loggerheads over Syria in the past, with the US putting the responsibility for the civil war on Assad’s regime and Russia insisting that the blame should be shared by rebel forces. Russia has blocked several UN Security Council resolutions on Syria, saying they were biased in favour of the rebels.

The United States has supported the Syrian rebels, providing them with non-lethal military equipment.

A bill was also recently filed with the US Senate proposing the supply of weapons to Syrian insurgents. Kerry said the bill’s fate depended on the ongoing US inquiry into reports that the rebels have used chemical weapons, but added the matter may become a moot point if the government and the opposition begin a dialogue.

More than 70,000 people have died in the two-year-long ongoing conflict in Syria, according to the latest UN estimates.