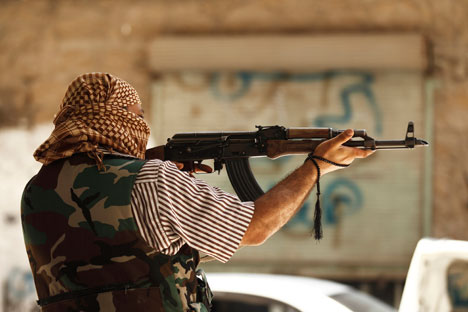 Syria is a case in which death and destruction continue to take place despite efforts by international players and international bodies. Source: Reuters

Though acts of violence in the country are committed by both the government forces as well as rebels, the barbarity on the parts of the rebels has defied all human notion of civility, even in conflict.

While Russia and the US are preparing for a conference on Syria early next month, perhaps under the auspices of the United Nations, the gruesome incident of a rebel commander eating a vital body part of a dead soldier is a sordid tale about the Syrian crisis. The atrocities committed by rebels have surpassed human imagination of cruelty. Though acts of violence are committed by both the government forces as well as rebels, the barbarity on the parts of the rebels has defied all human notion of civility, even in conflict, and has sent the players who seek peaceful resolution of the conflict into tizzy.

The British Prime Minister, David Cameron during his recent meeting with the US President, Barack Obama expressed the option of supporting the rebels with arms. The US has so far remained cautious and non-committal. Obama during his Middle East tour in March expressed concern over Syria turning into an “enclave of extremism.” Perhaps the most positive development from peace perspective is agreement between Russia and the US to conduct a conference, where the Syrian government and the rebels will take part. Kerry during his visit to Sweden, after his talks with his Russian counterpart, Sergei Lavrov, expressed optimism about the conference and stated, “I keep hearing some people suggest somehow that the process is moving away, not closer. I just don’t agree with that – enormous plans are being laid.” The UN and Arab League mediator, Lakhdar Brahimi has called the Russia-US agreement on conference a positive step for peace in Syria, and started working on logistics and other related issues of the conference.

In the Syrian case, one can only hope that something positive such as announcement of ceasefire by the government and the rebels comes out in the conference. As the gory incidents indicated, unless ceasefire is achieved such incidents will like to grow further. The eater of the lungs of the dead soldier was not a stray rebel but a commander of rebel faction Omar al-Farouq Brigade. The commander is named Khaled al-Hamad, nicknamed, Abu Sakkar. He is based in Baba Amr in Homs. The video reportedly taken in March has gone viral in internet sites in the last few days. Besides the heart wrenching act in which Sakkar rips apart dead soldiers chest and brings out heart and lungs and bites the lungs while speaking defamatory words against the Assad forces. While chanting the name of God in a perverse pleasure or sense of accomplishment, the rebel commander declared “I swear to God we will eat your hearts, Alawite soldiers of Bashar the dog.” There are similar barbaric acts such as roasting the head of a pilot, belonging to Assad forces or sawing another soldier. Human Rights Watch, a prominent human rights watchdog has condemned the barbaric act. The Syrian National Council has attempted to distance it from this rebel act by terming it a stray incident and calling for action against the commander. But, the real concern at this stage which is clearly evident is that the rebel movement is rudderless, and some of the rebel commanders steeped deep in the ideology of extremism and barbarism and can go to any inhuman extent to realize their objectives.

Hence, it is urgent to get acts together to diffuse the crisis and weaken the violent extremists, while at the same time exploring options for a political transition in Syria. The forthcoming conference will be a great venue to give shape to such a transition process. As reports suggest, both the Assad regime and the Syrian Opposition Council have expressed willingness to take part in the conference. Assad has already sent the list of his representatives for the conference. Though initially his information minister asked for detail information and agenda of the conference and expressed hesitation to participate without the details, the recent development is that Assad regime will participate in the conference. One of the opposition leaders stated that they will consult with their allies particularly Turkey, Saudi Arabia and Qatar before taking part in the conference. The meeting between Assad representatives and the Opposition will be the first of its kind since the eruption of violence two years ago. Coordination between Russia and the US towards developing a peace plan will be definitely helpful in salvaging the crisis by bringing both the violent parties to the dialogue table.

Syria is a case in which death and destruction continue to take place despite efforts by international players and international bodies. Any procrastination in evolving a common peace plan will prove catastrophic. More than 70,000 people, both Sunnis and Shias, have lost their lives. Recent weeks have also shown the proclivity of Syria turning into a regional or international battle field. Syria sits on a sectarian fault line and surrounded by neighbours who have different goals and agendas about the ongoing conflict. It is time that international players, including Russia and the US, address comprehensively the disaster that is Syria. The barbaric act of the rebel commander not only indicates the direction to where the war is going, but in a sense a frantic wake-up call that the international players give peace than differences the priority.  Syrian sectarian bomb is ticking, and the conference holds potential to defuse it provided the conference holders direct their energy to the diffusion of the crisis which day by day turning gorier.