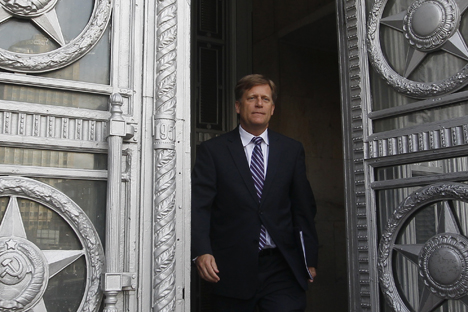 Russia lodged an official protest with US Ambassador Michael McFaul (photo) on May 15, after FSB reported that a US diplomat suspected of trying to recruit a Russian security services agent. Source: Reuters

The Cold War era is long gone, but it might be useful to architects of bilateral relations to keep in mind key priorities and not to let the excesses, such as the latest spy scandal, wreck their strategic plans.

Catching spies is not a rare event in Russia-U.S. relations. In October 2012, the Russian Foreign Ministry had to comment on the detention of 13 U.S. citizens and natives of the former USSR on charges of exports of military technologies to Russia. You might say it is "a solid tradition," established by secret services of the two countries in the Cold War era.

In this light, the exposure of Ryan Christopher Fogle, third secretary of the U.S. Embassy in Moscow -- who set out with the mission to convert a Russian secret service employee overnight to May 14, and carried an odd package containing a compass and a set of wigs -- would seem like a sort of spying routine.

A majority of Russian mass media outlets focused on the scandal for largely emotional reasons, while the counterintelligence service's report on catching a spy was undoubtedly a detail of Russia's public and political background rather than bilateral relations with the USA. Incidentally, the detentions in America in 2012 fitted quite well into the political context of U.S. presidential election campaign.

The latest scandal is unlikely to affect Russian-American relations. The Russian Foreign Ministry expressed a protest to U.S. Ambassador to Russia Michael McFaul. The Embassy acknowledged the fact of detention of its employee, but no comments from McFaul followed. Russian Foreign Minister Sergei Lavrov, who met with U.S. Secretary of State John Kerry said the spy scandal had not been discussed. The parties had already exchanged the statements about their readiness to continue cooperation, including in such a difficult issue as preparation of an international conference on Syria.

Alleged US spy arrested in Moscow

It had been passed a month ago and contained proposals on missile defense systems, further cuts in nuclear arsenals and creating a permanent secure direct video link between the two presidents.

A discussion of even part of these proposals - not mentioning their implementation - would imply considerable progress in Russia-U.S. relations which are going through not the best of times.

However, a sort of historical pattern seems to immediately take effect as soon as there emerges a certain freedom of maneuver in Russia-US relations for turning them to more or less friendly rhetoric towards each other, if not actual warming. This pattern reduces the chances to take advantage of this "window of opportunity' to the minimum.

The Boston bombings on April 15, when Obama's National Security Advisor Tom Donilon passed to the Russian president a letter from the White House, opened the opportunity for political rapprochement and practical police cooperation.

Exactly a month later, the detention of a spy in Moscow hampered, at the very least, the use of these new opportunities. You might recall political bestsellers of the Cold war era, where "the sharks" of the defense sector and "hawks" with shoulder-straps in Washington and Moscow were ready to do everything to foil the efforts by their peace-loving leaders striving for detente.

The Cold War era - or the time of relative Soviet-U.S. parity - has long gone, but it might be useful to the architects of bilateral relations in Moscow and Washington to keep in mind the key priorities and not to let the excesses, such as the latest spy scandal, wreck their strategic plans.

In this sense, the comment by Putin's aide Yuri Ushakov seems optimistic. Of course, he is surprised by the CIA's "clumsy" work against the background of the intention, announced by the presidents of the two countries, to step up cooperation, including cooperation between secret services. He remains confident that the incident "cannot significantly affect cooperation or complicate the talks between Putin and Obama in June and September."