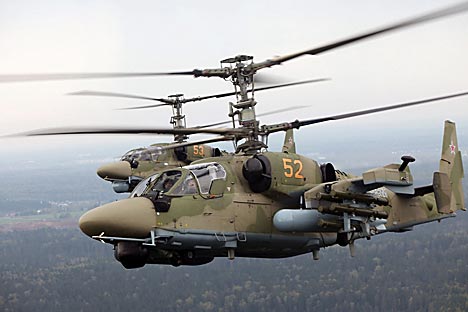 As a NATO member, Turkey depends on the supplies of American and European weapons. Moscow has repeatedly tried to get a piece of the action and fascinate the Turkish military with its advanced technology.

The first attempt was made at a mid-1990s tender to supply 145 attack helicopters worth $5 billion, when Moscow offered its latest knowhow – the Ka-50 Black Shark attack helicopter. The Shark was even renamed Erdogan – the surname of the then Prime Minister, which means "hawk" in Turkish – to suit the Turkish taste for the sake of winning the bid.

Russia had to compete against the American Bell helicopter in the tender. While Washington’s offering was weaker on every count, experts claim the Americans exerted a great deal of pressure on Ankara. The tender was canceled as a result.

Russia made its second attempt to break into the Turkish market in 2009. Rosoboronexport then managed to defeat the Israeli state-owned company Rafael and America’s Raytheon in a tender to supply the Turkish military with 80 medium-range anti-tank missile systems complete with 800 missiles.

The type of anti-tank missile systems that took part in the tender wasn’t disclosed, but experts have established that Russia’s PTRK Konkurs-M met the tender’s specifications.

According to experts, the Konkurs beat out Israel’s MAPATS and Nimrod, and the American TOW2A, TOW2B and Hellfire thanks to its attractive price and its combat characteristics. Russian anti-tank systems are more effective than those of their rivals in a number of ways, such as operational range and firepower.

For example, the missiles can easily pierce the outer, dynamic protection layer of all types of modern armored vehicles before burning through more than half a meter of armor itself. The systems can fire at helicopters too.

The Konkurs can be mounted on an armored vehicle or car, and it can be used as a portable launcher. If the enemy blinds the missile’s optical guiding head, the operator can switch to manual targeting and still hit the target.

As it has done in the past, Moscow was banking on its most advanced technology at the IDEF 2013 exhibition. Russia once again presented its Ka-50-based Ka-52 Alligator attack helicopter and the Mi-28NE Night Hunter. Such persistence can be explained by the fact that Turkey badly needs attack helicopters.

Ankara tried to fill its need with the help of Washington, but the United States turned down their request for the AH-1W Super Cobra helicopters, citing a lack of additional manufacturing capacity. Russia’s position in this case looks stronger: The Ka-52 and the Mi-28NE have been commissioned by the Russian Army and are manufactured serially.

So Moscow, free of any economic or political considerations, can start supplying them at any time.

The proposal to start joint development of a surface-to-air missile system with Ankara was perhaps the most intriguing development of IDEF 2013. The SAM would be based on the Russian S-300V Antey-2500 system.

This tracked vehicle can operate in the front ranks of advancing or retreating troops – unlike the S-300 PMU2, which Moscow supplied to Greece and which is only designed to protect stationary facilities.

In addition to the Antey, Moscow has offered the Buk-M2E and the Tor-M2E surface-to-air missile system, and the Pantsir-S1 combined missile and artillery system – also fully mobile and designed to protect advanced positions.

The Pantsir is the most interesting and promising system of all the machines exhibited at IDES 2013. It features a modular structure. As a combat unit with a radar and anti-aircraft missiles, it can be mounted on a wheeled or tracked chassis, on a vessel, or used as a stationary system.

It comprises two 30-milimeter automatic guns accompanied by two sets of six hypersonic SAMs. The horizontal range is 12 kilometers and the vertical range is upward of five meters. The missiles are special in that they do not require pre-firing preparation and can be fired while in motion. Turkey’s closest neighbors – Syria, Iraq, Iran and the UAE – have already commissioned the Pantsir.

What’s new for the Navy?

Navy equipment was presented at a separate portion of the Russian exposition. The Murena-E hoverborne landing craft, which could become an effective component of landing docking ships, was presented.

The craft is designed to take landing troops and material to and from equipped and non-equipped shores. Potential international customers were also shown the Gepard-3.9 frigate and the Mangust Project 12150 patrol speedboat. A Russian hoverborne guided missile corvette Bora paid an unofficial support visit to Istanbul from Sevastopol.

The head of the Russian delegation, deputy CEO of Rosoboronexport, Anatoly Aksyonov, explained Russia’s massive presence at IDEF 2013 by the fact that Turkey was the first NATO member country to build close military and technical ties with Moscow.

While military and technical cooperation between Moscow and Ankara is under 1 percent of Rosoboronexport’s turnover, there is room for expansion.

Turkey’s problems obtaining the necessary weapons and material from its NATO partners also point in this direction, as does the constantly expanding military cooperation between Moscow and Ankara, one of the areas of which is jointly patrolled in the Mediterranean by the Russian and Turkish Navies to prevent arms and material smuggling as part of NATO’s Operation Active Endeavor.