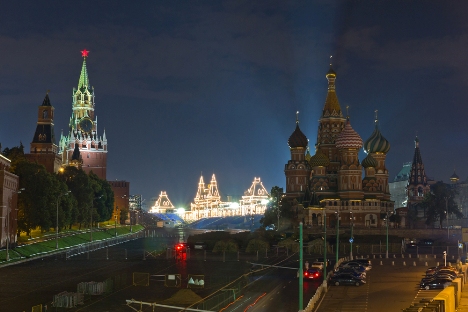 The country’s image is gradually starting to conflate with that of the collapsed Soviet state. Source: Igor Stepanov

A poll commissioned by the BBC in 25 countries revealed that Russia’s reputation in the world is continuously falling.

Last week, two seemingly unconnected events made me think once again about the way Russia (at least the official one) thinks about itself and the reason this self-perception is not shared by the world at large. First, Foreign Minister Sergei Lavrov expressed indignation at the perceived theft of pro-Russian votes during the Eurovision pop song contest. Then a poll commissioned by the BBC in 25 countries revealed that Russia’s reputation in the world is continuously falling. It now finds itself in the company of Iran, Pakistan, North Korea and the eternally and unjustly vilified Israel as one of the most disliked and mistrusted states in the world.

As is evident from the poll findings, Russia is more or less liked in China, Chile and Ghana, of all places. The Chinese seem to be getting used to their newly acquired status as a (nearly) global power. Their view of their northern neighbor is mellowing as the scale of comparison of the two countries’ economic and military might increasingly tilts toward Beijing. In Chile (as in many other Latin American countries) Russia is still seen as an inheritor of the Soviet Union’s anti-US mantle. As for Ghana, I am baffled. My guess is that the Ghanaians are so benevolently inclined toward Russia because they hardly know anything about it – as the Russians do about Ghana.

The most well regarded country in the world turned out to be none other than Germany, Russia’s World War II foe.

These findings seem to be a tough indictment of Kremlin policy and Russia’s lack of soft power, despite hefty investment in projects like Russky Mir (Russian World) – an attempt to create something resembling the British Council or Alliance Francaise to promote the country’s image abroad. All these efforts seem to have come to nothing, and there are several reasons for this.

Firstly, Russia’s soft power isn’t really very soft. Its cultural centers abroad (and I have been to a few) frequently convey a whiff of Soviet-inspired imperial nostalgia and condescension, especially in the former Soviet republics or ex-Warsaw Pact satellites.

Secondly, the “back to the USSR” trend now evident in Russia’s domestic policy doesn’t seem attractive to the world at large. The country’s image is gradually starting to conflate with that of the collapsed Soviet state – hardly a positive development.

Thirdly, Moscow is not very good at “selling” its present day achievements. The only one I can think of is the international success of St. Petersburg’s Mariinsky Theater, headed by conductor Valery Gergiev. Russian opera stars, footballers and scientists almost uniformly prefer to work and live outside of Russia. Fourthly, the Kremlin’s foreign policy is so geared up toward defending not so much the national interests but those of its ruling class (as is the case, for example, with the so-called Magnitsky case) that this breeds mistrust almost at a knee-jerk level.

Finally, Russia’s uncertainty about its post-Soviet identity translates into aggressive defensiveness of a kind that was displayed with the Eurovision voting skirmish. When Russia wins, it is because it is great. When it loses, it could not possibly be because others were better, but only because someone conspired to undermine its greatness.

If one spends all the time complaining about others and nursing perceived wounds, one should not be too surprised when others take notice and draw inevitably negative conclusions. It’s time for the Russians – both officials and ordinary people – to stop behaving this way, and then they will discover that the world is a much brighter place than they think it is today.