Russia, US at odds after EU move on Syria 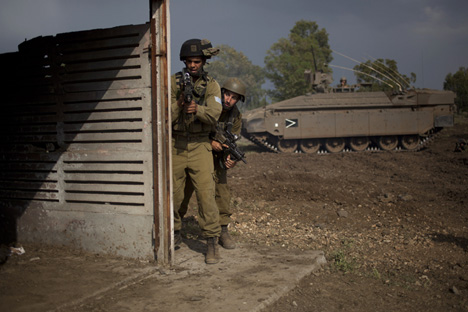 The EU decision opens the door for individual European countries to send weapons to Syrian opposition forces and reiterated its opposition to Russian plans to deliver sophisticated arms to the Syrian government. Source: AP

Moscow and Washington split starkly over an EU move to end its ban on arms sales to Syria, with Russia denouncing it as a violation of international law and the US applauding the move while repeating its aversion to Russian weapons sales.

“We welcome the EU action,” White House spokesman Jay Carney said a day after top European Union officials confirmed the bloc would not renew its prohibition on weapons sales to rebel groups in Syria, instead saying individual EU member states could now decide this question for themselves.

“Support for the opposition is a track that we are pursuing,” Carney told reporters accompanying President Barack Obama to New Jersey.

His comments came hours after Russian Foreign Minister Sergei Lavrov strongly attacked the EU decision, describing it as illegitimate and a violation of international law.

“Discussing at an official level whether or not to supply arms to non-state subjects is in conflict with all norms of international law, including the principles of non-interference in states’ internal affairs, not to mention military intervention,” Lavrov said in Paris.

Another top Russian diplomat, Deputy Foreign Minister Sergei Ryabkov, struck a similar note and directly linked the EU decision to plans being orchestrated by the United States and Russia to convene an international conference with the aim of ending the two-year conflict in Syria.

“This is a reflection of double standards and a direct blow to the international conference on Syria proposed by Russian Foreign Minister Sergei Lavrov and US Secretary of State John Kerry on May 7,” Ryabkov said.

The Russia-US plans to convene the conference was announced with some fanfare earlier this month after talks between Kerry and Lavrov. Recent developments have cast a cloud over the plan.

A US news website meanwhile reported that the White House had asked the Pentagon to draft plans for a no-fly zone over Syria.

“The White House is still in contemplation mode but the planning is moving forward and it’s more advanced than it’s ever been,” The Daily Beast quoted one unnamed administration official as saying.

As the United States expressed its hearty backing for the EU decision which opens the door for individual European countries to send weapons to Syrian opposition forces, it also reiterated its opposition to Russian plans to deliver sophisticated arms to the Syrian government.

“We’ve made clear in the past and made clear again our firm belief that providing arms to the Assad regime does not bring us closer to the political transition that Syria deserves,” Carney said.

State Department spokesman Patrick Ventrell echoed his comments, and added: “We condemn the continued supply of Russian weapons to the (Syrian) regime.”

Russia has said that it is honouring an agreement concluded before the outbreak of fighting in Syria to supply Damascus with S-300 anti-air missile defence systems. Moscow has recently stated that the delivery will go ahead despite the conflict, a decision strongly opposed by Israel in particular.

Israeli Defence Minister Moshe Yaalon said his country regarded the Russian weapons as a security threat and implied that Israel would retaliate in Syria should the Russian arms reach the war-torn country.

"The shipments haven’t set out yet and I hope they won’t,” Israeli media quoted Yaalon as saying. “If they do arrive in Syria, God forbid, we’ll know what to do.”

In confirming that the EU arms embargo would not be renewed, EU foreign policy chief Catherine Ashton said that any arms sent to Syria would be "intended for the protection of civilians," and added that the EU governments would review the position on sanctions on Syria before August 1.

Syria’s ambassador to Russia, Riad Haddad, meanwhile said Tuesday in Moscow that the EU’s decision will make the situation there worse.

“Since the very start of the conflict the West has been secretly arming terrorist groups in Syria and now the Western countries are planning to do that openly,” he said.

The Obama administration has refused to send arms to the Syrian opposition but has shipped tens of millions of dollars in non-lethal aid to opposition groups.

Opponents of arming Syrian opposition rebels say they are not under any kind of unified command, that their ranks include fighters openly allied with al-Qaida and other radical Islamist movements and argue that once they enter Syria there is no way to keep any weapons out of the hands of Islamist radicals.

Ventrell, questioned repeatedly on the issue, shrugged off suggestions that US support for possible EU arms shipments to Syria and staunch opposition to Russia arms sales to Syria were not contradictory.

“When we’re talking about the opposition, that’s a different group and clearly people who are defending themselves in the face of an enormous onslaught and a despicable onslaught of violence against themselves.”