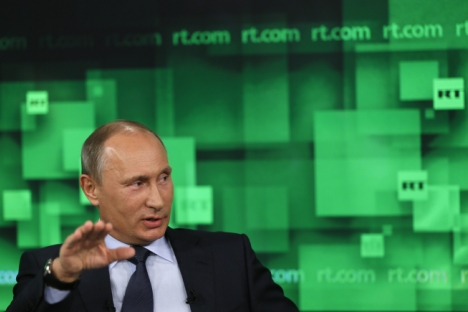 Europe’s problem is not the welfare state as such, but “inefficiency,” Putin said. Source: AP

The Russian president wants the voting system used at the IMF to determine policy should be changed to “enhance the role of developing countries,” with new weight given to the BRICS.

Russia will use its presidency of the G20 to push for a radical overhaul of the International Monetary Fund and changes to its voting system to give developing economies a stronger voice, President Vladimir Putin said in an interview with RIA Novosti.

“The IMF frequently fails to keep up with the rapidly changing situation in global finance – first and foremost, in making effective and timely decisions,” Putin said in answers to written questions, adding that the decisions’ “implementation leaves much to be desired as well.”

Russia currently holds the rotating presidency of the G20, a formal grouping of the world’s 20 most powerful economies, and will lead the G8, a group of the world’s eight richest countries, in 2014.

Putin did not call for the outright dissolution of the IMF, but argued that the organization must adjust to “current economic realities” and said it was time to consider the issue of its “overall reorganization.”

In particular, he said that the voting system used at the IMF to determine policy should be changed to “enhance the role of developing countries,” with new weight given to the so-called BRICS group of Brazil, Russia, India, China and South Africa.

The IMF has played a key role in international finance since it was set up in 1945.

As well as providing funding in emergencies – like the recent European sovereign debt crisis – it also provides expertise. Advice from the IMF was widely sought by Russian officials when the country was making its transition to a market economy in the 1990s.

Putin acknowledged that reforming the IMF would not be easy, but said Russia would attempt to negotiate some compromises and “mutually acceptable solutions” ahead of September’s G20 Summit in St. Petersburg.

The Russian president also mocked the European welfare model, saying it is losing control of the economy and allowing the rise of a “dependency mentality.”

Europe’s problem is not the welfare state as such, but “inefficiency,” Putin said in answers to written questions.

While a modern state must honour its obligation “to take care of its population and ensure its social protection” or face the risk of collapse, European countries have been “living beyond their means” and are now “witnessing the rise of a dependency mentality … [that] endangers not only the economy but the moral foundation of society,” Putin said. “It is no secret that many citizens of less developed countries come to Europe specifically to live on social welfare.”

In contrast, Putin praised Russia’s low unemployment and real wage growth, saying that these, plus the growth of consumer spending and bank lending, are the basic factors stimulating the country’s economy.

“We made our choice long ago. We will not renounce our social obligations,” Putin said of the Russian state.

He did not address either the hidden fees that permeate nominally free services like healthcare and public education or the criticism levelled at his push for higher social spending, which some economists say is possible only as long as the country’s budget is propped up by high oil prices.