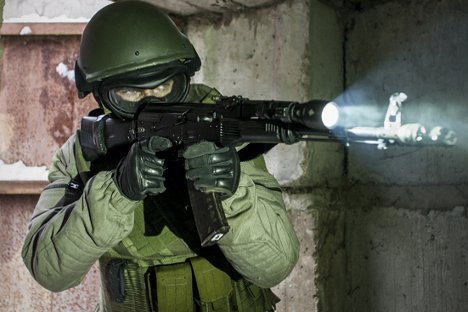 A joint effort between Russia and the United States will go a long way in countering the global menace of terrorism. Source: O.Balashova/Press Service of The Russian Ministry of Defence

As terrorism is a global problem, it is but imperative that all global powers and international bodies must take part in deliberation process to evolve a common framework.

As two major powers in the global scene, Russia and the US have stakes in a peaceful global order. This objective, when seen from a lens of bilateralism, has been subject to differing interpretations between the two powers. Understandably national interests significantly determine their foreign policies but it appears that both the countries have increasingly factored the connection between national interests and broad objective of global peace and stability in their foreign policy making and in their bilateral relations. And when one talks about peace and stability in the world, terrorism certainly emerges the major threats to these objectives. The joint statement issued by the leaders of both the countries, Vladimir Putin and Barack Obama last week in Lough Erne during the G8 summit provides testimony how the leaders of both the countries have expressed willingness to cooperate to fight terrorism.

Vladimir Putin since first being elected President of Russia in 2000 could trace the connections between terrorism in Russia’s North Caucasus and global terrorism. The White Paper on terrorism, published by the Russian government in 2000, identified a number of international terrorist organizations which had links with terrorists in Chechnya. It was after the 9/11, in which Russia fully threw its weight behind the US effort to fight international terrorism that the US perspective on terrorism in Russia’s regions changed. Putin was the first leader to offer help to his US counterpart and term terrorism as the ‘plague of 21st century.’ Though the Boston Marathon blasts in April this year was of far lesser magnitude in comparison to the 9/11, there remains a parallel between the two cases as Russia offered support in both the cases. The US government acknowledged the Russian help in its investigation on the Marathon case. Between these two incidents, spanning a period of about 12 years, many developments took place in bilateral relations including rising trust deficit between the two countries and fizzling out of Obama’s ‘reset’ policy initiated during his first term.

In this background, the joint statement issued at Lough Erne can be considered a game changer in the context of bilateral cooperation to combat terrorism. The statement aimed at salvaging much of distrust between the two countries and looked at the menace of terrorism afresh. A closer reading of the statement reflects the seriousness of both the countries to fight the menace. The statement reads, “terrorists do not acknowledge borders and seek to impose their extremist ideology of violence everywhere.” It may at first sight appear a truism or a given fact, but the important point that needs emphasis is that the acknowledgment by Russia and the US of the amorphous character of terrorism would help evolve a global framework to fight the menace as both the countries have significant clouts as members of the United Nations Security Council and many other important forums. Whether terrorist organizations in the Eurasian region or in other parts of the world, there are ample evidence how they are interlinked. The leaders also pointed out “We note with concern the cases in which terrorist groups have coalesced with transborder organized crime, in particular in the area of the illegal traffic in drugs and arms.”

A day in the life of an Interior Ministry Commando

The joint statement argued that “The terrorist threat calls for a concerted, comprehensive response that presupposes law enforcement measures for the protection of our citizens, as well as the implementation of a long-term strategy aimed at denying terrorists any social or material support, and working with societies to prevent the spread of the terrorist ideology.” The important point that needs to be noted in this context is that both the countries agreed to evolve a concerted and comprehensive response to the menace. In this process, they agreed to involve international organizations like the United Nations and its Security Council, and other multilateral organizations like Organization for Security and Cooperation in Europe (OSCE), Financial Action Task Force on Money Laundering (FATF), Global Counterterrorism Forum (GCTF), Russia-NATO Council, Asia-Pacific Economic Cooperation (APEC), and G-8.

As terrorism is a global problem, it is but imperative that all global powers and international bodies must take part in deliberation process to evolve a common framework. For this, it is but necessary to have trust between global players including Russia and the US.

Both countries declared their joint resolve on “preventing weapons of mass destruction from falling into the hands of terrorists, and halting the funding of terrorist activities, the recruitment and training of those who commit terrorist acts, and the actions of lone terrorists.” Falling of weapons of mass destruction, particularly the nuclear weapons, in the hands of terrorists and their possible use by them is a serious concern, which needs to be addressed earnestly. Weak states with these weapons are special targets of the terrorists. For instance, the nuclear weapons facilities in Pakistan have been attacked by terrorists on many occasions, though foiled by the Pakistani army.  About funding and training, besides money from drug trafficking and arms peddling, the terrorists also receive huge sums of money from various organizations and some radical countries to continue their activities. The Counterterrorism Working Group of the Bilateral Presidential Commission has been grappling with these issues.

Russian-American maneuvers to be held in Germany in summer - spokesman

Another major concern as expressed in the statement is “the terrorists’ use of contemporary information and communication technologies for staying in touch, collecting information, spreading their ideology, attracting new adherents and financial resources, planning, organizing, and carrying out terrorist acts.” The ubiquitous nature of information technology and its accessibility, and proliferation of networks including social networks have provided the terrorists cheap but effective means to spread their ideology and indoctrinate the uninitiated. It also helps electronic transfer of money from one corner of the world to another corner in seconds.  There are hundreds of examples to substantiate this point. The Mumbai terror attack of 2008 or the Boston Marathon attack in April this year or the terrorist acts in other parts in this globalized world have been swift and effective to challenge the might of a multiethnic and pluralistic state. The statement while condemning terrorism “resolutely in all its forms and manifestations,” particularly mentioned the Boston blasts and the explosion in Makhachkala in May 2013, which have “demonstrated anew that the global terrorist threat is not weakening,” and which call for “a buildup of our joint efforts in countering it.”

A joint effort between Russia and the United States will go a long way in countering the global menace of terrorism.