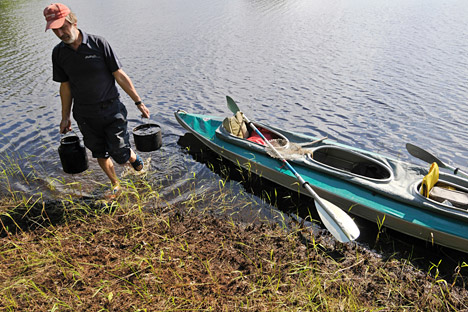 Experts believe that the strategic competition for water resources will continue to shape the dynamics of Asian security in the near future. Source: PhotoXPress

Regulating the use of water resources belonging to multiple states is one of the 21st Century’s greatest challenges but there are ways to reach common ground.

The Indian government is perturbed by Chinese economic activity on the Brahmaputra. It is the largest artery in northeastern India, and, according to China's 12th Five-Year Plan, Beijing intends to actively develop it. In particular, the Celestial Empire has plans to construct several hydroelectric power stations which, according to Delhi, threatens India's economic and environmental interests.

That is not the only example. There are plenty of similar conflicts all over the world, like in Central Asia, for example, where a series of disputes between republics arose from the manner of operation of hydroelectric plants. One such disagreement between Uzbekistan and Tajikistan resulted from the construction of the Rogun plant. In Africa, Ethiopia and Egypt cannot share the waters of the Nile, and Burkina Faso and Ghana share a similar problem with the Volta River.

In the Middle East, Ankara and Damascus have repeatedly quarreled over the construction of dams on the Euphrates.

Experts predict that in the near future, wars will be fought over water rather than energy. History has already witnessed such examples as the Six-Day War, among whose causes was Tel Aviv's newly gained access to a fresh water source.

How should the use of water resources belonging to multiple states be regulated in the 21st Century? This problem is particularly pressing where several states share rivers and groundwater connected to shared basins with their own ecosystems. From a legal point of view, finding a solution is not easy, but it is certainly possible.

According to Camil Bekyashev, arbitrator at the Permanent Court of Arbitration in the Hague, the most effective, peaceful way out of such complex disputes over water is the international court system. The regulations for the use of both still and flowing bodies of water are determined by the 1997 UN Convention on the Law of the Non-navigational Uses of International Watercourses, which provides the option of appealing to international arbitration in order to resolve disputes stemming from use of international watercourses.

“Practice in this field is quite controversial, yet rich at the same time. For example, in one case concerning a dispute over the Gabčíkovo-Nagymaros dam project with Hungary vs. Slovakia in the International Court of Justice in 1997, the court invoked the principle of fair use and held that although Slovakia had the right to unilateral control over a shared resource, it could not deprive Hungary of its right to fair and reasonable use of the Danube's natural resources. All of these disputes are very complex, and sometimes it takes several years to solve them. Possibly even 25-30,” says Bekyashev.

The Permanent Court of Arbitration in the Hague – an international arbitration court – has also had successful experiences with litigation. The most recent example was its adjudication of the dispute between India and Pakistan over the use of the Indus River's waters. In this case, Islamabad expressed its frustration with Delhi’s actions. Several years ago the Indian government began construction on the Kishanganga Hydroelectric Plant upstream of the Indus River, sparking criticism from Pakistani authorities, who are also building a plant farther downstream, which they fear will not have enough water. Islamabad insisted that allowing the Indian plant to draw its water upstream would be infeasible. As a result, in February of this year, the court issued a partial solution which ruled in Delhi's favour, but ordered the Indian government to maintain a minimum water level in the river. In closing the case, the court will determine the amount of water it must allow downstream by the end of the year.

Not long ago, the International Court of Justice heard another case, this time involving a dispute between Uruguay and Argentina over pulp mills on the Uruguay River. In 2010 the court handed down its decision in which it recognized certain violations on Montevideo's part for having authorized the construction of environmentally hazardous factories, but refused Argentina's request to dismantle one of the two Uruguayan companies and require compensation for its alleged damages.

There is a caveat, however. Despite the fact that the court hands down verdicts based on existing international treaties and conventions, as of today both the International Court of Justice and the Permanent Court of Arbitration may hear cases only with the consent of all concerned parties. Moreover, establishing a case in the international court is rather difficult in that each state must pursue its own interests.

Experts believe that the strategic competition for water resources will continue to shape the dynamics of Asian security in the near future. Security risks can be mitigated if Asia's leaders establish norms and institutions aimed at creating judicial cooperation. Unfortunately, little has been done in this regard to date. For example, 53 of Asia's 57 transnational river basins are not subject to treaties concerning ownership of watersheds or cooperation agreements.