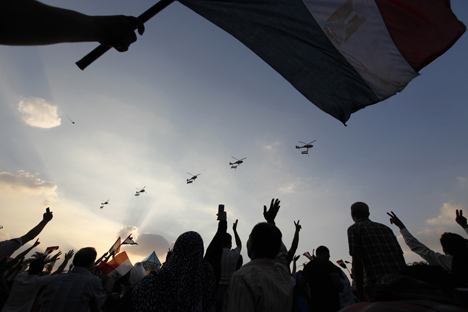 Pundits welcome army interference in the stand-off between Morsi and the opposition.

Against the background of the political showdown in Egypt and its President Mohamed Morsi’s resignation, RIR offers a selection of expert opinions from Russian observers on the future of the largest country in the Middle East.

Professor Marina Sapronova of the Moscow State Institute of International Relations (MGIMO) said in an interview with RIR that Egypt is in the midst of a transformation which cannot be swift, because there is no consensus in the society about which way to go.

The situation is further compounded by the fact that the whole region is in turmoil.

“The army is the only organized force that commands people’s trust,” she added. “It will take the political process into its hands and restore order. The army will act as guardian of the statehood before holding the elections and handing over power to civilians.”

“Morsi had only a small reservoir of trust from the beginning. Egypt faces a long period of political instability, but there will be no civil war. This is not Libya or Syria. People there do not have such quantities of arms.”

Sapronova is sure that foreigners who are planning holidays in Egypt have nothing to fear, since the most popular holiday resorts are far from the centers of political struggle and Egypt has a vital stake in preventing the unrest from affecting tourism.

The tourist industry employs one in every 10 Egyptians, and revenues from tourism are many times greater than returns on the operation of the Suez Canal.

“In the history of modern Egypt, beginning from 1952, the army has played a mighty and often a decisive role in all political crises,” he said in an interview with Vzglyad newspaper.

“The situation is once again out of kilter and hard to control. The army has, of course, declared that it is with the people and has always been with the people, so, for a while, it will act as the organizing element, but it will then take a step back. Egypt has many political forces that have acquired experience and a taste for political life,” he added.

As for Morsi’s resignation, Alexander Vavilov says that the former Egyptian leader “has failed to resolve the country’s problems, which are, if anything, getting worse.”

“When Morsi came to power a year ago, many observers said that the biggest time bomb beneath his regime was not politics but economic issues: feeding the people, providing them with electricity and petrol,” he said.

“A new leader is needed to inject fresh blood into the political regime. And, as many rightly point out, the regime needs not a politician but a technocrat who would mitigate, if not resolve, all these economic and social problems.”

However, Vavilov stresses that there is no figure in sight that could unite the Egyptian people: “Current opposition is an amorphous entity that has taken shape spontaneously. Their program is all negative; it has no constructive elements. Morsi will go, but who will be next?”

The expert did not rule out a return to authoritarian rule: “Ordinary Egyptians — 30 percent of whom are illiterate — want law and order. So far, they do not need democracy. The main thing for them is to feed their big families.”

Yevgeny Satanovsky, president of the Middle East Institute, believes the situation in Egypt is more serious than it might appear to the outside observer. “The country is, indeed, on the brink of a breakup. The rural folk do not obey the center, and Suez Canal cities say, ‘Enough feeding Cairo,’ while the Delta lives separately from Upper Egypt,” he was quoted as saying by Vesti FM radio.

In Satanovsky’s opinion, the military must step in to prevent disintegration of the country, because the danger of a civil war is very real: “Fifteen million signatures have been collected under the call for Morsi to resign. That is several million more than the number of votes he received. Street fighting, for example, in Alexandria and Cairo, involves guns, knives and stones. The outcome of all this is unclear.”

Nikolay Surkov, an associate professor in the department of oriental studies at MGIMO, notes that the situation in Egypt is deteriorating faster than expected: “Initially, the liberals in Egypt did not intend to topple Morsi, in order to avoid increasing instability. Their plan was to wait for the next presidential elections and come to power peacefully. However, economic problems have aggravated the situation.”

“Under the circumstances, interference by the military is the only chance to prevent more bloodshed and to restore a semblance of order. But they might have to stay in power for some time, because polarization in Egyptian society is too strong and there are no political leaders who would win wide support among the people in the streets,” the expert said.

According to Surkov, the military would have to ask urgently for foreign assistance in order to feed the population and prevent further unrest: “Under the circumstances, external donors — especially the Western countries — should understand that stability in Egypt and, indeed, throughout the Middle East, partly depends on them.”

Surkov told RIR that the current events on Tahrir Square should be seen not only from the point of view of Egypt’s internal policy: “They will have serious consequences for the entire region. Egypt is the biggest Middle East country and an example for the others. Many observers in the Arab world see the new confrontation on Tahrir Square in Cairo as a decisive battle between Islamists and secular forces — one that will determine whether the region follows the Islamic or the Western path.”