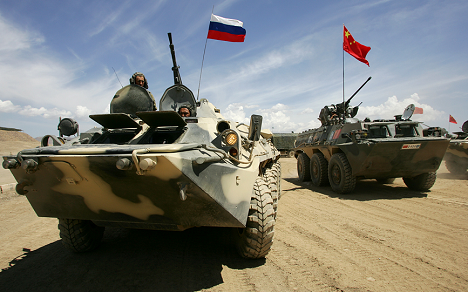 The only possible reason remaining for a war between Russia and China would be a territorial claim. Source: Ministry of Defence of the Russian Federation / mil.ru

China can theoretically have issues with Russia, but only if the latter finds itself completely disintegrated as a nation for whatever reason.

The possibility of a war between China and Russia has long been a fertile topic for armchair critics of varying degrees of madness. Those who propose such scenarios typically belong to one of two groups. There are self-proclaimed strategists and role-gaming fans; they don't really care who might be fighting whom, and to what ends. What interests this category is the process. There are also the pragmatic ones, those who do the scaremongering professionally and get paid for this. Submit copy and collect your fee. Supply chilling details and get some TV air time, meaning greater popularity ratings and, as a consequence, a heftier bank account.

There is one simple question however which typically remains ignored in these discussions: why? Indeed, why would China want to fight Russia? What is it that Russia has and China doesn't, and which could only be had by attacking Russia? Most armchair experts point out that war is possible over natural resources. But this does not appear to be a valid answer.

There are two reasons why a nation might decide to go to war over natural resources: because it doesn't have enough of its own, or because it wants to block another country's access to such resources. In all other instances it is cheaper and easier to simply buy whatever you lack. War is a costly affair. Which resources exactly cannot China openly buy from Russia? The answer is none. And if we look at the going price of Russian crude for China, it is actually Moscow that should start a war on Beijing in order to free itself from the enslaving contract.

But could it be so that China is wishing to stop someone else from accessing certain resources? Absolutely not. China's competitive point is in flooding the global markets with dirt-cheap commodities. Japan with its hi-tech industry has already stopped manufacturing hard drives, memory stocks and mobile phones locally: it's all made in China nowadays.

The only possible reason remaining for a war would be a territorial claim. However, which is more important for China: occupying Russia's Maritime Territory or returning Taiwan? All of Beijing's post-World War II rhetoric has been centred around the idea of reuniting Taiwan with mainland China. Far from being a hidden agenda, this idea openly dominates the Chinese foreign policy. In this respect however it is the USA, not Russia, which stands between Beijing and its coveted goal.

China won an important political victory in 1997 by returning Hong Kong; never mind that in order to achieve this, Beijing had to come up with the previously unheard-of "One country, two systems" formula. Only a blind person could fail to see this as a strategic stepping stone in China's plan to achieve similar reunification with Taiwan. In fact, immediately after the Hong Kong sovereignty transfer Beijing's relations with Taipei became much more tolerant and friendly, even though there are still certain problems at times.

Another territorial thorn in China's side is the on-going dispute with Japan over the Diaoyu (Senkaku) archipelago in the East China Sea. The islands themselves are of no worth to either side; what is more valuable is the 12-mile territorial waters and 200-mile exclusive economic zone around the archipelago, where hydrocarbon deposits have recently been found. One problem for Beijing, however, is that Japan is a close ally of the USA (not of Russia).  Washington has recently reacted very nervously to Beijing's latest Diaoyu-related escapades. Russia for its part limited its reaction to the usual calls on the opposing parties to resolve the conflict peacefully.

The USA is not going to stand down its Pacific presence; on the contrary, it is expanding that presence slowly but surely.

Xinjiang is another headache for China: Uyghur separatism is raising its head in that region, and local terrorist groups are preparing for action. So far these militants are undergoing training at Islamist camps in Syria but they will be back, team-trained and ready. One more potential problem for Beijing to reckon with is the Taliban, which may again come to power in Afghanistan very soon. The Taliban already has a strong presence in Tajikistan's Gorno-Badakhshan Region, which is situated uncomfortably close to Xinjiang.

So is Russia backing the Taliban? Is it Russia that the Taliban is holding talks and consultations in Doha? On the contrary, we are again talking about the USA, represented by senior officials of the Department of State.

China does have its share of problems and pressure points. Some of these may well merit a war in the future. But where does Russia come in here? What problems (real problems, not hypothetical ones) would China solve by attacking Russia? Does it really have interests worth fighting Russia for?

Of course China can theoretically have issues with Russia, but only if the latter finds itself completely disintegrated as a nation for whatever reason. Only in that case will Beijing have to cross the Amur, and even then its aim would be not to conquer its neighbour but to create a buffer zone against millions of potential Russian refugees. Even then, such a scenario could hardly be described as a full-blown war. On the other hand, it does have at least some relevance as distinct from the numerous role-playing horror stories.

Hypothetically of course we could lock ourselves in a war room and concoct possible scenarios for what China's invasion of Russia might result in – just for the fun of it. In this case however we will have to ignore the question of why China would have to attack in the first place.

No post-war settlement can possibly make up for the economic collapse and tens of millions of victims caused by an armed conflict. The USSR of 1941 had it relatively easy: the country's industrial potential got evacuated beyond the Urals and the Nazi troops immediately stopped being a threat. Is there really someplace safe where China can hide its economy away if the air-raid sirens start wailing?