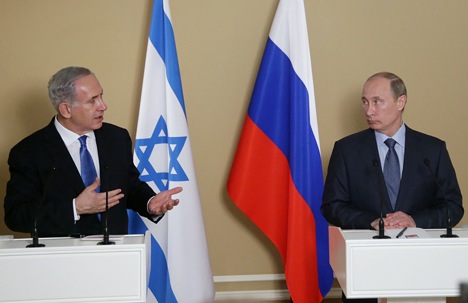 Despite differences the interactions between Russia and Israel have continued in a fruitful direction. Photo: Putin and Benjamin Netanyahu at the joint press conference at Putin's residence in the Black Sea resort of Sochi, on May 14, 2013. Source: AFP / East News

An international understanding, supported by all the major powers and initiated by Russia, will defuse much of the tensions in the Middle East and the rivalry between Teheran and Tel Aviv.

It will be an interesting, and perhaps fruitful, exercise to explore possible roles Russia can play in the crises that engulf the Middle East, some of which are indeed protracted and hard nuts to crack, like the complicated ties between Iran and Israel. The Iranian nuclear issue and the Israel-Palestine conflict have tested the nerves of the world leaders, and in this context the role of Russia, a major power in the world scene with stakes in these issues, is something that calls for analysis.

While the contrasting positions of Russia and Israel on the issue of Syria might have widened the gap between the two countries, all is not bad between the two. Russia and Israel share a relationship with the Russian Diaspora constituting a major segment of the Israeli population with Russian being the third most spoken language in Israel. When the massacre of Jews was going on during the Second World War, the Soviet Union played a crucial role in defeating the Nazis.

While representing Israel during the inauguration of the Jewish Museum and Tolerance Centre in Moscow last November, Israeli President Simon Peres extolled Russia’s role in this regard. Peres said, “I think the whole world is deeply indebted to the Russian people for its superhuman efforts to eradicate the Nazi threat.” The Israeli leader also counted on Russian leadership to play a similar role to checkmate the current instability in the Middle East and to bring peace in troubled regions around the world. To quote Peres, “On your (Putin’s) shoulders and on the shoulders of Obama, who again became president of the United States, lies a heavy responsibility. Whatever disputes there might be, there is a shared responsibility to humanity.”

Peres’s words cannot be termed as merely fluorescent without substance. Despite differences the interactions between the two countries have continued in a fruitful direction. Last May Israeli Prime Minister, Benjamin Netanyahu visited Moscow to deliberate on Syria issue with the main objective of halting Russia’s supply S-300 missile system to Syria. Israel is afraid that this modern weapon system may fall into hands of Hezbollah with which it has long rivalry; hence the supply may threaten its security and integrity. Russia’s position is that under international law it can supply weapons including S-300 missile system to Syria, though reports suggest that Russia has not yet supplied the full weapon system which needs a sophisticated training for its operation.

The Iranian issue is more complicated. Russia and China have harped on a peaceful resolution of this issue through political means, while Israel and its allies including the US have viewed Iran with more suspicion. Iran has insisted the peaceful purpose of its nuclear programs. Putin can use his forthcoming visit to Iran and cultivate relationship with the new Iranian leader Hassan Rouhani, perceived to be moderate, to develop an international framework to address the Iranian issue. Many other powers have expressed hope that Rouhani will be more forthcoming than his predecessor to address the nuclear issue. An international understanding, supported by all the major powers including the permanent members of the United Nations Security Council, initiated by Russia, will defuse much of the tensions in the Middle East, and rivalry between Iran and Israel.

One of the major contentious issues between Iran and Israel is the issue of Palestine. Iran has not recognized Israel as a sovereign entity and perceived Israeli policy towards Palestine as essentially discriminatory. Russia along with other members of the Quartet can work towards bringing both the countries together.

It may be possible to craft an arrangement under which Israel will respect Palestine’s right to sovereignty and integrity and vice versa, and Iran recognising Israel as a sovereign state in the Middle East and moderating its nuclear weapon program. The Middle East Quartet comprising the United Nations, European Union, Russia and the US has recently expressed hope of resumption of dialogue between Israel and Palestine. Though Palestine has expressed pessimism on the role of the Quartet particularly some of its members, Russia can use its relationship with Palestinian leadership towards bringing both the parties together.

Any shortsightedness in the Middle East will prove dangerous, and farsightedness will be propitious not for Israel, Palestine and Iran, but for the whole region. The much hyped Arab Spring and its much touted goal of democracy have not actually worked as situations in Tunisia, Libya and Egypt have revealed recently. Besides, in the post-Cold War global order, which has witnessed significant rise in intra-state, rather than inter-state, conflicts it is raw prudence that major powers must come together to address conflicts across globe in a non-zero sum game framework.

Attempts to drive out Russia from the Middle East scene by using Syria as a proxy battle field has actually not worked. Such attempts will further jeopardize prospects of peace. Russia’s UN Representative Vitaly Churkin called the recent meeting of Syrian Opposition Council with the UN Security Council members as ‘useful’ and pinned hopes on the proposed peace conference on Syria. According to him, “There is still a good chance ... because the alternative would be so horrifying, so it is definitely better to keep trying.” Russia under leadership of Putin can play a dynamic role in bringing the rivals to dialogue table and in ushering peace in the region.