Snowden has left the building: A gift to US-Russian relations 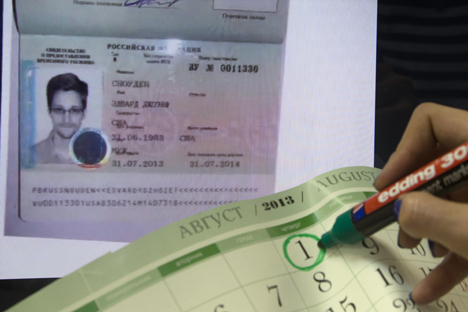 Snowden crossed the Russian border, after spending a month in Sheremetyevo’s transit zone with a copy of Dostoyevsky's Crime and Punishment for company. Source: Alexei Naumov / RIA Novosti

Barack Obama and Vladimir Putin have good cause to thank the man whom the US government has fruitlessly asked Russia to extradite and whom the Russian government has granted temporary asylum.

So Snowden has left the building. The NSA leaker’s departure from Moscow’s Sheremetyevo airport, for an undisclosed location in Russia, on Thursday is turning into a real blessing for the US-Russian relationship.

It may sound perverse, but both Barack Obama, and, to a lesser extent, Vladimir Putin have good cause to thank the man whom the US government has fruitlessly asked Russia to extradite and whom the Russian government has just granted temporary asylum.

That Snowden has been allowed him to cross the Russian border, after spending a month in Sheremetyevo’s transit zone with a copy of Dostoyevsky's Crime and Punishment for company, does not amount to a crossing of the Rubicon in the US-Russian relations – despite stern warnings from American congressmen. But it does give Obama a good excuse to back out of the bilateral summit scheduled to take place in Moscow on September 3-4.

Why Obama would want to execute that particular U-turn is clear: if it goes ahead as planned, this meeting could well earn itself the dubious honor of being the least productive, if not most meaningless, US-Russian summit since the Cold War ended.

Obama and Putin agreed to the summit during their talks on sidelines of the G8 summit in Northern Ireland on June 17. Their meeting at Lough Erne actually turned out quite productive – putting the brakes on the slow breakdown of the bilateral relationship since late 2011. The two leaders announced the establishment of a bilateral working group on cyber security, the revival of regular meetings between the US vice president and the Russian premier and also between the two countries' defense and foreign policy chiefs, the replacement of an agreement to secure loose nukes, and – for good measure – a joint pledge to organize a peace conference on Syria.

While sifting through these June 17 deliverables, I could not help wondering whether the two leaders had saved anything that, if unveiled in Moscow, would have justified a full-fledged summit just a day before their next meeting, at the G20 gathering in St. Petersburg.

The biggest deliverable would be, of course, an agreement on missile defence. Differences over this issue have recently been overshadowed by the Snowden affair, but it nevertheless remains the most significant long-term irritant in the bilateral relationship.

Russian Deputy Defense Minister Anatoly Antonov revived some hope that this issue might be resolved when he addressed the NATO-Russia Council in Brussels. His remarks at the June 24 event, as reported in the Russian press, contained no references to the biggest stumbling block in the US-Russian dialogue on missile defense: Moscow's demand for legally-binding guarantees that the US missile defence system is not directed against Russia.

Instead, Antonov said, Russia would like to see a document "guaranteeing that the Russian Defense Ministry's contributions to a common cooperation project on missile defense would not be later used against it."

"We are simply bound to find solutions to the problems that are dividing us," Antonov said.

Antonov also said that missile defense will be discussed when Russia’s defence and foreign ministers meet the US defense and state secretaries in Washington on August 9.

These meetings have, in the past, generated some creative ideas on how to bridge the gap between the two countries' positions on the long-running and thorny issue of missile defence. But it would be plain unrealistic to expect US and Russian negotiators to come up with a full-fledged agreement that the two leaders can sign off when and if they meet in Moscow in September.

Of course, the two leaders can always sign off on another declaration on strategic cooperation on security issues if the Moscow summit does take place. But it will take more than a piece of paper to keep the summit from flopping – after all, the US-Russia Strategic Framework Declaration that Putin signed with George W. Bush in Sochi on April 6, 2008 was spectacularly impotent in this regard.

Putting the Snowden saga in perspective

That declaration contained some bold ideas on how to advance the relationship, including "creating a system for responding to potential missile threats in which Russia and the United States and Europe will participate as equal partners."

But its adoption did not save the Sochi summit, slammed as a failure by press, and was powerless to prevent the further deterioration of the bilateral relationship that, by late 2008, had developed a distinctly Cold War-esque chill.

In short, it is best that the two leaders refrain from meeting for the sake of meeting and instruct their aides on both sides to negotiate in earnest to find real solutions to existing long-term problems and advance projects that make the relationship more sustainable.

Real progress on trade and investment deals are worth more to both sides than a showbiz summit from which each will emerge empty-handed, or, what’s worse arguing in front of press over whether Snowden’s alleged crime should be punished – causing the bilateral relationship to deteriorate further.