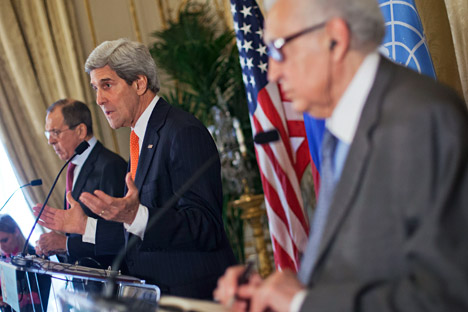 The chances of the Syrian peace conference going ahead as scheduled on January 22 do not look too good.

The idea of holding the Syrian peace conference came during a visit to Moscow by U.S. Secretary of State John Kerry in May 2013. The purpose of the event is to implement the international agreements reached in Geneva in July 2012, and kick-start a political settlement of the Syrian crisis by dragging representatives of the Bashar Assad government and the opposition to the negotiating table.

It is expected that Swiss President Didier Burkhalter will be the first to address the delegates on the first day of the conference. He will be followed by UN Secretary-General Ban Ki-moon, and then by the two co-initiators of the event, Russian Foreign Minister Sergey Lavrov and Kerry. Syrian representatives, both from the government and the opposition, and foreign ministers of other participating states have also prepared their speeches. Invitations to attend the conference have been sent to 30 different capitals, including New Delhi. Once the orations have been delivered, the warring factions are supposed to start negotiating.

Obviously, everyone understands very well what a challenge this is going to be.

Speaking to journalists about the upcoming conference in late December,  Lavrov stressed that “the success of the enterprise is by no means guaranteed”. On January 16, Kerry had this to say on the matter: “The Geneva peace conference is not the end but rather the beginning, the launch of a process, a process that is the best opportunity for the opposition to achieve the goals of the Syrian people and the revolution, and a political solution to this terrible conflict that has taken many, many, many, too many lives.”

In essence, Kerry was using the media, rather than direct channels of communication, to urge the Syrian opposition to attend the Geneva 2 conference. The opposition was expected to confirm its attendance on January 17 – but the confirmation has yet to arrive.

In the words of the Russian foreign minister, “this is going beyond the pale of reasonable behaviour.  The main reason for their position is not that they want to prepare as well as they can for the conference that will determine the future of the Syrian state and the Syrian people,” Lavrov told journalists on January 17. “The main reason is internal squabbling among the various groupings within the coalition, which all have the backing of various foreign sponsors.”

This inevitably raises questions about the political relevance of the part of the Syrian opposition that is usually described as external, i.e. led by émigrés, and that is represented by the National Coalition of Syrian Revolution and Opposition Forces.

The problem is that although the National Coalition has been recognized by the West as one of the participants in the peace talks, it does not actually have much control over the armed rebels fighting against the government. What is more, the head of the Supreme Military Council of the Free Syrian Army, Salim Idris, who speaks for secular-minded rebels, has said that the widely expected decision by the National Coalition to send its delegates to Geneva would be “a wrong choice,” and that it would not be in the interests of the “Syrian revolution.”

The radical groups Jabhat an-Nusra and the Islamic State of Iraq and the Levant, which want to create an Islamic Caliphate and impose Sharia law in Syria, are even less inclined to negotiate. They are not interested in the entire peace process.

Obviously, such a situation devalues any possible result that may be reached at Geneva 2.

Moscow proposes redressing the balance by also inviting the internal Syrian opposition that continues to work within the country’s political system.

“From the very beginning of preparations for Geneva 2 we have been speaking in favour of having the internal opposition, the patriotic opposition also represented at the Syrian settlement conference,” Lavrov said. He added that it would be especially useful to secure the participation of the National Coordinating Committee and the bodies representing the Syrian Kurds. So far, however, none of these outfits has received an invitation from the UN Secretary-General to attend the conference.

All of this suggests that owing to problems with the representation of the Syrian opposition, the Geneva 2 conference may have to be postponed, at the very least. That, however, would not be a good outcome for anyone involved. It is not just a matter of the event’s organizers losing face. “Any delay with the peace talks only strengthens the Islamist extremists fighting in Syria,” says Vyacheslav Matuzov, head of the Russian Society for Friendship and Business Cooperation with the Arab States. “Defeating those Islamists is probably the main purpose of Geneva-2.”