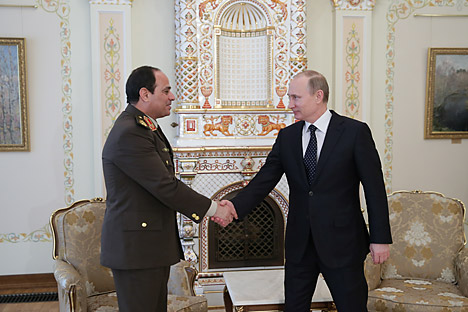 Speculation is rife in the Arab media that Egypt will buy Russian weapons in a multi-billion dollar trade. Saudi Arabia and the UAE are believed to be financing the deals

Egyptian media is reporting that Russia has signed a $2 billion arms deal with Egypt. According to the reports, Saudi Arabia and the UAE will finance the deal. Officials in Cairo have so far refused to comment, and analysts are debating whether this information is accurate.

The first reports of a possible arms deal were published last November when Defence Minister Sergei Shoigu and Foreign Minister Sergei Lavrov were visiting Cairo. According to Kommersant, after talks with his Egyptian counterpart, Lavrov confirmed that one of the main topics they discussed was, in fact, military cooperation. Reports even suggested the future contract would be worth $4 billion, however, the specific details of the agreements had not yet been discussed.

The fact that Moscow and Cairo are negotiating an arms deal only means that an old tradition is being revived. In the 1950-70s, the USSR was the largest supplier of arms to Egypt. In the last years of President Hosni Mubarak's term in office, Russia began to re-emerge on the Egyptian market. In 2010-2011, Russia and Egypt reached a preliminary agreement to buy military equipment (mainly helicopters) and modernize their air defence that was worth $1.5 billion.

However, after the overthrow of Mubarak, military cooperation was halted. Egypt simply did not have money to buy weapons. The situation changed after Morsi was overthrown. Now the main hope lies with external sponsors.

Saudi Arabia supports the country's current government and is one of its major sponsors. In addition, the Saudis have already subsidized weapons purchases for Muslim countries. For example, the Saudis have repeatedly provided Morocco with soft loans to purchase arms.

The Egyptian media has not yet reported what exactly will be supplied under the proposed Russian-Egyptian deal. Different scenarios have been offered up. It could be MiG-29 fighters or Kornet anti-tank missiles. In addition, a number of Egyptian observers are saying it may be the Iskander tactical missile. However, experts believe that this is unlikely.

Vzglyad newspaper quoted Ruslan Pukhov, Director of the Centre for Analysis of Strategies and Technologies, as saying, “I think it is unlikely that Egypt will be the first foreign country to acquire the Iskander ballistic missile. I think that the Egyptians will buy air defence weapons. Firstly, because they already have some, meaning they will have fewer problems maintaining them. And secondly, because partially, Russian air defence systems are second to none in many ways.”

The question remains as to why Egypt would spend money on Russian weapons now, when the economic situation in the country leaves much to be desired? Alexander Ignatenko, President of the Institute of Religion and Politics, commented in an interview with Vzglyad that the current leadership of Egypt feels that the country has a large number of external threats.

“Don't forget that next to Egypt is Libya, where the situation is highly unstable, and from which we can expect all kinds of trouble. In addition, counter-terrorist operations are being conducted on the Sinai Peninsula,” Ignatenko said. “The Egyptian army is fighting there with the Islamists, and Qatar -- Saudi Arabia's rival for leadership in the region -- is working behind the scenes (some believe). Finally, the situation on the southern borders of Egypt is destabilizing due to the complicated relationship between Cairo and other countries in the Nile region. Ethiopia is building a dam on the river that will significantly impact Egypt's water supplies. The Egyptian authorities will have to tackle this problem somehow. And there isn't a 100 percent guarantee that it won't find a military solution.”

Observers also note that Egypt has the largest army in the Arab world, which acts a deterrent to Israel and is one of the guarantors of security for the Arabian monarchies, particularly in the face of the Iranian threat. So a weaker Cairo would change the balance of power in the Middle East. Given these conditions, Saudi Arabia and the UAE actually may finance the purchase of weapons.

However, some Russian experts doubt that Egypt is purchasing weapons, because the amount of the deal is so high. “Egyptians really are in need of weapons because the army has not upgraded its arsenal in a long time. But it seems obvious that the Egyptians currently have no money to pay for these weapons,” explained Yelena Suponina, Head of the Centre for Asia and the Middle East of the Russian Institute for Strategic Studies in an interview with Kommersant FM. “Gulf countries such as Saudi Arabia and the Emirates supported Egypt's military, in part with very significant multi-billion dollar loans. Do they have the strength and capacity to pay for arms deals as well? That is the big question. Of course, they might pay something, but amounts greater than $2 billion seem unlikely.”