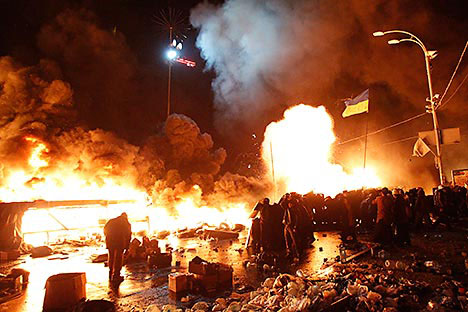 In an address to the nation Wednesday, Viktor Yanukovych said opposition leaders neglected the main principle of democracy by taking to the streets instead of obtaining power through fair elections. Death toll on Kiev rises to 25

Ukrainian President Viktor Yanukovych said Wednesday that opposition activists had crossed the line by calling for supporters to take up arms at mass protests intended to oust him from power.

At least 25 people, including nine police officers, were killed in bloody, day-long clashes that ran into the early hours of Wednesday morning in the Ukrainian capital. Police said protesters initiated the escalation in violence by using firearms.

The death toll may rise as numerous eyewitnesses have reported seeing bodies not apparently accounted for by the authorities.

In an address to the nation Wednesday, Yanukovych said opposition leaders neglected the main principle of democracy by taking to the streets instead of obtaining power through fair elections.

“They crossed the line when they called people to arms. This is a flagrant violation of the law,” he said, adding that those responsible should face justice in court.

“I told them many times that we will have an election soon,” he said. “If people confide in you, then you will take power. If not, you won’t be in power. Either should happen via legitimate means, in line with the Ukrainian constitution.”

Yanukovych called on the opposition members to distance themselves from radicals provoking bloodshed and sit down for talks, saying it was not yet too late to stop the conflict.

The president said he would not use force against the opposition and would instead push for dialogue to resolve the political crisis. “I have always considered that using force would be a mistake. The best and most efficient way is to find common ground.”

Unrest erupted around noon Tuesday as thousands of people marched on the parliament building, where a standoff was taking place over proposed constitutional reforms that the opposition said could provide a way out of the political crisis that is paralyzing the country.

Groups of mostly young men in masks and helmets wielding shields and sticks were confronted by riot police, who deployed rubber bullets, stun grenades and tear gas. Pictures from the front lines showed rioters ripping up cobblestones to hurl at police.

The violence that ensued lasted for hours and resulted in numerous deaths and hundreds of injuries. Kiev city law enforcement officials said that nine police officers were killed during the fighting and that almost 300 were injured, 35 of them critically. The Health Ministry said a total of 25 people were killed.

Mass protests initially erupted in Kiev and other Ukrainian cities in late November after the government backed away from deals to deepen political and economic cooperation with the European Union and instead opted for closer ties with Russia.

Although at first discontent was focused on that about-face move on EU ties, protests have since taken on a more general anti-government quality, calling for the president’s ouster and early elections.