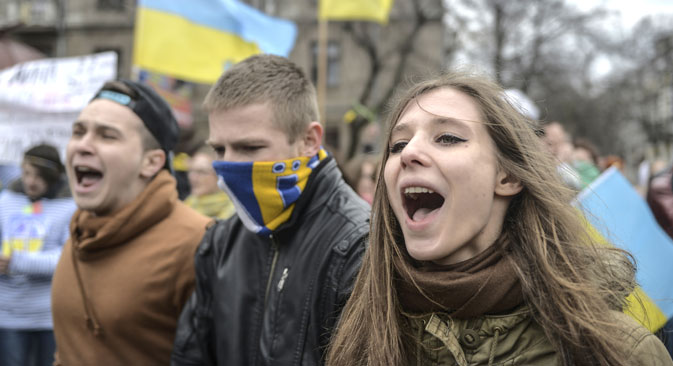 Participants of a Ukrainian activists' rally against the Crimea referendum, near the monument to Vladimir Lenin in Simferopol. Photo: RIA Novosti / Valery Melnikov

After Crimea’s parliament voted to join the Russian Federation as a constituent of the Russian Federation and scheduled this issue for a referendum on March 16, Russian and foreign experts raised the alarm about escalation of political tension in the region. There’s growing consensus that the Crimea crisis may result in a second Cold War if the world fails to come up with a compromise.

According to Piotr Kościński, the head of the Eastern Program at the Polish Institute of International Affairs, any Russian attempts “to forcibly annex the Crimea” are “unacceptable to the international community” and indeed may lead to a new Cold War.

In contrast, Director of the Public Policy Research Centre Vladimir Evseev argues it is the West’s “political myopia” that could lead to a new Cold War.

“The precondition of a new Cold War is not the Crimea referendum, but the West’s position, extremely one-sided and politically short-sighted,” he said in a telephone interview pointing out that the West tries by all means to pressure Russia and “is ready for this to bring instability to the whole territory of Ukraine.”

Assessing the legitimacy of Crimea’s referendum

Kościński doesn’t see any reason to disengage Crimea from Ukraine, “because the rights of Russians living in the peninsula are absolutely not threatened.” He claims that Russian soldiers are deployed in the Crimea - not only in the Russian military bases, but also around the local Government buildings, airport in Simferopol and Ukrainian military bases.

“So Russia could be rightly accused that it just directs the whole referendum initiative,” Kościński argues. “And that Russia would try de facto to forcibly annex Crimea.”

Evseev argues that the upcoming referendum in Crimea is more legitimate than the recent actions of the current Ukrainian authorities in Kiev, which used violence to seize power. According to him, these authorities “expressed the interests not of all Ukraine, but only its Western part that was presented by radical nationalists.”

“Crimea has the right to voice its point of view and decide if it should be a part of Ukraine or not, if it should be annexed by Russia or not. And the current authorities that try to stop the free will of its citizens, they don’t have any grounds to prevent this referendum.”