A score for a “Concert of Nations” 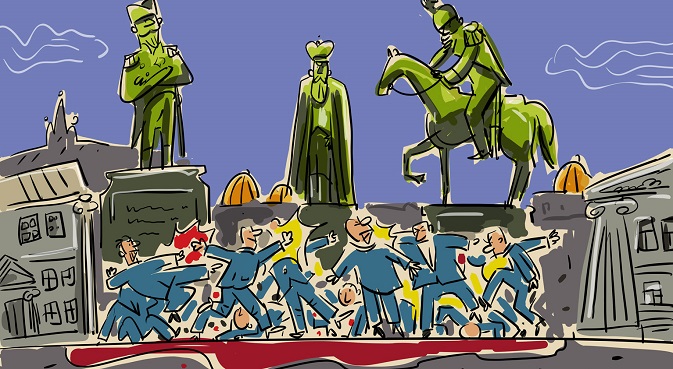 The crisis in Ukraine has become a manifestation of conceptual and legal chaos in the international arena.

When it comes to the crisis in Ukraine, discussion of the principles of world order has entered a new phase. U.S. Secretary of State John Kerry admonished Russia for its “19th-century behaviour.” After all, international issues are now resolved differently. We can grant that. But what exactly does “19th-century behaviour” entail?

In an international and legal sense, the 19th century started with the Vienna Congress of 1814–1815. This marathon session of negotiations that included monarchs (Alexander I, Franz I of Austria and the most eminent diplomats and statesmen of their time—Metternich, Talleyrand, the Duke of Wellington and others) set limits on the eve of the Napoleonic Wars. The Old World was shaken beginning in the late 18th century, when the French Revolution upended European politics. The revolutionary ardour, which frightened conservative regimes, was reborn in Paris’s political expansion, an expansion that incited the major powers to unite against Napoleon.

The political 19th century lasted nearly 100 years. The Vienna System, which gave rise to a congress, collapsed in August 1914, when conflicts among the European grandees, their colonial appetites and a splash of chauvinism sparked World War I. At this juncture, the “good old Europe,” along with the golden age of classical diplomacy, came to an end.

The 20th century was marked by catastrophes: two world wars, the collapse of empires, the rise and fall of totalitarian ideologies, and repeated genocides. Although the Cold War was a global military and ideological standoff, it looked like a calm period. The nuclear missile deadlock between the Soviet Union and the United States and the threat of a total mutual annihilation guaranteed an unprecedented stability, and tests of strength on the periphery of global politics remained completely under the control of the “big bosses.” However, the monitoring did not survive the end of the conflict.

Against this backdrop, “19th-century behaviour” looks like an almost lost El Dorado. Between 1815 and 1910, Europe avoided major conflicts between large governments. This did not mean either a halt to acute rivalries or a lack of military conflicts (it suffices to recall the Crimean, Franco-Prussian and Russo-Turkish Wars). However, the essence of the “Concert of Nations,” which was convened after Vienna, consisted in the fact that in case of any conflicts, the great powers had the ability to restore the balance by using diplomacy. At the end of each crisis, the relations of the main players were “specified,” and the conditions of balance were adjusted. This is what happened in 1856 at the Congress of Paris (after the Crimean War), in 1871 at the London Conference (after the Franco-Prussian War) and in 1878 at the Congress of Berlin (after the Russo-Turkish War).

The “Concert of Nations” collapsed for objective reasons. Global politics stopped being synonymous with Europe. The rapid development of capitalism, the first wave of globalization and colonial expansion broadened the playing field and raised the stakes. Internal ferment grew among the continental powers, and this complicated the upholding of the balance.

Two hundred years after the opening of the Vienna Congress and 100 years after the start of World War I, it turns out that what is lacking now is precisely what distinguished the 19th century.

After the cataclysms of the first half of the last century, and the frozen stability of its second half, a period of freedom—in every sense of the word—set in: freedom as the ideological understanding that is central to the American worldview, and freedom from the international laws and restrictions of the past. At first, it seemed that this second type of freedom spread only to the victor in the conflict: the United States and the West. But it gradually became clear that freedom is universal. With the erosion of principles, and then the decency to act according to one’s own discretion, the world stage became a free for all. But the West’s economic and power monopoly in the early 21st century in no way looked as imposing as it still did 15 years ago. That is, Washington and its allies could not force others to follow its orders.

The Ukrainian crisis is a particular manifestation of a conceptual and legal chaos that has been reigning on the world stage, but it is striking and symptomatic. It is more indicative that what is needed is precisely a genuine professional diplomacy in the spirit of the 19th century, a diplomacy that is familiar from textbooks but whose actual practice has been virtually forgotten. Indeed, after the Cold War, the need for compromises and alignment of interests seemingly fell away—the victor would define the degree of responsibility of the participants in local conflicts and what was needed to “restore justice.” However, such a model has now also been exhausted—even the world’s most powerful nations do not have enough strength and skill.

The flaw of the modern world is a total imbalance in everything: opportunities, interests, notions of one another. “Nineteenth-century behaviour” is useful in order to find diplomatic solutions without the ideological exaltation inherited from the 20th century, and on the basis of sober calculation and with an adherence to gentlemanly etiquette in relations with opponents. The world needs a global concert of nations, and their directors need a classical score, albeit in a modern orchestration.