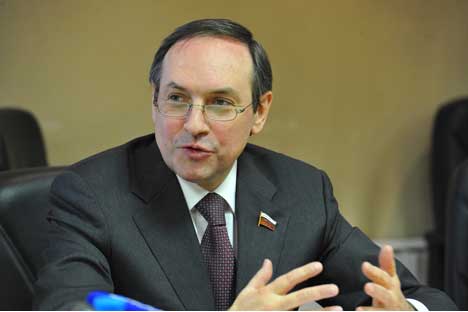 Vyacheslav Nikonov: "BRICS partners, albeit not officially but in expert circles, expressed their complete understanding of Russia’s stance as a response to the West-inspired crisis in Ukraine". Source: PhotoXpress

Senior Russian lawmaker praised BRICS partners for their stand on the Crimean issue and believes that cooperation within the grouping is likely to grow.

Cooperation within BRICS is now the overriding, central geopolitical format for Russia, Chairman of the Russian National Committee for BRICS Studies, State Duma deputy Vyacheslav Nikonov said in an interview with Itar-Tass.

Nikonov led the Russian delegation at the sixth BRICS academic forum in Rio de Janeiro. He believes that “amid the present principal disagreements with the USA and the EU over Ukraine and because of G8 reformatting, Russia will develop increasingly closer ties with BRICS members and the countries of the Shanghai Cooperation Organization (SCO), as well as the Eurasian Economic Community with the participation of several former Soviet republics and other interregional organizations.”

He added, “The BRICS members at the recent meeting in Rio de Janeiro did not say a word to denounce Russia for including Crimea and the city of Sevastopol into the federation. Quite on the contrary, BRICS partners, albeit not officially but in expert circles, expressed their complete understanding of Russia’s stance as a response to the West-inspired crisis in Ukraine.”

The BRICS summit scheduled for July in Brazil will ponder upon more than 20 cooperation formats which are now under consideration in ministries, institutions and think tanks of the member countries.

“The recent refusal of the major settlement systems Visa and Mastercard to service cards of several Russian banks put Russia and other BRICS countries face to face with a need to put into practice the idea of a joint Bank of Development and a Stabilization fund for mutual settlements in national currencies and establish national settlement systems,” Nikonov added.

“The Brazilians are now most concerned about economic growth issues, social policy, environmental issues, and aid to developing countries,” he said. The summit’s focus will be on information security amid the revelations by former CIA contractor Edward Snowden “that brought to light bugging of Brazilian President Dilma Rousseff’s phones.”

“Russia’s course to turn BRICS into a respected international organization is serious and long-haul. BRICS is not a binding structure, it does not encroach upon anyone’s sovereignty. It is nothing like the European Union, whose headquarters in Brussels take away most part of the member countries’ sovereignty. BRICS is not planning any supranational bodies to which imperative rights would be delegated. BRICS is the 21st century cooperation format and by no means a hierarchical organization,” the MP said.

“There is no place for a single centre of influence in the modern world. The idea of a multipolar world was actively promoted in geopolitical polemics in the 90s when the world had just dropped the bipolar system and some hotheads declared it was time to have the only center to decide in international affairs - the USA,” Nikonov added.

“BRICS countries have a number of trump cards up their sleeve,” the MP opined. “Brazil is the largest Latin American state with a highly developed industry and agriculture. Russia is the world’s major supplier of hydrocarbons. China demonstrates brisk economic growth. India has huge intellectual resources. Furthermore, more than 2.5 billion people live in China and India - almost a quarter of the global population. South Africa is the most mature country on the African continent with enormous natural resources and developed agricultural sector, whose produce suffices not only for the nation itself but also makes the country one of the leading agricultural suppliers.”

“Therefore, it is BRICS that is capable of offering the world a historical alternative and undertake to build bolsters of the new world order,” believes the politician. “BRICS’ key task now is to assist transition from the US hegemony to a polycentric world order, where interference in countries’ internal affairs for the overthrow of unwanted regimes is unacceptable.”'