India's abstention on Ukraine resolution does not mean neutrality 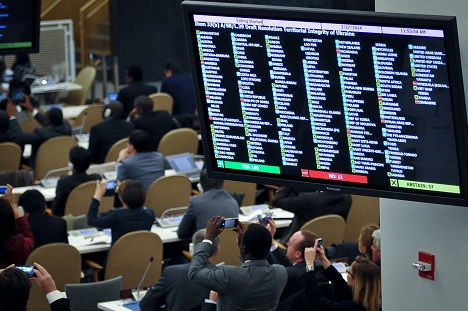 At the United Nations General Assembly, India took a stand – that of not supporting the Ukraine resolution on Crimea.

India's abstention from voting on the Ukraine resolution in the United Nations General Assembly on Thursday, March 27, shows that India has not succumbed to tremendous pressure of the West. It also shows that Indo-Russian relations remain warm and vibrant and there is no way that the West can wean India away from Russia.

India could have done better by going one step further by voting against the resolution. However, like 57 other nations in the 193-member UNGA that abstained from the voting, India felt it better not to wade into the ongoing spat between Russia and the West.

Two things need to be stated upfront here. One, India's abstention does not mean neutrality. In a way, India has taken a stand – that of not supporting the Ukraine resolution. The resolution, drafted by Canada, Costa Rica, Germany, Lithuania, Poland and Ukraine on March 24, does not name Russia directly. The final draft of the resolution, which was passed by UNGA by a 100-11 vote with 58 abstentions, can be seen here.

Thus, India is among the countries who have chosen not to side with the West on the Crimea issue. In this context, Russia is not in isolation as stressed by Russian Permanent Representative to the United Nations Vitaly Churkin. India would not disagree with Churkin who has gone on record as saying thus: “This is a rather good result for us. We have earned a moral and political victory. There can be no question of Russia’s isolation in this situation.”

The Ministry of External Affairs has not released Explanation of Vote (EOV) on the Ukraine resolution and there is no clarity whether it would be coming up, in the first place. This is in stark contrast to the fact that the MEA promptly released EOV by the Permanent Representative of India to the UN Offices in Geneva Dilip Sinha at the United Nations Human Rights Council (UNHRC) on the resolution on promoting reconciliation, accountability and human rights in Sri Lanka the same day.

India abstained from the Ukraine resolution for yet another reason as India does not want to interfere in the internal affairs of other countries. Thus voting for or against a resolution that affirms the “political independence, unity and territorial integrity of Ukraine within its internationally recognized borders” would have given different signals.

Moreover, unlike UN Security Council resolutions, the Ukraine resolution passed by the UNGA is a dud. It is only a diplomatic document for records sake and carries no legal weight. Countries like Armenia, Belarus, Bolivia, Venezuela, Cuba, North Korea, Zimbabwe, Nicaragua, Russia, Syria, and Sudan who voted against the resolution are obviously willing to recognize Crimea as part of Russia.

Understandably, India did not want to take an all-white or all-black stand on the issue and preferred a grey approach by abstaining because of its possible political and diplomatic repercussions domestically.

The issue at the core of the Crimea crisis is whether the referendum held in the Autonomous Republic of Crimea and the city of Sevastopol on 16 March 2014 was valid or not. By taking sides on this referendum India may find itself in a sticky situation over the issue of Jammu and Kashmir.

Moreover, the following paragraphs in the Ukraine resolution made it all the more necessary for India to stay aloof from this Russia-West spat:

Noting that the referendum held in the Autonomous Republic of Crimea and the city of Sevastopol on 16 March 2014 was not authorized by Ukraine:

Moscow’s eastward turn is not a reaction to sanctions

1. Affirms its commitment to the sovereignty, political independence, unity and territorial integrity of Ukraine within its internationally recognized borders;

2. Calls upon all States to desist and refrain from actions aimed at the partial or total disruption of the national unity and territorial integrity of Ukraine, including any attempts to modify Ukraine’s borders through the threat or use of force or other unlawful means;

Indo-Russian bilateral relations are set to go from strength to strength in the coming months. This writer understands that if India is pressured by the West with an “us or them” kind of option – an unlikely scenario – India would never ditch Russia.

The writer is a New Delhi-based journalist who tweets @Kishkindha.