Will of Crimeans led to reunification with Russia - Alexander Kadakin 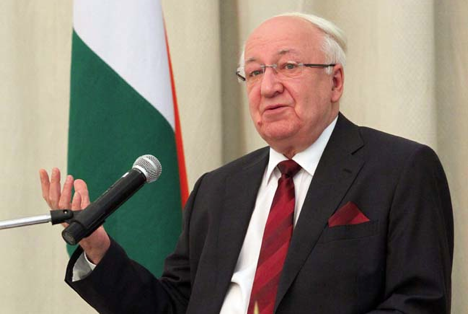 Alexander Kadakin said that Russia was grateful for the support it received from India and China. Source: Embassy of the Russian Federation in the Republic of India

The Russian ambassador to India tells Frontline that Moscow had no choice but to accept the genuine aspirations of the people of the peninsula, which has traditionally and culturally always been a part of Russia.

It was the will of the people of Crimea that led to the reunification of the peninsular region with Russia, the country’s ambassador to India said in an interview with Frontline. “The will of the people was the guiding beacon for the Russian authorities,” Alexander Kadakin told the magazine, adding that the hardline approach taken by the interim government in Ukraine towards the Russian language exacerbated the sitation.

“The Crimean situation is different from similar cases around the world,” Kadakin said. “First and foremost, in 1954, Khrushchev whimsically decided to gift Crimea to Ukraine, where he was once the Communist Party chief. Never before had Crimea been with Ukraine. The Russian empire had fought three major wars with the Turks for Crimea and it was only during the time of Catherine the Great that complete possession of Crimea took place.” The ambassador added that more than one million Russians perished in the three Russo-Turkish wars.

Kadakin said the region faced severe neglect since the break-up of the Soviet Union. “World-famous resorts there have fallen into ruin. Kiev was more preoccupied with its internal political struggles.”

The ambassador scoffed off US President Barack Obama’s assertion that Russia was a merely a regional power. “Only God can judge whether Russia is a regional or a superpower, and the American President is not God. What would you call a country that has the capacity to destroy the planet a thousand times,” he questioned.

Kadakin also expressed displeasure with talk that Russia should not be allowed to attend the G20 meeting in Australia. “Their discourteous language about Russian membership in the G8 and the G20 was unwarranted. If the G8 has done its job, so be it, but it is not up to any G20 member to either expel or not invite another member state. We are not bound to those formats and do not consider it a badge of honour,” the ambassador told Frontline. “The G8 is just a gentleman’s club with no consequence. The G20 is definitely more important.”

He added that Russia was grateful for the support it received from India and China. “President Putin in his Kremlin speech after the incorporation of Crimea emphatically thanked the Indian and Chinese governments for their far-sighted and objective position. He also singled out India for its constructive approach,” Kadakin told the magazine.