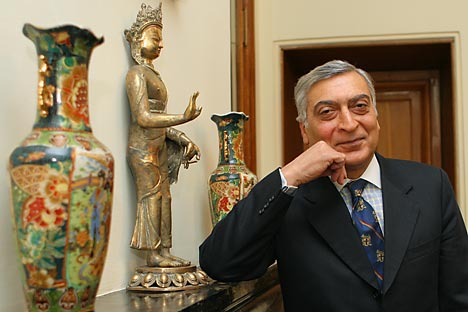 Kanwal Sibal: "The BRICS countries want a cooperative system in which their role and their views count." Source: Sergei Kuksin/Rossiyskaya gazeta

Career diplomat and former Foreign Secretary of India Kanwal Sibal talks to RT about the growing cooperation between the members of the increasingly influential bloc.

You have said the Western policy towards Moscow is aimed at toppling the Russian political order from within and making Europeans less dependent on Russia. Why does the West want that?

Because they haven't got over their Cold War mentality. Russia is still the largest country in the world despite the fact that the Soviet Union collapsed. It has very powerful strategic forces and it still has a considerable influence globally and sitting right next to Europe, where there are small countries, there is a sense of Russia looming very large. The Baltic states, especially, and some central European states like Poland and some others, are looking to the United States to defend themselves against what they might think can be a possible Russian threat in the future because they probably understand Russia will not be kept down and sooner or later they will face a resurgent India. And they want to make sure that Russia is geopolitically so weakened, and the threat to the Western Europe and to the NATO alliance reduced as much as possible.

So Russia has been expelled from the G8 global gathering. Realistically speaking, how big of a blow is that? And also isn't the membership in G20 where economies on the rise have a say, more important?

Actually expelling or suspending Russia from G8 to my mind does not make any sense. After all, if there are differences between the West and Russia – what is required is dialogue and negotiation. And to some degree this negotiation is continuing, as [Russian] Foreign Minister Lavrov is meeting [US] Secretary [of State John] Kerry, President Putin has spoken to President Obama, and then the Western countries are themselves pointing out, the US is pointing out, that there are so many areas in which they expect cooperation with Russia to continue.

So therefore suspending Russia from the G8 to my mind is pandering to domestic lobbies and to extremist opinion within the US and others. It is, to my mind, not serious diplomacy. You cannot afford not to talk to a country like Russia. Therefore, frankly I think they are admitting that is a failure of diplomacy on their part.

Russia is saying the G20 may eclipse the G8 as a leading international forum. Do you feel the same? Could that happen?

Yes. In fact that was the intention, that after 2008 global crisis, which was caused by the banks of the United States of America, and the very weak regulatory mechanisms, and the liberty given to hedge funds to engage in all sorts of financial speculation - which caused such havoc in global economic markets, and the realization that the Western countries, US and Europe, were heading for low growth, economic stagnation, recession, that the G8 itself could no longer deal with the global economy and that, what was needed then was international cooperation, much more deep international cooperation in terms of meeting the challenges – and hence the idea of the G20.

So the G8 to that extent receded into the background. And the primary discussions and decisions with the regard to jobs, global growth, combating the financial crisis, devolved onto G20. And in the G20, the emerging markets and others, and would-be emerging markets, would-be members. So yes, to my mind the G20 was intended to supersede the G8.

You have said that the United States conduct is reinforcing the need to rebalance the international system which at the moment is tipped towards the West. What are the main mistakes US is making?

Western sanctions are a wake-up call

I think, in their obsession with human rights, minority rights and democracy and the crusades that they have launched to impose these ideas globally, they are causing a great deal of instability all over the world. If you look at all the hotspots of the recent years, whether it was Iraq or Libya or Syria, or the break-up of Yugoslavia, etc., etc., or for that matter, the rise of terrorism, which is a country that is responsible for the rise of terrorism by actually involving extremists and fundamentalists, Islamic elements into the fight against the former union in the first place.

So if you look at the whole package of problems that we are facing today. Who is behind this, whatever the intentions, leave aside. Even for a moment, if you accept that this was done with good intentions, who is behind it? It is the United States of America and the West, Russia is not involved. So the cause of instability is the tendency to interfere in the internal relations of others, to question the sovereignty of countries, to develop new norms, which then are used as instruments to change regimes and impose democracy and push forth market economy in the countries so that US and other corporations get access to these markets. These are the factors if instability.

Like you have said the BRICS countries represent a fifth of global gross domestic product and have high geopolitical importance in their separate regions. Yet the West is dismissing it and calls it artificial grouping. Is it a self-defence mechanism?

Now BRICS therefore causes concern to the Western countries - at least it has caused a great concern when it was first set up because we thought this was a good platform for promoting multipolarity and that each of the countries was going to become a fulcrum of influence within the regions in which they are… Those who started attacking it, saying we are not democracies, that our geopolitical systems are very disparate and their interests collide with each other. I think BRICS has shown the capacity to move forward. Of course, we should not minimize the hurdles that lie ahead. But BRICS is becoming more and more a reality.

You've also written that the BRICS nations are against regime change, interference in the internal affairs of sovereign nations, politicizing human rights and humanitarian intervention. So is BRICS club essentially anti-West?

I don’t think that BRICS are anti-West. Nobody needs to be anti-West. What they are against are the excesses of the West and the tendency of the West to dominate and, as I said, to create the kind of norms which give them the moral platform, they believe, to interfere in the internal affairs of other countries and go in for regime changes and this and that. And that has caused immense misery to the populations of the countries in which they intervene.

So BRICS, I think, can act as a corrective. But certainly I don’t think that BRICS intends to confront the West in any way. I think the BRICS countries want a cooperative system in which their role and their views count.