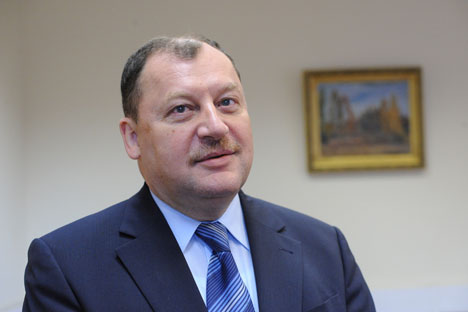 Vadim Lukov: "Given that the IMF leadership is in the hands of the Western states, there is little hope for the IMF aid, if anything happens." Source: RIA Novosti / Sergey Pyatakov

Russia’s Sous-Sherpa to the G8 says negotiations are on between the BRICS members on the distribution of the initial capital for the bank.

The development bank and the pool of currency reserves of countries of the BRICS group (Brazil, Russia, India, China, South Africa) will begin to work in 2015, and the capital of both will be $100 billion, Russian Federation’s Sous-Sherpa to the G8, Russian Foreign Ministry's Ambassador-at-Large Vadim Lukov said on Thursday at a conference of the young leaders of the BRICS at MGIMO University.

“Another line of economic cooperation is the negotiations on the creation of the BRICS development bank and currency reserves pool,” Lukov said. “I would like to note considerable progress in this area. The bank’s draft charter has been prepared, and an intergovernmental agreement on the bank creation is being developed. The draft charter has been prepared by Brazil, and Russia is drafting the intergovernmental agreement.”

According to the diplomat, the parties have agreed on the charter capital with the total volume of $100 billion. “Negotiations are currently underway on the distribution of the initial capital of $50 billion between the partners and on the location of the headquarters,” the diplomat continued. “All the BRICS participants have expressed a major interest in locating the headquarters at their place.”

Touching upon the issue of pool of currency reserves, the Russian emissary noted that the parties had agreed on its size of $100 billion. “The pool is created for emergency aid that may be granted to a BRICS member - in situations where the state budget deficit exceeds a certain threshold value,” Lukov explained. “Traditionally, such aid has been granted for decades through the IMF (International Monetary Fund), but their resources have depleted now. Most of them are used for saving the euro one day and another day - the national currencies of developed countries. Given that the IMF leadership is in the hands of the Western states, there is little hope for the IMF aid, if anything happens. So, the pool of currency reserves would be quite a good thing.”