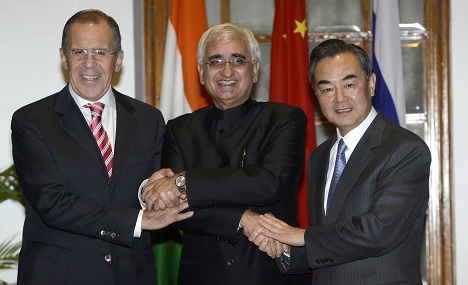 The rise of India and China will shape the world order post-Crimea. Russia’s close relationship with these two countries will help it in the crisis. Source: AP

The global balance of power has diffused, or rather gravitated towards Asia with India, Russia and China as crucial players.

The developments in Ukraine have evoked memories of Cold War rivalries.  It is difficult at present to predict whether the developments will actually lead to a new Cold War or the fiery tensions will cool down with the passage of time. The flaring up of tensions in Ukraine’s east, the sanctions and the intransigent positions of the conflicting parties do not portend that everything will be settled down in a peaceful manner. In this context, some issues must be kept in mind while analyzing the developments in the Ukraine, including the separation of Crimea, and their possible implications for the evolving world order.

The foremost element to be factored is that the power dynamics among nations now are different from the Cold War world. And post-Crimea is not post-Afghanistan (of 1989). Imagine the 1980s or even early 1990s, when the Cold War was at its fag end, and the countries like India and China were not emerging powers. Now India and China, along with Russia, have formed common platforms like RIC and BRICS, and add to this equation the G20 and SCO – the balance of power is certainly not concentrated in any one part of the world. It has diffused, or rather gravitated towards Asia with New Delhi, Moscow and Beijing as crucial players.

Shifting dynamics and their impact on the global order is recognized by all the powers including Russia and the US, but both have used and interpreted the changing equation in different ways. For Russia, the rising groups like BRICS, G20 and SCO can help salvage Moscow from the current crisis. It is no surprise that Vladimir Putin expressed thanks to Indian and Chinese leaderships for their positions on Crimea. Recently the BRICS leaders expressed strong reservation against ideas mooted by some powers that Russia might be banned from the G20 meeting. This must be soothing to the Russian leadership. The BRICS as a collective body and also its members including India, China and Brazil separately have deliberately refrained to go against Russia regarding the Ukrainian crisis. Any further distancing between Russia and the West will leave the latter with no options but to build a closer relationship with the BRICS members including India.

The US is interested to pull India and China out from the Russian embrace. Washington sufficiently realises that a closer relationship between the BRICS countries, particularly of India i and China with Russia, will negatively impact its policies towards Moscow. Hence, one of the recent US policy manoeuvres is to persuade India and China to isolate Russia. One of the US officials expressed this policy in very clear terms, “We are actively working on the diplomatic side to isolate Russia and that means with countries like China and India and others”. However, the realization of a policy will be really difficult.

Economic diplomacy will be the key in determining the efficacy of such a policy manoeuvre, besides the strategic considerations. The attempts on part of the Europe to diversify its energy resources (which will not likely happen in near future) and reduce its dependency on Russia will drive the latter towards energy hungry countries India and China.

Indian disenchantment with the US has in a sense has further strengthened its relationship with Russia. The Obama administration, unlike the Bush Jr. administration, has not effectively cultivated a relationship with India. Despite differences, the Bush era witnessed a closer Indo-American bilateral relationship. A different calculation by Obama and more emphasis on Pakistan and Afghanistan at the cost of India has contributed to such disenchantment. China has played its economic card more effectively, and its rising ambitions in the Asia-Pacific and the South China Sea are at odds with the US objectives in the region. Hence, the recent US attempt to wean away India and China from Russia’s fold will be very difficult.

BRICS in its statements on the Ukraine crisis has advocated a path of reconciliation and peace, but the developments may not corroborate this principle of the BRICS. In that case, any intensification of Russia-US rivalry will polarize the world, pushing BRICS to weigh in favour of Russia. With BRICS providing political support, the G20 providing the needed economic cushion and the SCO providing security architecture to Russia, the world scenario will indeed be different than it was in the last decade.

The post-NATO withdrawal from Afghanistan and likely instability in the country will provide the grouping another leverage in the region. In fact their geographic proximity itself is an advantage which the Western countries including the US do not enjoy vis-à-vis Afghanistan and other conflict spots in the Eurasian region.

The post-Crimea world order, hence, will be different from the world order prevailing during the Cold War or during the early 1990s. The proliferation of international power and the rise of India and China, and the groupings like BRICS, will shape the world order post-Crimea. Russia’s close relationship with these two countries will help it in the crisis.