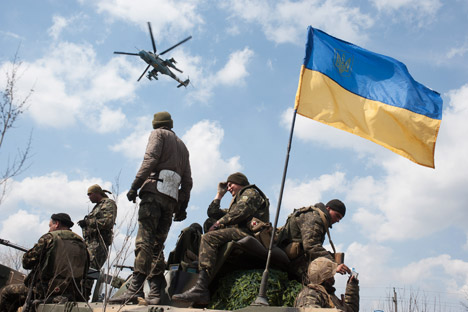 The EU Observer reports that the European Commission has almost completed work on what the EU calls "tier three" sanctions – designed to hurt the Russian energy, financial, and arms sectors. Source: AP

There are fundamental differences between Russia and the West as to what constitute appropriate measures to de-escalate the crisis in Ukraine. RIR looks at the possible options for resolving the impasse and how the situation could develop from here.

“De-escalation” these days seems to be the most widely used word in international politics but concurrently the hardest to realize. It appears to mean different things to different parties to the Ukraine crisis. Possible scenarios depend on the interpretation of what de-escalation really means, say most experts.

The West wants Russia to de-escalate what it sees as its encouragement of disturbances in the largely ethnic Russian and Russian-speaking eastern Ukraine.

To Russia these disturbances are a popular reaction to the escalation of nationalist and anti-Russian rhetoric in Kyiv, which is beginning to translate into forceful suppression of what Moscow sees as the legitimate rights of the local population. So de-escalation, as President Putin told Chancellor Merkel over the phone, amounts to talks to return the situation to one of peaceful cooperation.

But Kyiv is caught between far too many influences from all sides, says Vladimir Zharikhin, deputy director of the Institute for the Commonwealth of Independent States. “If the decisions were down just to the acting president Turchynov and acting Prime Minister Yatsenyuk, it would be easier to offer possible scenarios of future developments. But they are under pressure from Washington, Brussels, Moscow and even Maidan. It’s not easy to move in any direction in such circumstances.”

The thrust right now appears to be to suppress the unrest in the East, says Zharikhin. But this will only drive it underground. And if it turns into bloodshed, Russia will have no choice but to intervene.

This is an ‘outlier’ scenario, according to Steven Eke, a senior analyst with Control Risks, a leading consultancy in the field of international security. A full-scale Russian military invasion of eastern Ukraine, he says would result in a civil conflict that might tear the country apart and would probably require international intervention to resolve.

India calls for restraint in Ukraine

However, Dmitry Trenin, director of the Moscow Centre of Carnegie Endowment for International Peace, believes that “at the moment, Russia does not have to and probably does not intend to move its military forces into south-eastern Ukraine.” Moscow, he says, “puts Kyiv in front of an unpalatable dilemma: to use force, and possibly precipitate the country’s break-up, or to passively watch the proliferation of self-styled “people’s republics” and lose control of the south-east.”

This worries the West as much as, if probably not more than, Kyiv. “As it is, Ukraine and the West have ceded Crimea to Russia”, writes Judy Dempsey, editor-in-chief of the Strategic Europe publication. “With Crimea signed away, the West has to find ways to defend the rest of Ukraine.”

Vladimir Zharikhin has a feeling that the authorities in Kyiv are “crossing the Rubicon between negotiation and force under pressure from the West and Maidan, since they understand the dangers and futility of such action.” Hence, he says, now we are seeing a demonstration of force rather than the use of force.

Probably this show of force is just a ruse to derail the Geneva talks on Thursday between Russia, the U.S., the EU and Ukraine, says Zharikhin. He is not sure that the outcome of the talks would suit Kyiv’s interest.

The expectation is, as John Lough, Associate Fellow, Russia and Eurasia Program at Chatham House puts it, that “at the Geneva talks, Russia is likely to push for a timetable for rapid constitutional reform, arguing that there is no alternative given the chaos engulfing the eastern regions. But the government in Kyiv and Western countries might not agree to Moscow’s proposals.”

The EU Observer reports that the European Commission has almost completed work on what the EU calls "tier three" sanctions – designed to hurt the Russian energy, financial, and arms sectors. French FM Laurent Fabius said EU leaders might call a summit next week to implement the measures if the Geneva talks fail.

However Vladimir Zharikhin is skeptical about the likelihood of really biting sanctions. “The current EU leadership is on the way out”, he says. Indeed, Britain's William Hague indicated the EU is still undecided on what would trigger the introduction of new sanctions. "The situation can develop in many ways, so it [the trigger] is not laid down in any detailed way," he told journalists.

Dmitry Trenin of the Carnegie Moscow Center believes there is still a chance to prevent a messy multi-sided civil war. This chance can only be used, however, when parties inside and outside Ukraine rise to their responsibilities. Americans, Europeans, Russians, and Ukrainians themselves need to jointly discuss urgent economic steps in finance, energy, and trade, linked to a constitutional framework which would provide for a sort of balance within Ukraine and in its international relations and affiliations. A failure to come together on this issue would turn Ukraine into a failed state or a battleground in a new confrontation.”

The most probable scenario, according to Steven Eke of Control Risks, is that Ukraine remains an unstable country into the longer term, with a pro-EU/Western president and government coming to power after 25 May. Russia does not invade eastern Ukraine, but relations with Moscow remain troubled, and subject in particular to trade and other economic restrictions/sanctions. Economic growth is slow, with the economy troubled by a large foreign debt and poor levels of foreign direct investment. Social divisions, including ethnic, religious and linguistic fissures, continue to undermine the integrity of the state.

As a credible alternative, the coming to power of a pro-Russian administration could actually lead to greater long-term stability by removing the immediate cause of destabilization in the east. However, this would represent a ‘fudge’ and remove any impetus for cleaning up the business environment or tackling corruption. In this less likely scenario, Ukraine would maintain close economic links with Russia, while preserving the more viable of its economic ties with the EU.