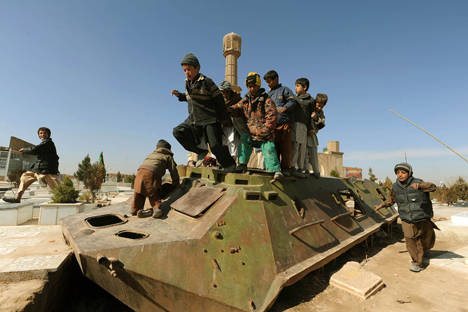 Regarding order and stability in Afghanistan, India and Pakistan have key roles to play. Source: AFP / East News

The location of Afghanistan, and its ethnic composition, and historical and cultural relations with countries in the Eurasian region make it a zone of interest to the SCO members and observers including India and Pakistan.

As international attention is focused on the developments in the Ukraine, the meeting of SCO officials last week in the Tajik capital Dushanbe received relatively low attention. But a look at the agenda of the meeting amplifies its significance. The key issue that the group deliberated upon is the Afghan conflict and prospects of peace after the withdrawal of the International Security Assistance Force (ISAF) forces. Regional peace and stability, tackling traditional and non-traditional threats such as terrorism and drug-trafficking, and the establishment of a SCO security center are some other issues that surfaced during the meeting.

Afghanistan is certainly a major concern of the SCO members given their geographical proximity to the country. Perhaps the SCO is one of the most appropriate forums to discuss the issue as it holds security as a key rationale behind its existence. The International Security Assistance Force (ISAF) found it really difficult to bring rival factions together in Afghanistan. The failure of ISAF in realizing peace is undoubtedly a concern. Equally, its departure and post-departure prospects are matters of concern. The Secretary of the Russian Security Council, Nikolai Patrushev, who participated in the meeting, observed, “Russia and its SCO partners share their concerns over a possible negative development of the situation in Afghanistan after this year’s planned withdrawal of the International coalition forces”. The resurgence of the Taliban, the suppression of the individual rights, proliferation of religious extremism, terrorism, and drug trafficking to neighbouring regions are some of the prospects that heavily surfaced in the calculations of the SCO members. The further sliding of Afghanistan into chaos will also depend on the kind of dispensation that the Afghans elect to power. A leader like Abdullah Abdullah may be inclined to support policies to counter the Taliban. The unfolding of the Afghan situation, hence, will depend on internal and external factors and how they gel with each other. To quote Patrushev, “Much will also depend on the outcome of (the republic’s) presidential elections.”

The SCO’s assertion that force is not an effective tool to address the Afghan crisis is certainly a welcome development. Application of external force has rather hardened the indomitable spirit of the hardliners. The SCO secretaries in their statement “expressed support for the Afghan people’s efforts towards national reconciliation, a peaceful rehabilitation and revival of the country under the guidance of Afghans and by Afghan people themselves”. In a sense, the past mistakes by various powers have provided a lesson to the SCO members. At the same time, the members will be interested to cooperate with the Afghan leaders and the people to establish a peaceful society. The location of Afghanistan, and its ethnic composition, and historical and cultural relations with countries in the Eurasian region make it a zone of interest to the SCO members and observers including India and Pakistan.

In a book recently published by the SCO Studies Centre at Shanghai, titled ‘The Shanghai Cooperation Organization: Its Progress and Prospect,’ the authors argue that the SCO has evolved in the last 13 years and transcended its traditionally conceived role of security guarantor. The book rightly pointed out that besides security, the members need to focus on cooperation in economic, political and cultural domains. It also argued that “although the mainstream of the SCO is still cooperation, the cooperation cannot be further deepened without paying attention, studying and resolving existing problems”. China has mooted the idea of establishing a Security Centre to address the security threats including the threat of cyber terrorism, of which it claims to be a victim. The Chinese representative expressed preparedness “to study, together with all the SCO member states, the possibility of establishing an SCO centre to fight against challenges and threats to security”.

Regarding order and stability in Afghanistan, India and Pakistan have key roles to play. Both are currently observers of the SCO. Their full integration with the Eurasian body will be beneficial not only to them but also to the current members and Afghanistan. History provides ample proof how the Silk Road trade from India to Central Asia and Persia went through what is now Pakistan and Afghanistan. The integration of India and Pakistan, and also Afghanistan, with the SCO will not only bring the rich knowledge and ideas, emanating from the past associations, of these countries to the organization but also help them address the conflict peacefully, which the organization now openly espouses.

The integration of India and Pakistan with the SCO will also bring many other advantages for all. It will open up floodgates of opportunities for cooperation. It will help in devising policies for flow of energy from the north to the south – from Russia to India and Pakistan, and from Russia to China. It will help activate the ideas of IPI and TAPI pipelines, currently held hostage to geopolitical differences. It will also help the ISAF in its departure – whether through the north through the northern distribution network, or through the south through Pakistan, or even India. It will also help Russia to expand its network through Central Asia and Pakistan towards Arabian Sea and Indian Ocean. It may not be farfetched to argue that the mutual cooperation will pave the way for Eurasia to emerge as an integrated economic zone.