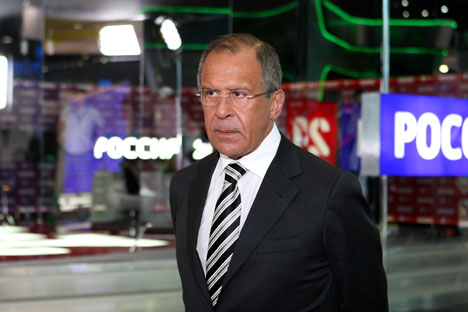 Sergey Lavrov: "Nothing which was agreed in Geneva and which certainly is for the authorities in Kiev to start implementing was done by them." Source: ITAR-TASS

The Russian Foreign Minister talks to RT about the explosive situation in Ukraine and the importance of all sides following the agreed-upon Geneva framework.

So, just the other day Joe Biden on his visit to Kiev said that time is short for Russia to make progress on its commitments made in Geneva. What is expected of Russia?

Well, it’s difficult to say because I discuss this almost daily with John Kerry. And frankly the American colleagues chose to put all the blame on Russia, including the origin of the conflict and including the steps which must be taken. They accuse us of having Russian troops, Russian agents in the east and South of Ukraine. They say that it is for the Russians only to give orders and the buildings illegally occupied would be liberated and that it is for the Russians to make sure that the East and South of Ukraine stops putting forward the demands for the federalization and the referendum and so on and so forth. This is absolute…you know…switching the goal post if you wish.

In Geneva we all agreed that there must be reciprocal approach to any illegitimate action in Ukraine, be it in Kiev, be it in the West, be it in the East, be it in the South. And the people who started the process of illegitimate actions must step back first. It is absolutely abnormal due to any norms in a European city that Maidan is still occupied, that the buildings in Kiev are still occupied and in some other cities, that those who put on fire the buildings belonging to Communist party headquarters in Kiev, the buildings belonging to the Trade Union headquarters are not even under investigation. I don’t even want to mention the sniper cases because everyone forgot about those snipers. And we only hear that “Let’s concentrate on eliminating terrorist threats in the East and in the South”.

So in Geneva we all agreed that there must be end of any violence. Next morning or next afternoon Turchinov declared almost a state of emergency and ordered the army to shoot at the people if the people are engaged in peaceful protests. In Geneva we agreed that there must be total rejection of extremists and the Right Sector is still very active, and after Geneva the Right Sector staged provocations killing several people in the vicinity of Slavyansk during Easter Sunday. So nothing which was agreed in Geneva and which certainly is for the authorities in Kiev to start implementing was done by them. Yes, they introduced a draft law on amnesty. But our reading of this law indicates that this is not for political prisoners. Yes, they announced a pause in what they call “counter terrorist operation”. But now that Joe Biden visited Kiev this counter terrorist operation was declared in the active phase again. Well, it’s quite telling that they chose a moment of vice-president of the United States visit to announce the resumption of this operation because the launching of this operation happened immediately after the John Brennan’s visit to Kiev. So I don’t have any reasons not to believe that the Americans are running the show in a very close way. 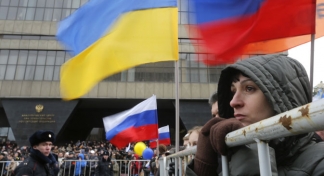 Well, you have called on John Kerry to actually put pressure on the government in Kiev and on its behaviour. But does it really mean that you can see America has decisive influence on the country?

I think this is absolutely the case. Not on the country. On the regime which took power in Kiev. They have I think overwhelming influence. They act in much more open way without any scruples compared to the Europeans. Europeans try to be a bit more subtle. And the fact that…you know, there are so many reports about the role of the CIA in analyzing the situation and in being present in Ukraine, including the building of the Security Council of the Ukrainian State, occupying a floor. Then there are numerous reports which were revived recently on what was the role of the American embassy during the events in Maidan - direct interaction and communication with the activists who were armed and who were planning the actions like storming the buildings and other illegal acts.

All this has not been denied in the way which would be persuasive. And, yes, when you get daily phone calls from John Kerry telling you: “You must, you must, you must” and when you understand how many thousand kilometres the United States is away from Ukraine and then you see how agitated they are about seeing their sponsored people not really delivering on the things which are obvious then you cannot avoid the impression that they are running the show very much.

But what about Russia? Well, I know Russia has reiterated many times that it doesn’t recognize the legitimacy of the government in Kiev, but nevertheless diplomatic meetings are held on high levels in Geneva, I remember in the Hague, the meeting of the Foreign Ministers as well, does Moscow have any leverage over Kiev?

Not over Kiev. No, not at all.

What about the Eastern Ukraine?

In the East the people revolted after several months of total neglect of their interests. And when they saw what happened in Kiev through Maidan, through the Right Sector, other extremists, the sniper fire killing dozens of people, then immediately all those who were against the Yanukovich government were granted amnesty, which is not happening now to the people who just engage in political activities in the east and in the south. So, yes, we see what were the reasons for the revolt in the east and in the south. They just don’t want a repetition what happened in Kiev and what was attempted in Crimea, by the way, and these people, of course they want to be friendly with Russia, they have many Russian relatives, they listen very carefully to what Russia says. But these people are not puppets. We cannot just guarantee that they will be ready to take for granted whatever promises they hear from Kiev. They are fed up with words, they need real deeds. The regime must withdraw the order to use the army against the people, the regime must liberate political prisoners, they must start doing what they committed themselves to on 21st February signing the agreement, which said “surrender illegal arms”, they must start disarming the Right Sector and they must stop just saying “we will invite the regions to a constitutional reform process”.

They must sit down with them and instead of going abroad - you know, I heard that Yatsenyuk is going to the Vatican, I think the better place to go for him would be south. When he went there a week ago he only met with the people whom he himself appointed, he never got to the people who were protesting . And that’s where the current authorities in Kiev need to be now, If they really pretend to represent the entire country.