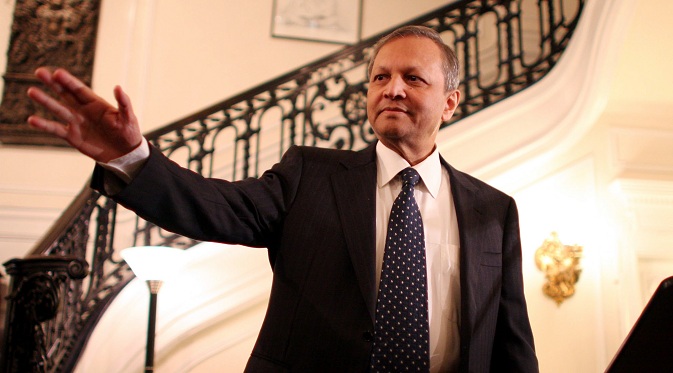 Ronen Sen: "Our relations with the former Soviet Union and the Russian Federation have had the characteristics of special relationships." Source: AP

One of India’s most illustrious retired diplomats talks to RIR about the geopolitical tensions between East and West and India’s foreign policy challenges.

In a diplomatic career that spanned over four decades, Ronen Sen served as India’s ambassador to Russia, Germany and the United States, as well as the high commissioner to the UK. He talks to RIR about the tensions between Russia and the West over Ukraine, the need for global cooperation on issues like Syria and Afghanistan and India’s current foreign policy.

What do you think caused the political crises between Russia and US? Is it just the situation in Ukraine or are the roots?

I think that it was not just the situation in Ukraine, because this is not the beginning and it is not the end of tensions between the US and Russia. I do not want to go through the long list of problems which both countries have had. You had Russian concerns on the western missile defence installations proposed to be located in Poland and the Czech Republic. You had US concerns on the asylum given to (Edward) Snowden. Even when you resolved some problems, new ones appeared. Like the Jackson-Vanik Amendment linking trade with alleged human rights issues which had existed since the 1970s. When this US legislation faded out in 2012, immediately at the same time the Magnitsky list was introduced. This led to Russian counter-measures.

But what is more important fundamentally, and I witnessed this from Moscow immediately after the break-up of the Soviet Union,  is that some of those old problems were not resolved and there was the constant push westwards in CIS countries by NATO and the European Union. I saw tensions grow in Georgia and Moldova. This is the continuation of those events. Of course it is more serious, and tensions are very high, but it is not entirely new.

The world is facing many challenges these days. And none of the countries can resolve them alone. For example, the civil war in Syria, the situation in Afghanistan and piracy in Indian Ocean. Do you think that attempts of US to isolate Russia and impose sanctions in this context are justified?

I do not think that sanctions serve the purpose for which they are intended. We have reservations on both their propriety and utility. India had faced such kind of sanctions earlier from United States and some other countries.  I am sure that these sanctions will serve no purpose because they will bring no changes unless the parties try to resolve issues peacefully. Both sides should seek for cooperation, not confrontation, because this is important not only for two countries – US and Russia – but also for cause of international security. Nuclear non-proliferation issues in North Korea and Iran,  the grave situation in Syria, issues related to the eastward expansion of NATO and EU, the challenges posed by terrorism, climate change, cyber security and other problems need the collaboration of major powers and restructuring of the international order.

It is well known that US prefers to talk with all countries under the garb of a superpower. India is not an exception. We remember the recent diplomatic scandal with Indian diplomat Devyani Khobragade in New York. How will India's support of Russia impact the relations between Delhi and Washington?

I do not think so. Obviously, some of our friends in US were disappointed by our position in the UN regarding Ukraine. But there was no great surprise nor were people completely taken aback. Because we are fairly consistent on some issues. And our relations with the former Soviet Union and the Russian Federation have had the characteristics of special relationships. From the moment of break-up of the USSR we treated Russia not just as one of the fifteen successor states but as the state-continuator of the USSR. This is an important difference. That was reflected in number of agreements. India may have been the only country that repaid all its Soviet-era debts not to all 15 successor states but totally and solely to Russia. Even when we have not actively supported Russia we have certainly never opposed Moscow. So regarding to US stance of India's position, we can say disappointment – yes, surprise - no.

There are some suspicions that US actively participated in overthrowing Ukrainian president Viktor Yanukovich. It was not only political support, but financial, when some NGOs were given money from US institutions. Do you think that such behaviour is relevant these days?

Unfortunately Ukraine is not just the beginning. Even in the midst of the process of European integration and after the formation of the European Union, we had witnessed the disintegration of Yugoslavia, the setting up of independent states. And it took place in heart of Europe. The competing pressures of eastward and westward integration led to conflict in Georgia and the independence of South Ossetia and Abkhazia. There are also reports of renewed tensions in Moldova. So we have to look at this these issues in their totality and hope that there is will be dialogue to resolve all problems without recourse to intervention or interference.

This is obviously regrettable. But we should go beyond it. Not only to address this issue but other aspirations of regions, though language is an important element of any identity. This step has to be reversed. You have to respect sensitivities and aspirations and interests of all citizens. And we had in the 1994 Moscow Declaration spelt out the measures for protecting the interests of pluralist states. If you look at this document, it was the first international document to talk about the post-Cold War threats. Both India and Russia have multiracial, multi-ethnic, multilingual, multi-religious societies. So we face particular problems. And both also happen to be federal in structure. We also pointed out in the same document that the both recognize that the biggest threats are posed by religious extremism, terrorism and secessionism. So it is vitally important to maintain the unity and territorial integrity of states. I hope that the new constitution that is being proposed will take into account the interests and aspirations of all citizens and all regions and that the devolution of powers and privileges will be in the framework of the unity and territorial integrity of Ukraine. And presidential, parliament and local elections should take the place in such a situation.

Do you think that present Ukrainian government capable to fulfil this task?

The EU brokered agreement, brokered, as you remember, by foreign ministers of Germany, France and Poland, had proposed that there should be first the process of setting up a new constitution and then under the framework of this constitution other steps would be taken before a new government assumed office. But unfortunately what happened was that was process was short-circuited by the violence in Kiev. But now we have a new government, an interim and unelected one, which is struggling to find its feet. So we have a very unusual and fluid situation.

What do you think about the decision of people of Crimea and Sevastopol to join Russia which was made by a referendum?

How unshakable is territorial integrity?

You know, Crimea is completely different. There is some understanding globally because of provocations which resulted in actions been taken in that area, Crimea. But if this action is repeated anywhere else, there will be negative reactions all across the world. That's a reality also that Russia had accepted in the Budapest agreement also, on avoiding economic pressure, on respecting territorial integrity, including the Crimean peninsula. Though the feeling generally is that there was provocation in Kiev, clear outside interference and involvement by totally unsavoury characters like “Right Sector” and neo-Nazi elements, which led to the may be unpopular but legitimately elected president being deposed. So because of these provocations we have seen all these actions in Crimea. This region has a long history related to Russia, not Ukraine. Even in Soviet times it was very Russian. I remember going to Sevastopol in 1970 for the first time. And I thought I had visited a typical Russian city, an absolutely Russian city. In other places in Ukraine you can make out that you not in Russia, even in Kharkov. Even Lugansk and Donetsk. But not Sevastopol.