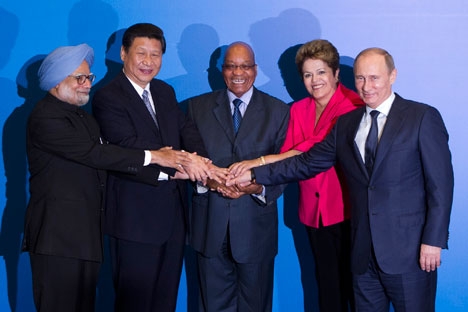 The issue of enlarging the BRICS group of countries is part of the multilateral dialogue in the group. Source: Reuters

Three out of five members of BRICS support Argentina’s bid to join the club, the Indian ambassador Amarenda Khatua to Buenos Aires said this week.

Argentina is not an obvious candidate if the BRICS countries decide to enlarge the group with new members, the Executive Director of the National Committee on BRICS Studies in Russia told RIA Novosti Tuesday.

“If a decision to enlarge BRICS is taken, there are much more obvious candidates such as Indonesia, representing also Islamic civilization which BRICS as a multi-civilizational union now lacks,” Georgy Toloraya said.

Three out of five members of the BRICS group of emerging economies support Argentina’s bid to join the club, the Indian ambassador Amarenda Khatua to Buenos Aires said Monday, according to the Clarin news agency.

The diplomat said Brazil, India and South Africa have backed the initiative, while Russia and China have yet to express their views.

Deputy Russian Foreign Minister Sergei Ryabkov told RIA Novosti that the possible accession of Argentina must be considered carefully. “We have a constructive approach towards any requests of this kind, whoever sends them,” Ryabkov said Tuesday.

He added that the BRICS format is in a developing stage. “That's why any issues on further expansion of the BRICS group need to be worked out fully and thoroughly.”

“As far I know, it has not been discussed at any level, including experts’ track within BRICS,” Georgy Toloraya said.

“Moreover, the BRICS have agreed on a moratorium to accept new members. IBSA [India, Brazil, South Africa] – a southern ‘wing’ of BRICS – might be interested in more cooperation with Argentina and it is certainly the Indian Ambassador’s job to promote cooperation between his country and the host country, which might be the reason for the comments, but I would rather judge the position of other BRICS countries first hand,” Toloraya told RIA Novosti.

The issue of enlarging the BRICS group of countries is part of the multilateral dialogue in the group, Ryabkov said. He added that the countries have dialogue on different levels and will meet at a summit in Brazil’s Fortaleza in July. “So the members of the BRICS will have a chance to discuss the issue [of enlargement] in detail.”

“I would be surprised also whether Brazil is ready to push for Argentina’s candidacy given the competitive nature of relations. Also the debt problem of Argentina should be taken into account,” Toloraya said.

At the same time, Indian Ambassador Khatua noted that after the BRICS summit in Brazil, the next Prime Minister of India will pay a visit to Buenos Aires. Chinese President Xi Jinping is also expected to travel to Argentina during a tour of Latin America scheduled for July.

Brazil, Russia, India, China and South Africa are currently working on setting up a BRICS development bank as an alternative to the Western-dominated World Bank and the International Monetary Fund. The idea was proposed by India at a 2012 meeting of the organization’s finance ministers in Mexico.