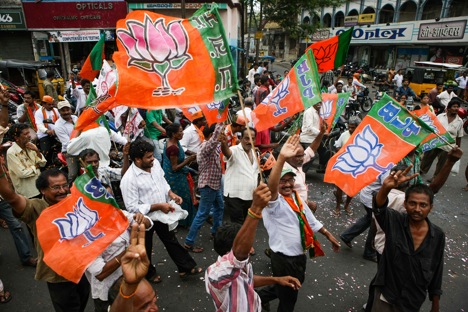 Alexander Kadakin, Russia’s ambassador to India, and Kanwal Sibal, former India’s foreign secretary and ambassador to Moscow, expressed their opinion on the outcome of the Indian elections.

Alexander Kadakin. Source: Embassy of the Russian Federation in the Republic of India

How do you think the outcome of this election will change Indian politics? Where is India going?

Alexander Kadakin: I do not foresee any fundamental changes because with all these inherited problems of the social ills and sometimes inefficiency India is steadily moving towards acquiring the status of a super-power in the making. I the last decade the GDP growth in spite of the ups and downs has been not less than 5 percent, at times touching the plank of 9 percent.

The scale of the national ballot is impressive indeed. In a country of 1.2 billion citizens and nearly 1 million polling stations voting process of 9 stages lasting almost a month, you can easily imagine how great the event has been. We have every reason to congratulate the friendly nation on this success. As to your question, according to the incoming results, the former major opposition power, the BJP, is returning to the helm with the prime minister candidate Mr. Modi. We highly respect the verdict of the people of India. As far as Russia-India friendship and strategic partnership go, we do not know foresee and don’t expect any policy change whatsoever. We shall march ahead. This relationship is deep-rooted in a broad national consensus in the two countries. We have had an exceptionally productive experience of cooperating with the party coming to power – the BJP. And it was during BJP previous winning that the historic declaration on strategic partnership with Russia was signed by President Putin and then-Prime Minister Vajpayee.

Do you think now we will see a correction of the extreme pro-American slant?

Alexander Kadakin: First of all, I would not agree with you that India has been pro-American lately. In my view, it is wrong because India is a future super-power, a great power in the making, and has the freedom of selecting and choosing friends and it is absolutely normal for such a global players like India to have good relations with the US, as Russia wants to have good relations with the US. And I would not qualify Indo-American relations as a tilt towards the US or pro-American actions.

To what extent do you think this election can change US-Indian relations and do you think there can be a personal chemistry between president Obama and Prime Minister Modi?

Kanwal Sibal: The fact that Modi’s visa was cancelled in 2005 and even when Europe and the EU changed its approach to Modi, the Americans didn’t do so, we certainly had a negative feeling, especially considering the reason for denying him the visa. He has been the most proceeded man in terms of inquiries and cases and special investigation units and legal processes and the Supreme Court has said there is nothing that Modi is guilty of. So, for the Americans to believe that somehow their own judgment on Modi’s accountability in 2002 superior to the decision by the Supreme Court is arrogance. They have been denying it but I think it will affect the personal chemistry.