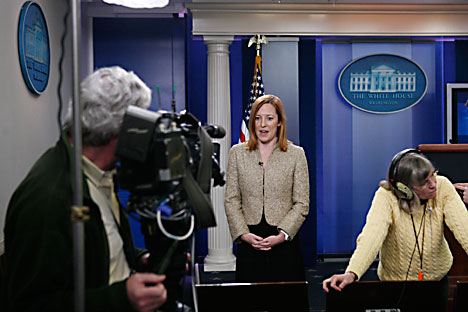 The internet has become the principal battleground for the new breed of state-sponsored information war, and neither East nor West is afraid of getting its hands dirty.

The Ukrainian crisis has seen the largest diplomatic confrontation between Russia and the United States since the Cold War, with rhetoric on both sides growing sharper as events have unfolded. A key feature of the conflict has been the uncompromising information war waged by both sides in the media, with the internet playing an increasingly significant role as a forum for the parties to promote their interpretation of events.

However, one of the most noteworthy aspects of the online propaganda conflict has been the open participation of state organs in the debate. For the first time, journalists, experts and those with something to say have been joined on the internet barricades by representatives of the U.S. State Department and the Russian Foreign Ministry, as both sides fight to make themselves heard above the din.

One of the most popular State Department initiatives was the establishment of the UkrProgress account on Twitter, which already contains 7,000 short messages in Russian. More than 14,000 people are following the account, the majority from the Russian Federation and Ukraine.

The fight for good news

This account has criticized Russia's actions in a much freer style than the official statements. For example, the photos of so-called “American mercenaries” in Ukraine published by the Russian media have been labelled by UkrProgress as “a cheap trick by the Kremlin”. UkrProgrss often retweets American diplomats and embassies around the world, including the U.S. embassy account in Moscow (which has 23,000 subscribers).

Videos have also appeared on YouTube on Ukrainian-Russian subjects, filmed by order of the State Department (this is specified in the description). For example, not so long ago a video appeared on the UkrProgress channel on YouTube entitled “Sanctions: what they are and how they affect Russia”. In the video, the announcer explains in Russian (albeit with a noticeable accent) the essence of the Washington-imposed punitive measures against Moscow and claims that they have already had an effect. Such State Department activity is all the more surprising, given that earlier the Office tended only to publish speaking officials on YouTube.

The Russian Foreign Ministry became active on social networks relatively recently, but intensified its activity with the start of the Ukrainian crisis. The ministry’s website has been the target of frequent DDOS cyber-attacks, and social networks channels have become an important platform for the agency to express their position. Since the beginning of 2014, the ministry’s social network pages have boosted its numbers of subscribers several times over: Its Facebook account has 63,000 followers, and its Twitter account (in Russian and English) has 312,000.

In late April, a story began to circulate widely that the Foreign Ministry had begun using the proposed State Department hashtag on the Ukrainian theme for its own purposes. U.S. diplomats had begun adding the #UnitedForUkraine hashtag to their posts after the words of Barack Obama: “We are all united for Ukraine.”

Initially, most of the entries contained criticism of Russian policy in Ukraine. But when the hashtag gained popularity, the Foreign Ministry decided to turn the situation to its advantage, and the Russian Diplomatic Office started using it in its own tweets. In response, U.S. State Department spokesman Jennifer Psak wrote on her Twitter account: “The world stands #UnitedforUkraine. Let’s hope that the #Kremlin & @mfa Russia will live by the promise of hashtag”. This post attracted numerous sarcastic comments on the network, such as “retweet my enemy – my enemy” and “it seems that hashtags is the new diplomacy.”

The Foreign Ministry, in contrast to the State Department, does not have a special department tasked with dealing exclusively with “digital diplomacy”, or any other corresponding departments in its embassies. However, it is possible that similar work is being done by private entities commissioned by the presidential administration.

Such data, gathered from anonymous sources close to the administration, has been cited by Chief Editor of the TV channel Dozhd, Ilya Klishin, in a column written for the Vedomosti newspaper. These structures were presumably involved in the manipulation of public opinion through new media tools, first and foremost, by posting comments on media sites and social networks.

Two weeks ago, site moderators from the British newspaper The Guardian warned readers that some of the comments were part of an “organized campaign in support of the Kremlin.”

The gloves are off

PIR (Center for Policy Studies in Russia) expert Oleg Demidov gave the Kommersant newspaper two reasons why the Ukrainian crisis caused an abrupt “digital” confrontation between Russia and the United States: “The position of the Ukrainian society, as well as the global community, is changing fast and is very dependent on promoting a convincing interpretation of events.

“Moreover, because of the deterioration of bilateral relations between the Ministry of Foreign Affairs and the State Department, the gloves finally came off, so to speak, and a mutual slugfest broke out over the internet.”

According to Demidov, judging by the “unprecedented activity of the MFA,” Moscow learned its lesson from losing the information war over its invasion of Georgia in 2008. “The actions of the Russian Foreign Ministry and the Department of State cannot be directed at an objective account of events – but in terms of information warfare this problem shouldn’t even be at the forefront,” he said.

Report compiled from material published by Kommersant and Vedomosti.