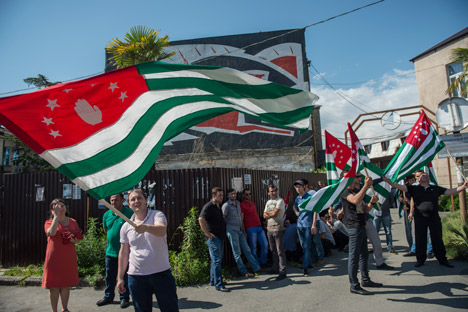 Despite a quick coup that led to the resignation of President Alexander Ankvab, the republic by the Black Sea remains pro-Moscow.

Earlier this week, the president of the former Georgian republic of Abkhazia Alexander Ankvab resigned under pressure from the opposition. Abkhazia’s fourth president will be elected on August 24. In the meantime, Parliament has appointed Valery Bganba, the speaker of the republic’s supreme legislative body, as acting president.

Crisis struck early last week in this Black Sea republic, which enjoys limited recognized sovereignty. The Coordinating Council, created a year ago as a sign of union that includes 11 leaders of various parties and movements, announced a national gathering. This democratic tradition stems from ancient times. It was decided that the most important issues in Abkhazia would be resolved with the participation of as many people as possible. Ankvab, who worked as president of the republic for less than three years of his five-year term as designated by the constitution, officially announced his resignation at this gathering.

One would have to be totally uninformed about Ankvab to think that the opposition could achieve easy success. He was a tough leader in the last the Georgian-Abkhazian war, a survivor of six peacetime assassination attempts, and nicknamed “Iron.” In short, he is not the type to go down easily. At first, Ankvab reacted in his signature style – he broke off talks with opponents and left Sukhumi as soon as opposition supporters stormed the government house. A few hours later, he made a televised address to the nation in which he described the situation as a coup attempt and advised the opposition to return to legal means. Then Moscow intervened.

While recognizing the sovereignty of Abkhazia, but also declaring itself the guarantor of peace and security in the republic, as well as by providing three-quarters of Abkhazia’s budget, Russia simply could not remain indifferent to the events. The crisis in Ukraine has already heightened Russia’s level of attention to goings-on near its borders.

Presidential aide Vladislav Surkov, who arrived to resolve the situation in Abkhazia, was welcomed by all parties. The situation was a stalemate: the parties refused to negotiate, tension was rising, and a large number of President Ankvab's supporters were “camping” dangerously close to a national gathering, which did not help to dissolve the opposition.

Surkov had to run between Sukhumi, where the opposition was located, and Gudauta, where the president had moved. His shuttle diplomacy contributed to the peaceful resolution of the conflict. On Sunday, “Iron” Ankvab resigned.

Abkhazian political scientist Inal Khashig told this writer that Surkov had chosen a pragmatic line. Surkhov’s main task was to understand which external forces can control or stand behind the processes in Abkhazia, and whether or not they actually do. “There are no such forces,” continued Khashig. “All the Abkhazian political elites are oriented towards Moscow. In this situation, when the fate of Abkhazia depends on Russia to an extremely high degree, starting with security and ending with financial support, which the country cannot do without, it couldn’t be any other way. Abkhazia has no pro-Western, pro-American, or even any ‘pro’ forces, except for the pro-Russian forces.”

After making sure that the republic and its entire political elite are more than loyal to Moscow, Surkov realized that it makes no sense to support Ankvab, who is losing influence. After all, whoever replaces him will not change pro-Russian Abkhazia.

The story of Abkhazia’s third president once again shows that the division between public acceptance and rejection is very low. A bold, principled politician and a good head of the security agencies proved to be a weak manager. His opponents blame him for the fact that in the slightly more than two years of his reign, the republic has fallen into absolute financial dependence on Russia, and Russian economic assistance has been squandered.

Khashig discussed another problem that Ankvab did not address. “No national idea was formed during his presidency. The first president of Abkhazia, Vyacheslav Ardzinba, won the war of independence with Georgia. During the second presidency, that of Sergey Bagapsh, the republic's sovereignty was recognized by Russia and several countries. The crisis began long ago, but now there is a fork in the road. This is specific of Abkhazia. For years nothing will change, but it only takes a few days to turn everything over,” Khashig said.

In late August, Abkhazia will elect its fourth president.  So far, no politician has discussed becoming head of the republic. But judging by the activity in the days of Ankvab’s removal, we can assume that the main contenders for victory are former Vice President Raul Khajimba and former Prime Minister Sergei Shamba. The winner will have one task – to reform government institutions and redistribute powers between the branches of government in order to ensure effective governance and prompt economic reform. Abkhazia is tired of complete financial dependence on Russia.