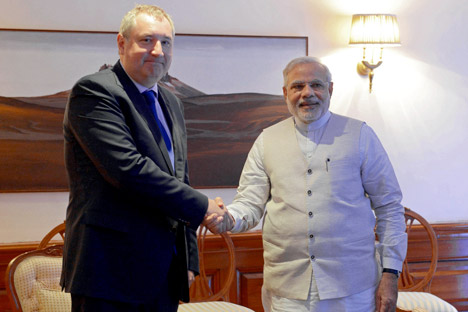 The stage is now set for the first bilateral talks between Narendra Modi and Vladimir Putin on the sidelines of the BRICS summit in Brazil.

Russian Deputy Prime Minister Dmitry Rogozin’s visit to India last week came at a critical juncture for both countries, with the level and regularity of diplomatic engagement set to rise. In his meeting with Indian Prime Minister Narendra Modi, Rogozin conveyed Russian President Vladimir Putin’s desire to work with him to further strengthen the special and privileged strategic partnership between the countries and also to take this partnership to an even higher level.  Modi said that he looked forward to “a productive, informative meeting at the summit with President Vladimir Putin this year.”

These are not just good-natured remarks exchanged at the protocol gatherings. The meeting between Rogozin and Modi took place on the day when Australia, under pressure from the US, imposed sanctions against Russia. And Moscow, on the same day announced that due to the sanctions imposed by Japan, on account of the events in Ukraine, bilateral contacts are being reviewed

“India follows an extremely pragmatic diplomatic approach,” noted Vladimir Yevseyev, director at the Centre for Public Policy Research. “It does not desire to create problems for itself with the United States. Nevertheless, India is aggressively pursuing a development course to become a centre, which at some time in the future might turn out to be global. And from this point of view, India cannot afford to follow the course taken by Australia, and does not wish to proceed in that direction. For India, even in negotiations with the U.S., the presence of Russia in the Indian market is essential - in the nuclear field as well as in the arms market. India takes a principled position on the safeguarding and possible growth in relations with Russia and this fact is becoming the most serious problem for the United States. The US attempted to strongly influence China into playing down its relations with Russia and got rebuffed. Now the US is trying to put pressure on India to spoil its relations with Russia. And they are facing the same kind of resistance, but in a tougher form.”

Rogozin confirmed that Russia will retain its strategic presence in India, primarily, by increasing cooperation in the fields of nuclear energy, space exploration and space technology. And also - joint development of the multi-purpose transport plane and the fifth generation fighter aircraft. The creation of samples and development of unique weapons and military equipment in joint ventures in India will be another priority in the cooperation between the two countries.

In recent years, there were difficulties in the implementation of energy and defence contracts. In order to minimize these risks, during the talks it was agreed upon to establish a “working group on complex projects”. For each of the problematic issues, this group is supposed to swiftly charter out a roadmap and propose solutions to the intergovernmental commission on cooperation.

Yet another working mechanism is planned to be set up to monitor the implementation of strategic projects. And their numbers will increase as a joint “road map” is scheduled to be created in the field of investment. Sources close to the negotiations said that the sides are in favour of swift development and signing of a new agreement on support and mutual protection of investments.

It is especially important because Indian oil and gas companies intend to participate in the development projects of energy resources in Siberia, the Far East and the Arctic shelf of Russia. India’s oil and gas bellwether ONGC and Rosneft are considering working together for the development Yurubcheno-Tokhomsky gas condensate field in the Krasnoyarsk Region. Indian Oil Corporation is also contemplating on becoming a partner of Russian companies in projects for the production of liquefied natural gas (LNG). Experts believe that the joint development in LNG projects, along with the high demand for natural gas in India will translate relations in the gas sector into a primary and strategic segment in the Russian-Indian partnership.