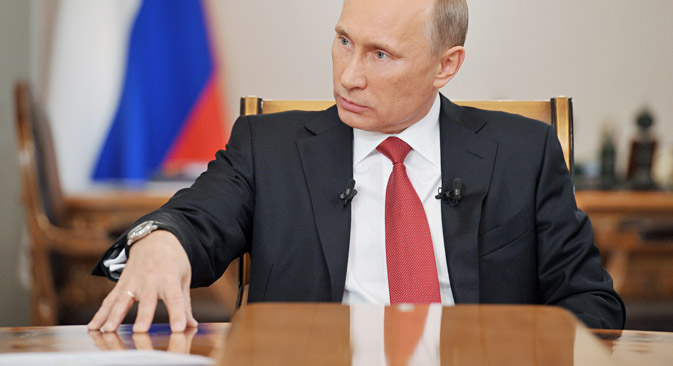 Ahead of the BRICS summit, the Russian President talks about the prospects of the grouping and how it can play a role in the settlement of regional conflicts.

What is on the BRICS Summit agenda, and what plans do you, as the Russian leader, consider important to discuss with your partners at the summit?

The modern world is indeed multipolar, complex, and dynamic – this is objective reality. Any attempts to create a model of international relations where all decisions are made within a single ‘pole’ are ineffective, malfunction regularly, and are ultimately set to fail.

Those are the reasons why the interaction format proposed by Russia for such influential states such as the BRICS members has proved to be needed. Our joint efforts have truly contributed to enhancing predictability and sustainability in international relations.

The forthcoming summit's theme is Inclusive Growth: Sustainable Solutions. Therefore, we will consider the most urgent issues in global politics and the economy, as well as the BRICS development.

I believe it is time to raise the BRICS' role to a new level and to make our association an unalienable part of the global management system for sustainable development.

How can this be practically achieved?

First of all, to develop cooperation in the UN in every possible way, persistently counteract individual states' attempts to impose on the international community the policy of displacing unwanted regimes and promoting unilateral solutions to crisis situations. We propose to create a mechanism of regular high‑level consultations between our foreign ministries on different regional conflicts to agree, where possible, on common positions and joint efforts to ensure their political and diplomatic settlement.

We should coordinate BRICS policy more actively and counteract security threats and challenges, including counter-terrorism. Among other ways, this can be achieved through the mechanism of counter-terrorism consultations. An important place on the agenda will be devoted to expanding cooperation to combat drug trafficking. We are ready to build up joint efforts to reinforce the international legal regime of drug control.

Cooperation in setting rules of responsible behaviour in the global information space is another important issue. Such rules must be based on the principles of respect for a country's sovereignty, non-interference in domestic affairs, observance of human rights and freedoms, as well as equal rights for all countries to participate in Internet management. I think our joint efforts will ensure that the BRICS countries hold a leading position in strengthening international information security.

We are planning to shape a joint information policy in the international arena to support BRICS’ activity and to present a more unbiased picture of the world.

Naturally, we are going to thoroughly analyse the situation in the planet's hotspots. Those include Syria and Iraq, where the positions of extremist and terrorist groups are gaining strength. Serious attention should be given to the crisis in Ukraine and the international community’s measures to stop the bloodshed in the southeast of the country.

In the economic sphere, we are going to discuss the IMF reform. The BRICS countries are concerned about the unreasonable delay in holding a debate of this subject. This jeopardizes all the efforts of G20 in this direction. In the meantime, it is the case of fulfilling the rightful demands of "new economies" to balance the IMF according to the 21st century reality.

One more important question we are going to raise at the summit is the increasing cases of unilateral sanctions. Recently Russia has been exposed to a sanction attack from the United States and its allies. We are grateful to our BRICS partners who have criticized such practices in different forms. At the same time, substantive conclusions should be drawn from the current situation. Together we should think about a system of measures that would help prevent the harassment of countries that do not agree with some foreign policy decisions made by the United States and their allies, but would promote a civilized dialogue on all points at issue based on mutual respect.

What kind of progress has been made in realizing plans to develop economic interaction within BRICS? Do you believe it is possible for the BRICS countries to elaborate specific joint plans of action in response to different challenges?

We intend to actively develop trade and economic ties within the association. The BRICS member countries’ share in Russian foreign trade balance is rising steadily: last year it was 12.5 percent, but in the first four months of this year it has already reached 13.1 percent. Despite instability in the international economy, the volume of the BRICS countries' mutual trade is increasing (in 2013, it was over $300 billion).

It is in our common interest to use the complementarity of national economies to the maximum. Cooperation opportunities are great indeed. This is the market with almost three billion consumers. The BRICS countries have unique natural resources and a substantial technological, financial and industrial potential.

On Russia's initiative the BRICS’ Economic Cooperation Strategy is being drafted at the moment. It will focus on creating preconditions for accelerated economic development and strengthening the international competitiveness of our countries, the expansion and diversification of trade relations, and ensuring interaction for innovative growth. A number of prospective cooperation ventures are being studied to make sure the document is backed by concrete investment projects.

I will note that last year our countries’ businesses established the BRICS Business Council. This institution is still to fully realize its potential, but we have already started work to identify and eliminate barriers that impede business interaction within of the association.

It is clear that all the BRICS economies need serious infrastructure modernization. Our initiative to establish the Development Bank is aimed at expanding cooperation in this sphere. In the year since the Durban Summit, we have managed to achieve significant progress in this direction. In the near future, we expect to finalize all the remaining issues and we will be able to use this Bank's potential to realize major projects in our countries.

Another important initiative that is underway is creating a BRICS pool of foreign currency reserves. It will become a safety net to help us form a joint response to economic challenges.

I would like to emphasize that both the Development Bank and the foreign currency reserves pool are practical steps for our countries, intended to strengthen international financial architecture and to make it more balanced and just.

The BRICS countries have shared attitudes towards other modern challenges in the economy, including the prompt completion of the Doha Round Negotiations, creating a more just global trade system and ensuring transparency in regional trade agreements.

How solid can a union of countries exists if the majority of them do not have common borders? Are there any plans to reinforce a political element in BRICS and add a military aspect to these countries' interaction?

In the modern world the factor of common borders does not play a defining role. On the contrary, global processes encourage us to join efforts as challenges and problems become shared. In the BRICS case we see a whole set of coinciding strategic interests.

First of all, this is the common intention to reform the international monetary and financial system. In the present form it is unjust to the BRICS countries and to new economies in general. We should take a more active part in the IMF and the World Bank's decision-making system. The international monetary system itself depends a lot on the US dollar, or, to be precise, on the monetary and financial policy of the US authorities. The BRICS countries want to change this.

Another long-term common interest of the association’s members is strengthening the rule of international law and the UN’s leading role in the international system. To be honest, without Russia’s and China's principled position on Syria in the Security Council the events in that country would have followed the Libyan and Iraqi scenario.

Is expansion the right approach for BRICS?

Certainly, the BRICS countries intend to strengthen the political element of our cooperation. That is why we will develop the practice of mutual consultations and joint actions in international organisations, first of all, in the UN. In the long term, we will create a virtual BRICS secretariat. At the same time, I would like to stress that we do not have any plans to form a BRICS military and political alliance.

In March, there was information that Argentina may become the sixth BRICS member. This idea was supported by three of the five member countries – India, Brazil and South Africa. What is Russia's attitude to it? Is the expansion of BRICS advisable? What are the criteria for other countries’ possible accession to BRICS?

Russia welcomes the Argentinean authorities' intention to work more closely with BRICS. It is quite possible for BRICS to enter into strategic partnership with Argentina, as with other big developing countries, in both politics and the economy.

However, the expansion of BRICS is not being considered in practice at the moment. First, we should work out the numerous cooperation formats already created within of our union.

There are no strict criteria for other states’ accession to BRICS. Each case is considered individually.

On the whole, today, more and more countries see the potential of this association. That is why, in the future, the issue of gradually expanding BRICS is likely to be raised.