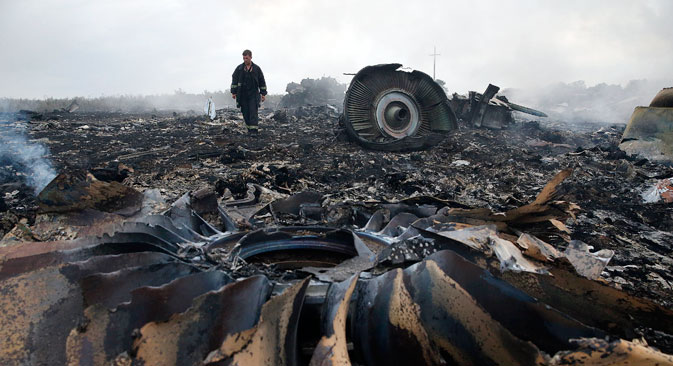 According to one of the main versions, the Boeing 777 crash was caused by a missile launch. Source: Reuters

RIR asked the leading Russian experts to assess how the political situation changed after the Malaysia Airlines disaster and how relations between Russia, the United States, and the European Union will now develop.

Sergei Karaganov, political scientist, dean of the Faculty of World Economy and International Affairs at the National Research University of the Higher School of Economics

The future of international relations will depend on what the investigation of the Boeing crash concludes. If the investigators prove that the pro-autonomy militias are guilty, Europe will consider Russia to have been indirectly implicated, which will leave an unpleasant aftertaste.

If it turns out that Russia was more than indirectly implicated, relations will deteriorate not only at a cultural level, but also on the political level. It is too early to say who is guilty. As they say, when a war is under way, “black swans” (unforeseen catastrophes) certainly happen. The Boeing crash is confirmation of that.

The sanctions imposed by the West have already partially succeeded in slowing down Russia’s development. However, they are undermining the basis on which international economic ties stand.

The U.S. and its allies have deployed a weapon that is a danger to them – the Bretton Woods system, on which Russian, American, and European soft power is founded [Karaganov is arguing that the recent coordinated political action by the West amounts to a re-adoption of the first international monetary system, which concentrated power in a small number of states – RIR].

Targeted sanctions are expediting the international system’s transition towards the system on which it was previously built. President Obama is hoping that Russia sends its troops into Ukraine. After all, as we remember from history, the operation in Afghanistan facilitated the collapse of the Soviet Union.

Alexander Konovalov, director of the Institute of Strategic Studies and Analysis

The Boeing 777 crash was a dark day for Russian foreign policy. The conflict in Ukraine was not previously at the epicenter of Europe’s attention, but now that situation has fundamentally changed. Brussels will go much easier along the path of American political sanctions, regardless of whether or not that is fair to Russia.

Of course, the investigators could make the sensational discovery that the plane was hit by Ukrainian air defense as a conceived military operation. But that is unlikely. Why would the Ukrainian armed forces shoot down a civil aircraft?

Russia’s once brotherly relations with Ukraine have eroded even further. Kiev and Moscow took many steps to ruin everything immediately after Russia’s reunification with Crimea. Cooperation in the military-industrial sector will be minimized in the foreseeable future.

The Ukrainian company Motor Sich in Zaporozhye produces engines for Russian helicopters. Marine fuel is produced in Nikolayev. Of course, Moscow will initiate import substitution, but that will take time. Ukraine is lost to Russia for the long haul.

Russia’s relations have begun to sharply deteriorate not only with the West, but with the entire world. Australia and Malaysia, which lost citizens in the tragic plane crash, are of the strong opinion that Russia is, at a bare minimum, indirectly guilty of the catastrophe, thanks to speculation in the press.

In the last few days, President Putin has desperately been trying to reduce tension, which was very characteristic of his late-night address. Incidentally, the president’s speech was aimed primarily at the U.S. and President Obama, who will initiate the West’s next steps.

The problem that most unnerves Putin is economic sanctions. Europe previously resisted pressure from the U.S., but now it will be easier for Obama to cooperate with Brussels on sanctions.

Sergei Mikheyev, director of the Center for Political Trends

By and large, the average European did not previously have much interest in Ukraine. Now the situation has taken a front and center position in Europe’s sphere of interests. The U.S. is continuing its drive to convince Brussels of the need to radically spoil relations with Russia.

Some are playing along, while others are cautiously demanding facts and evidence that the pro-autonomy militias and Russia were involved in the terrorist attack.

The Ukrainian authorities are attempting to bring the situation to emotional and irrational heights. They have voiced their aim to declare the [so-called] Donetsk and Lugansk People’s Republics international terrorist organizations.

This would allow the authorities to draw a parallel with al Qaeda and the situation in Afghanistan in the minds of westerners in the future, as well as to express the need to involve a western coalition in the Ukraine situation.

How will Russia assess this situation? We need to understand that America and Europe are not the whole world. Yes, they are some of the strongest players, and our relations with them are important, but we need to look elsewhere, as well. We need to prove to everyone who is willing and who is not willing to hear how the situation really is. We need to solidly defend our position on the Boeing matter.

For the majority of European states, it is not beneficial to follow the Americans. It would not work in their favor to make Russia guilty – even indirectly – of the tragedy. But amid all the tragedy of the situation, it would be favorable for many parties if the Boeing tragedy remained another mystery. There is no evidence confirming that Russia is directly guilty. Nor is there any evidence confirming that Ukraine is directly guilty.