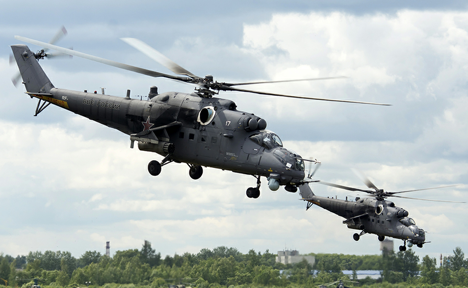 Indo-Russian defence cooperation in projects such as BrahMos and the production of the SU-30MKI planes is being used a model for joint development with Brazil and South Africa within BRICS.

Last week, Anatoly Isaykin, general director of Rosoboronexport (the sole Russian government agency for the export and import of military products) told the mass media that negotiations between Russia, Brazil and South Africa on the joint development of weapons and military equipment within the framework of BRICS should be held by the end of this year.

“For the time being, we are working directly with each country, but we are also thinking on collaborative projects involving several countries at once. In particular, three-party negotiations between Russia, Brazil and South Africa on joint development of military products have been scheduled for this year,” said Isaykin.

The head of Rosoboronexport added that at the end of September, a large international arms exhibition will be held in South Africa, at which matters of military cooperation within the BRICS will also be discussed. Also, by the end of 2014, Russia may sign a contract with Brazil to supply Pantsyr-S1 (Armour-S1, NATO designation is SA-22 Greyhound) air defence missile and cannon systems to this country.

Till date, Russia has had no experience of defence interaction with South Africa and Brazil, except for some sale of air defence equipment to the latter. In the 1990s, the possibility of South Africa equipping its Mirage fighters with Russian made engines was discussed, but those words remained words, says head of the Analytical Department of the Institute of Political and Military Analysis, Alexander Khramchikhin.

Igor Korotchenko, a military expert and chief editor of National Defence magazine believes that cooperation between Russia, Brazil and South Africa could take place, for instance, on the same Pantsyr-S1 systems.

“The plan is to set up production of Russian weapons that will then be supplied to the markets of smaller states in the respective regions,” says Korotchenko. “In this case, South Africa is the gateway to the African market, and Brazil is the gateway to the Latin American one. Of course, these should be relatively inexpensive weapons, which would be relatively easy to produce and would see demand in those markets, especially in the African one, where there are just a few high-budget countries. At the same time, Uganda, for instance, has purchased Russian fighter jets worth $740 million. In other words, those who want to strengthen their defences do have the money.”

He noted that Russia’s cooperation with India sets a good example. “An example of this is the cooperation between Russia and India: we have a licensing contract for SU-30MKI planes currently being implemented,” Korotchenko says.  “In this project, some of the components are produced by India itself, while others are supplied by Russia. Therefore, forms of interaction may differ, and this all depends on the level of the partner country.”

According to an assessment by the director of the Centre for Strategic Studies, Ivan Konovalov, implementing joint projects on development of weapons and military technology involving Russia, Brazil and South Africa within BRICS is a quite logical decision in the circumstances where the West has reduced Russia’s possibilities for manoeuvring in the joint development of weapons.

“Europe, at the present time, is cutting off contacts with us in the military industry environment; as far as China is concerned, most probably, we will simply share technologies with it; whereas only India is perhaps one of the few countries with which we are carrying out joint development projects at a high level. An example of this is the BrahMos missile, jointly being developed by Russia’s NPO Mashinostroyeniya OJSC and India’s Defence Research and Development Organisation” says Konovalov.

He noted that for Russia and Brazil it would be logical to develop joint projects in the field of ground-attack aircraft and military transport planes. “Brazilians have come far in the field of ground-attack aircraft. We can say that the Super Tucano aircraft manufactured by Embraer are quite popular internationally, and are used in the fight against insurgency and drug trafficking,” Konovalov adds. “As for military transport planes, here too it is possible to find common ground, especially taking into consideration that our cooperation with the Ukrainian state enterprise, Antonov, with which we have worked for so long, by and large, without result, is now most likely over.”

“As far as South Africa is concerned, since as far back as apartheid times, this country has achieved greater success in comparison with many other countries in the development of light armoured vehicles,” says the expert. “South Africans were constantly fighting on several fronts, so they know about armouring very well. An example of this is the MRAP machine gun vehicle protected from explosions. Therefore, cooperation with South Africa will be very useful for Russia in this field as well. Of course, in recent years, we have also made significant progress, but joint development projects are potentially a commercial success. Joint projects for both small arms and mine clearance systems are also possible.”

Konovalov adds that South Africa is interested in Russian helicopters.  “In 2013, the South African company Denel Aviation and the Russian Helicopters opened a service centre to repair and maintain Russian-made helicopters in South Africa. And this sector is also promising, although not in terms of joint development, but in terms of market participation for our companies.”

Konovalov believes that both Brazil and South Africa are interested in the development of a good product. “Naturally, both we and they only provide what we consider necessary. Let’s say, if you take the Russian-French Atom armoured vehicle project, which has now been shut down, we provided the cannon and the arms, and the French provided the body and the chassis. That is, each side develops its own systems. It is obvious that during any sale we provide documentation and drawings, but this is the law of the market. Again, for the Brazilians, the military industrial environment these days is not only a segment of the market but also a political issue.”

President of the Academy of Geopolitical Problems, Konstantin Sivkov, noted that the decision to jointly develop weapons and military equipment within BRICS is crucial from the military-political point of view, because it would enables us to set up a unified military industry environment.

“The news about the joint development of arms and military equipment within the BRICS demonstrates that the grouping is beginning to shift from a purely economic alliance to a military-political one, which is already a serious development,” says Sivkov. “From the geopolitical point of view, these developments are absolutely correct. Let's say, this is the same as the deal with China on gas: the profitability for us is small, but it is an extremely important decision that makes China our military and political ally. And we can already see proof of this: once the situation arose where we blocked the supply of food from Europe, China immediately gave us guarantees that it would supply fruit and vegetables to us, even though the Chinese have certain problems with food products.”

According to Sivkov, Brazil now claims the role of the geopolitical leader in South America and also the role of the leading power in the South Atlantic region. For this reason, it requires a powerful navy, powerful long-range military aircraft with a long-distance operational range and the relevant missile systems with which navy ships are usually equipped. Of course, neither Germany nor France will provide Brazil will modern technology, so the country is very interested in the development of joint projects.

“Any economic alliance will inevitably turn into a military and political one for one simple reason: once close economic cooperation begins between two countries, the question of protection of their interests immediately arises,” says Sivkov. “For instance, with today’s intensity in Russian-Chinese relations, we can safely say that a military alliance is being drawn up. The intensity of joint military exercises taking place by the two countries is comparable with that which the Soviet Union carried out with the Warsaw Pact countries,” says Sivkov.